EVIL DEAD Doesn’t Live Up To Its Potential 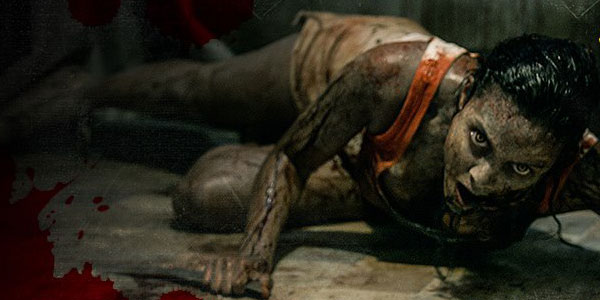 A triumph of Caro syrup over computer effects, the new Evil Dead excels at its wonderfully practical gore… but there’s not much else going on to back it up.

There’s a bunch of ways you can look at the new Evil Dead— as a remake of Sam Raimi’s classic, as a reboot/ sequel, or as its own beast entirely.  But regardless of how you look at it, this movie doesn’t quite hit its mark.  That’s a shame, as this is one of the rare remakes that not only had the blessing of the creators, but their active involvement.  And the concept, created by director Fede Alvarez, is a great one– retelling the classic Evil Dead story as a straight-up, balls to the wall horror movie without the campy schlock factor of the original.

But that becomes one of the biggest problems of the new movie– it’s not scary.  Alvarez proves himself time and again to be a solid director– his frames are tight and visually appealing, and he crafts some excellent moments consistently throughout the film, but these scenes never really come together as a whole, and they rarely build tension.

The other missing part of the equation is likeable characters.  Even in the first Dead, Ash was a likeable asshole, but here we really don’t have any audience surrogates, no one to identify with and really root for.  Jane Levy does her best as the lead, Mia, but her characters is saddled with nothing but missed opportunities.  Mia is a junkie, and the concept of the film is that her friends take her to the cabin in the woods so she can detox.  That’s an original and cool setup, and there’s a few moments toward the beginning when Deadite-possessed Mia is mistaken by her friends with going through a severe withdrawl.  It’s a fun concept to play with, but the entire cold turkey plotline is dropped completely about 25 minutes in.  There’s so much potential in that idea– Mia’s possession could have started as hallucinations in her head, with even she mistaking the demon for junk sickness, or hell, the Deadite possession becoming kind of a metaphor for her addiction– but instead it is entirely wasted.

To her credit, Levy isn’t afraid to get down and dirty, and her demonic scenes were by and large wonderful to watch. However, a bit too much fan service, tying this movie to its source material, stuck out like a sore thumb.  I was OK with the car, but Mia’s demon-fueled “I can smell your filthy soul” line didn’t work in this context.  By the time the chainsaw appears in the last act– in what’s clearly meant to be a cheering scene for audiences– I was getting pulled out of the whole experience.  The film is absolutely at its best when Alvarez gets to cast off paying homage to the original and tells his own story.

The most memorable part of Evil Dead really is the effects work, and as a piece of gorehound cinema it is an instant classic.  The sheer volume and remarkable quality of visceral, sludgy effects (virtually all practical) are a sight to see, and the film stands as a strong opposition to the watered down digital blood effects plaguing many modern horror movies.  And Evil Dead uses its gore to its advantage– while the film lacks many true scares, it revels in its brutal, bloody violence to great effect.  This is a movie more interested in showing the last few tendons snapping as a girl’s severed arm falls to the floor, than a jump scare ghost appearing in a mirror.  Both those elements are in the movie (often in the same scenes) but its clear that everyone involved wanted to keep the focus directly on the gore, and it’s a very good idea.

While some of the best “money shots” have been shown off in the trailers, there were still some excellent set pieces that were complete surprises.  They’re practical, and over the top, and they really, really work— I squirmed and clapped and winced and cheered many times as the madness escalated and the blood and guts flowed faster and faster.  It’s masterfully done, but ultimately feels a little detached– If I had been more connected to these characters, and had more of a stake in their story, I would have winced way worse as they pried nails from their bodies or faced the business end of a crowbar.

My criticism of Evil Dead doesn’t mean I hated it– in fact, I really enjoyed it for what it was.  The gory effects are at once a middle finger to modern Hollywood’s digital horror and a return to form for a big-time studio production getting its hands dirty with glorious practical effects.  The pacing is awkward and episodic, but it’s still a remarkably watchable movie, and the collected moments that hit are absolutely fantastic.  But there’s nothing worthwhile tying those incredible moments together.  The only real ligament on display is in the film’s bloody severed limbs… they should have saved some connective tissue for the story.