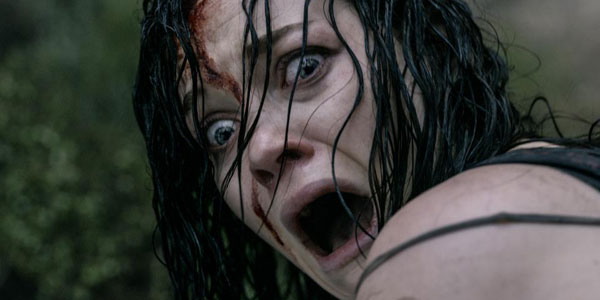 Evil Dead continues to sell the high concept idea that remakes do NOT have to suck.

YES, this latest Evil Dead trailer!!!  The new Red Band preview is making me even more confident in getting my hopes up for this movie.  The first trailer at New York Comic Con caught people offguard, with a seriously nasty hardcore vibe that nobody was expecting from the horror schlock classic known as fondly for its goofiness as its gore.  All the Evil Dead marketing since has really embraced that message, that this is one HARD R movie… and I love it!

But what I love even more is the new trailer itself.  This one goes way further than the first teaser, in regards to both the plot and the severity of this flick.  I love that the movie appears to feature so many familiar beats from the first Evil Dead, but they play out in a totally different, much scarier way.  At NYCC, director Fede Alvarez said he thinks of movie remakes like bands playing a cover song— it needs the right balance of familiarity with enough uniqueness to justify its own existence.  From everything we’ve seen so far, he really nailed that balance.

Equally great is Sony’s latest “Evil Dead will terrify the shit out of you” campaign, called Dare To Share Your Scare.  Fans can record a video of themselves as they react to the impressive new trailer, and then post that reaction video online.  It’s a neat gimmick, and it’s been building fast– the reactions keep piling up and they get kind of addictive to watch in and of themselves.

So, score one more for the great marketing team with their old school movie hucksterism and grandstanding that we just don’t see anymore.  And score a BIG one for this incredible new Evil Dead trailer!!  I’m excited… how about you?