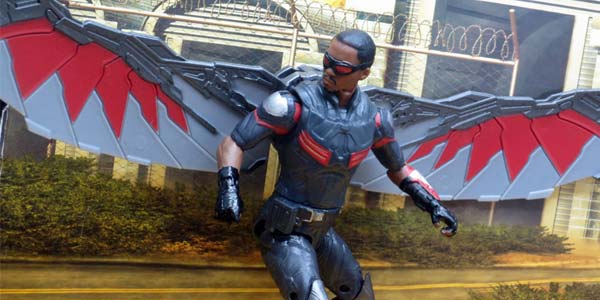 It’s interesting that for two years now– despite the absence of a proper mass market toy line– Hasbro has done a respectable job of keeping up with the ever-growing cast of Marvel Studios’ shared cinematic universe in 3.75″ scale.  The main focus of Civil War’s toy line was very much in the 6″ scale, but we still managed to see a new Cap with his motorcycle, Black Panther, and Agent 13 join the series… and now, finally, a film accurate toy of Anthony Mackie’s Falcon.

The 3.75″ Falcon is being touted as a one-off deluxe figure, not unlike Cap and his motorcycle… and while that seemed like a strange, cash grabb-y decision at first, having the figure in hand I can say he absolutely feels worth the extra dollars.  This is a truly excellent figure, superior in many ways to his larger 6″ Wal-Mart exclusive counterpart.

Let’s start with the sculpt, which is not only film accurate, but incredibly detailed.  Like Black Panther, the amount of intricacy worked into this figure belies his small size, and from the ribbing of his body armor to the very nice portrait of Mackie, this figure is great in a visual sense.  Falcon’s articulation is okay– it’s nothing to write home about, but clearly way ahead of the 5 point of articulation figures Hasbro has been employing recently.  The ball neck, shoulders, elbows and hips– along with double jointed knees and hinged ankles– let you pose this guy in a few cool action poses (flying or otherwise), but as is the case with all of Hasbro’s recent 3.75″ figures, the lack of torso articulation leaves him feeling limited and a bit stiff. 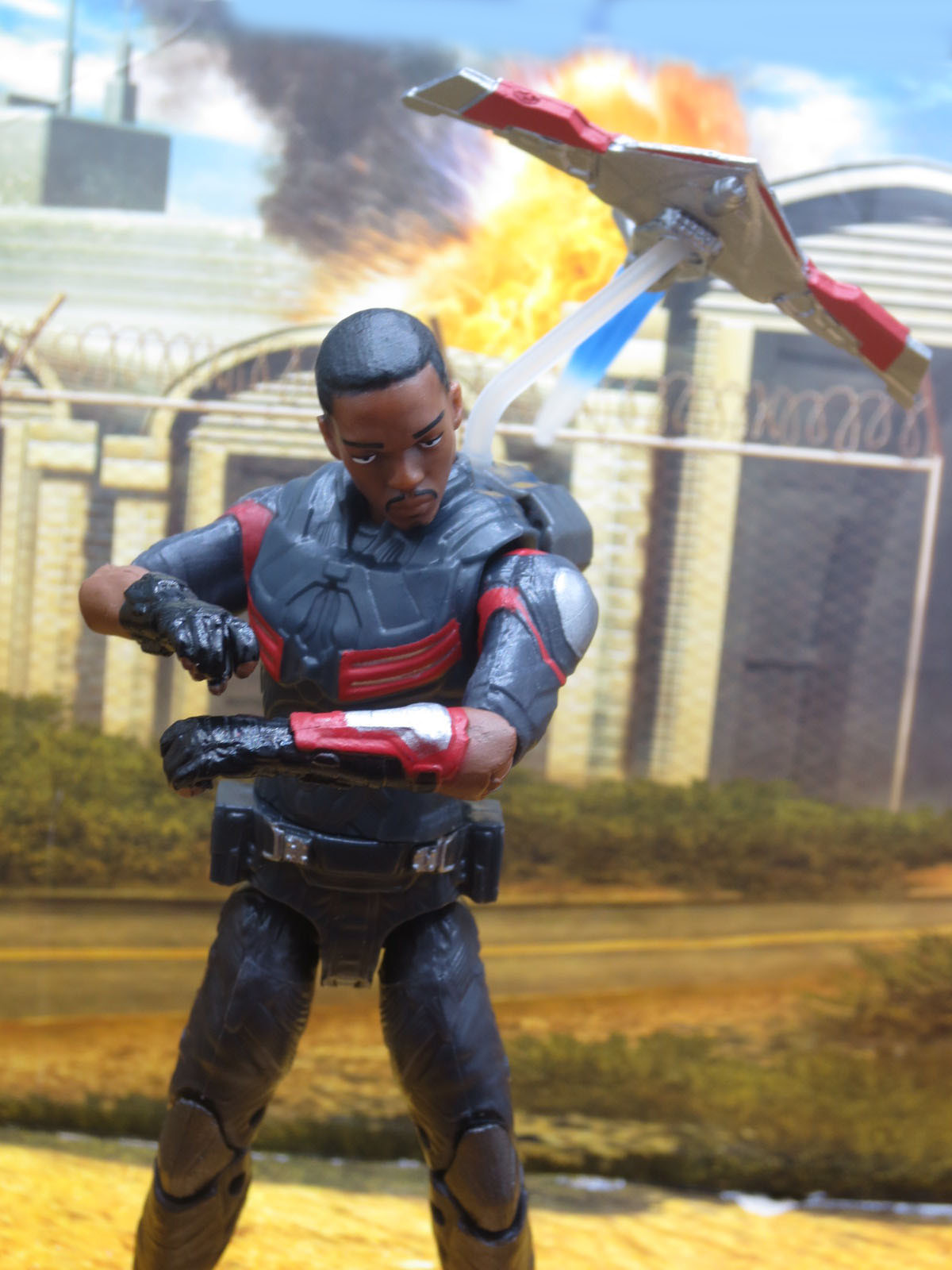 Where Falcon really shines, though, is with his accessories.  This guy is LOADED with extras, and each one is a winner.  Falcon’s wings are in perfect scale with the figure, which leaves them at a whopping 6″ wingspan, and they look great posed either fully raised or lowered.  And in case you want your Falcon to be flightless in your display, the wings and backpack are removable, and can be swapped out with an alternate pack with fully stowed wings.

Both backpacks include a small hole in the top, which fits a clear flight stand that connects to the Redwing drone, also packed with this figure.  The drone is awesome, matching the colors and aesthetic of Falcon’s costume, and the ball peg on the flight stand allows it to be posed all around our hero.  And just to ensure we get the coolest look possible, Hasbro has even included a removable translucent/ blue jet stream which attached to the back of the drone.

Rounding out Falcon’s accessories is an alternate head, without his goggles.  Both heads feature an excellent portrait of Anthony Mackie, and they can be swapped with ease on the familiar ball peg of the torso.  Oddly enough, despite this copious amount of accessories, Falcon does NOT include his twin pistols… although thankfully this guy is in scale with the GI Joe collection, which has released literally ten thousand guns exactly like the ones Falcon uses.

I’m incredibly impressed by this Falcon figure.  He looks great, sporting one of the best and most film accurate sculpts Hasbro’s Marvel team has released in this scale, and his accessories are not only tons of fun, but more than justify this guy’s deluxe status and slightly higher price tag.  There’s a bunch of people on the internet who keep griping about Hasbro’s 3.75″ Marvel toys (complaining on the internet? SHOCKING, I know), but figures like the deluxe Falcon prove that Hasbro is clearly still invested in this scale, and in delivering the best value and quality possible with their action figures.  Look for Falcon at Entertainment Earth. 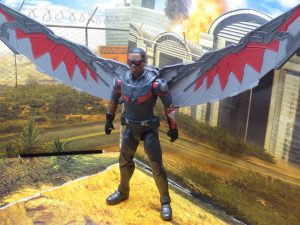 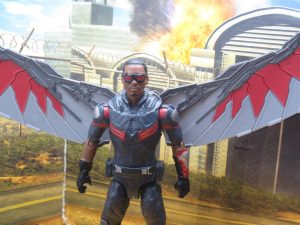 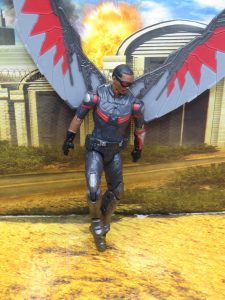 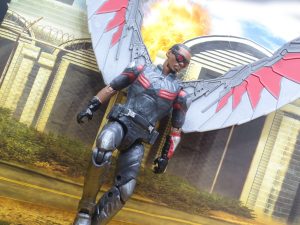 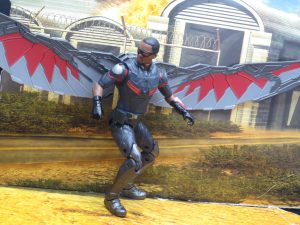 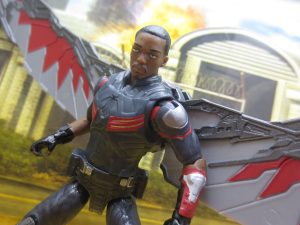 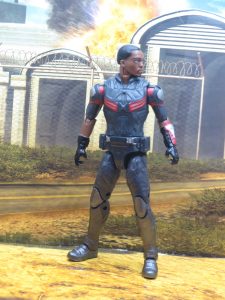 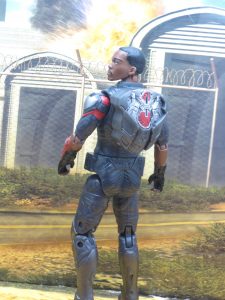 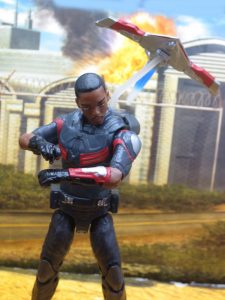 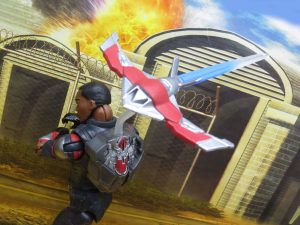 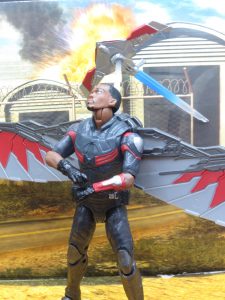 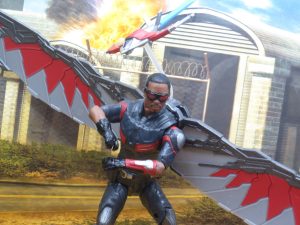 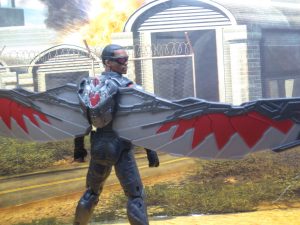 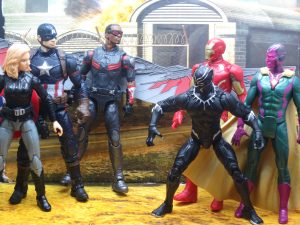 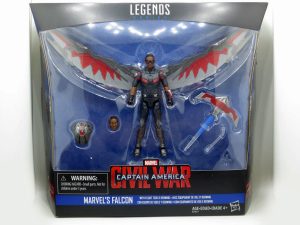 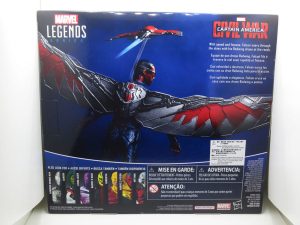