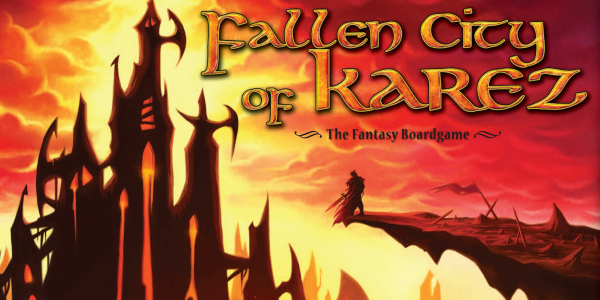 After a rather successful kickstarter campaign, Fallen City of Karez from Golden Egg Games has become available to the public.  Combining worker placement mechanics with a bit of dungeon adventuring and combat, Fallen City is a semi-cooperative game in which each player assumes the role of a guild vying to restore Karez to its former glory.

The game sounds exciting enough and the board features some stunningly beautiful and detailed artwork, however the experience of actually playing through Fallen City was hampered by fiddly rules (exacerbated by one of the worst rule books in recent memory) and an unintuitive, weak combat system.  Up to five players work together to make the city prosperous while trying to gain victory points in the process.  These points can be earned through completing adventures and accruing valor, purchasing buildings, and a number of other ways.  The player with the most points at the end is the winner but, if Karez hasn’t reached “city” status by the end of the eighth round, everyone loses.

The town is able to grow as the guilds’ heroes complete adventures, ridding the surrounding area of monster-filled dungeons and thus attracting more people to settle there.  Let threats pile up, though, and players will find less citizens in Karez with fewer open buildings – this effectively cripples the players’ ability to perform the key actions that will lead them to victory.  This is because the citizens of the city itself are shared by all players and function as the resource you would exchange to carry out the tasks that you place your Guild’s shield on.  Technically, rounds can keep going until all players have placed all their shields, but typically the turns are dictated by the more limited citizen pool.  It can be difficult to discern what each action space does due to the busy nature of the board, but the areas are dedicated to awarding players with items like gold, allowing weapons and armor to be furnished and purchased, and even healing wounded adventurers.  Guild shields may also be placed on open dungeons, signifying that your heroes will venture into it at the end of the turn. 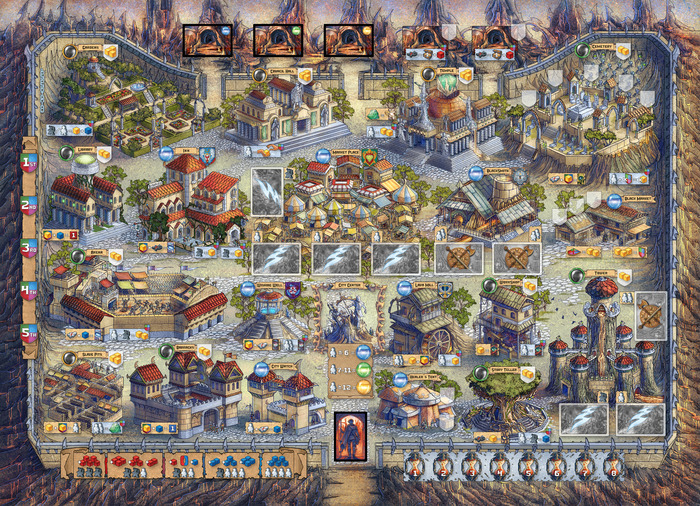 The dungeon depicted on the card will dictate how many heroes can enter and how many dangers they will face.  In turn, each hero card will advise how many pieces of equipment they are able to carry into battle.  Both heroes and monsters each have a specific number of dice they are able to roll during combat and are noted with the specific roll results that will damage them. For example, if a player’s wizard shows a die result of a 3, 4, and 6 at the bottom of their card, and the monster being fought rolls two d6’s with results of a 2 and 4, the “4” symbol on the Wizard would be covered to show he has taken one unit of damage.  If the monster is then able to get a 3 & 6 result on subsequent rolls before being defeated, he will kill the Wizard.  This sounds simple enough but, in practice, the system needs a lot of refinement.  It can be tedious to keep up with the constant fluctuation of how many dice are getting rolled for each character and the rounds of rolling can go on for a long time as only specific results will cause damage.  Besting all the monsters in the area completes the adventure and nets your Guild a specific amount of valor as well as some treasure.  Losing the adventure kills your heroes, destroys the equipment they carried, and adds additional markers to Karez.  Once all the adventures are completed, the balance of threat against valor is determined and new citizens/workers are added (or subtracted) accordingly, with each Guild’s individual valor amount determining the turn order for the next round. 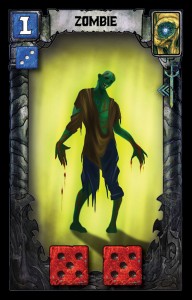 As far as the components go, there is a ton of stuff packed in the box – most of it aesthetically pleasing but of varying quality.  The game board, while a bit too busy for its own good (pieces can easily vanish in the complex artwork), looks exquisite.  The card art on the other hand, has great-looking art adorning the back, which was illustrated by the same artist who did the board work, but then rather ugly, simplistic character designs on the face side which don’t really fit the overall design.  There is also one symbol (denoting that the character on the card always attacks last) that blends into the card’s background to the point that it’s almost invisible.  The cards themselves are rather flimsy and every one of the cardboard components in the box we demoed was strangely sunken in towards the center, as if they had all gotten waterlogged during production or something.  The wooden cubes and plastic gems are about what you’d expect but where the game totally fails is the ever-important rule book.  Since this is the players’ singular guide to understanding and enjoying the game, it boggles my mind how the designer could have made such a huge misstep in this department.  I can see no way that a new player could read the rule book and be ready to play.  Important rules are often hidden or ignored altogether, leaving it up to the player to watch the designer’s online videos (which clear up a couple issues) or take to forums where I’m assuming nearly everyone who has tried the game will no doubt end up with questions.  Poorly edited, and assembled in a fashion that makes little sense, it’s simply a disaster of a rule set. 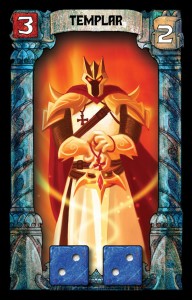 It may have been the constant questions that originated because of the poor rules explanation or the time wasted trying in vain to find specific items in the rule book, but the game time of 120 minutes listed on the box wasn’t close to accurate for our playthrough.  Even without the downtime, I can’t see this game being completed in under three hours.  Adding onto the frustration is the asymmetrical guild design.  I actually love asymmetrical factions when employed well (Eclipse and Terra Mystica for example), but here you have five that play largely the same and then the Arcane Guild which is wildly different.  So much so that explaining just this one group basically requires its own set of rules, and these sometimes don’t work coherently with the way the game plays.  For new players, ending up with the Arcane Guild is a guaranteed poor experience.

The biggest misstep of all go back to my point about actions being somewhat limited by the amount of assignable citizens in the town.  The reason that great worker placement titles like Agricola and Le Havre are so popular is that, even though there is a lot of strategy involved in which actions you should take at any given point, there is always something meaningful for you to do.  It seems like here, for often than not, players are left scanning the board, desperately searching for an action they are able to take – either because players that already took their turns used up the workers, they lack the resources to take any actions, or they simply can’t discern what is available on the overly busy board.  In short, going first here is extremely important but, unlike the aforementioned games, there is no space you can claim that will guarantee you go first next round.  This means that people that start last in the turn order have a much more difficult time ever getting their goals accomplished or gaining the valor needed to work up the turn order.

It’s a shame that The Fallen City of Karez made so many design missteps.  The game does have a lot of flavor and, with many tweaks, could be very enjoyable.  As it stands though, this is one to avoid – I simply can’t see it ever hitting the table with our group again.