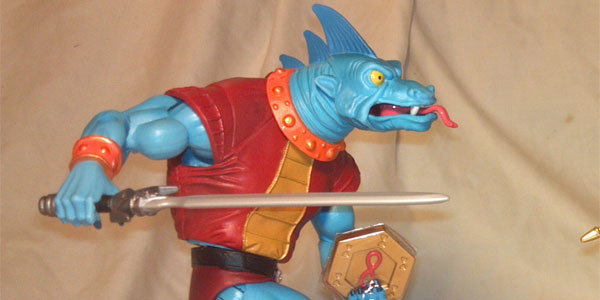 A staple of the classic animated series, Fang man has finally been captured in plastic as one of the March releases for Masters of the Universe.  While considered part of the general line, he offers promise for the upcoming Club Filmation collection… although he, himself inadvertently became an exclusive.

Fang Man is the first ever monthly subscription figure not for “day of” sale, and he is the first exclusive Filmation character since Shadow Weaver. With his force field rod, unique sword, and Wheel of Time artifact, he is ready for Eternian mayhem. He is pretty much another Beast Man, and the expected disinterest in Filmation characters and their plainer designs may have alarmed Matty into fewer numbers produced, but he is a fun figure with a decent array of accessories. He stands out for sure, and even though the design was streamlined like the source material, the Four Horsemen did an amazing job adding texture to an otherwise boring aesthetic.

His costume has beautiful metallic red and golds and orange trim on his light vestments, all draping over his bright blue scales. The tunic and trunks are made of a very malleable material that doesn’t inhibit his shoulder and hip articulation in the least. His eyes have small black pupils that thankfully didn’t suffer the cross-eyed mess that Spikor had. This gives me hope for Mantenna! Even his tongue is articulated: a first for the line!

His accessories are his biggest strengths. Thankfully, nothing was reused, as this line is notorious for.  Respecting the character, he comes with his animal-controlling force field rod from the original model sheet as well as a sword with a dragon design that matches his belt. I am getting a bit wary of long swords that make the power sword look weak, but it’s a simple yet gorgeous blade they gave him. Lastly, we are introduced to the Wheel of Time, the first of (I hope) many exclusives to come. If an trophy case of sorts can be released with the castle to store this objects, that would be really cool. 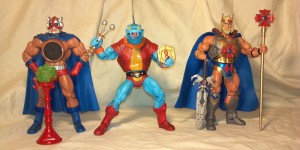 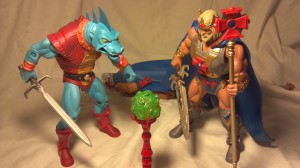 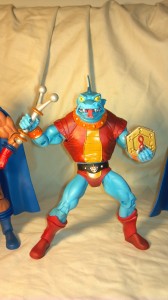 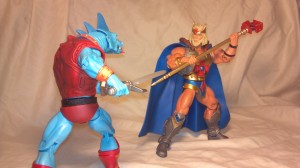 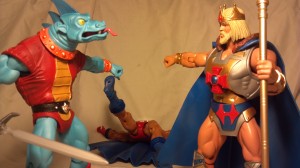 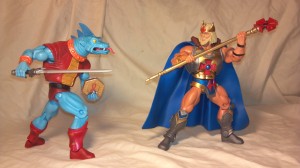