Far Cry 3 is the Year’s Most Beautiful Disappointment 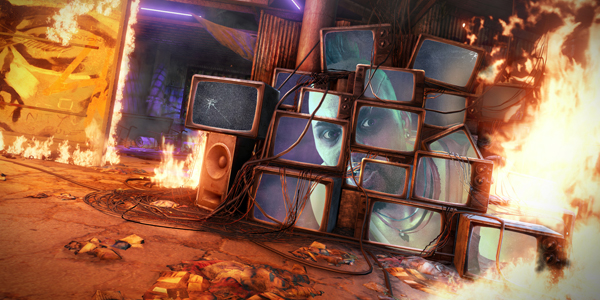 Far Cry 3 was released as the last big-budget title of this year’s holiday season.  With the promise of open-world gaming, a gripping narrative, and a return to the tropical locales of the original, I had high hopes for it.  How unfortunate that Far Cry 3 concludes 2012, not with a bang, but with the resounding drone of second-rate dubstep and frat-boy babble.

It’s a little disconcerting to see the direction the Far Cry franchise took after its phenomenal debut.  Developed by Crytek, who later went on to create the eye-candy that is Crysis, the first entry in the series ranks amongst the greatest first-person shooters of all time.  With its lush jungle setting, compelling storyline involving the horrors of genetic experimentation and bio-weaponry, and a badass protagonist, army vet Jack Carver, Far Cry had the perfect formula for a great action game. Inexplicably, Far Cry 2, the Ubisoft Montreal-developed sequel released some four years after the original, was utterly terrible and a huge step backwards for the series, introducing mind-bogglingly tedious mechanics that destroyed what could have been an enjoyable experience.  Now, the third iteration has been released and marks yet another decidedly different take on the series. 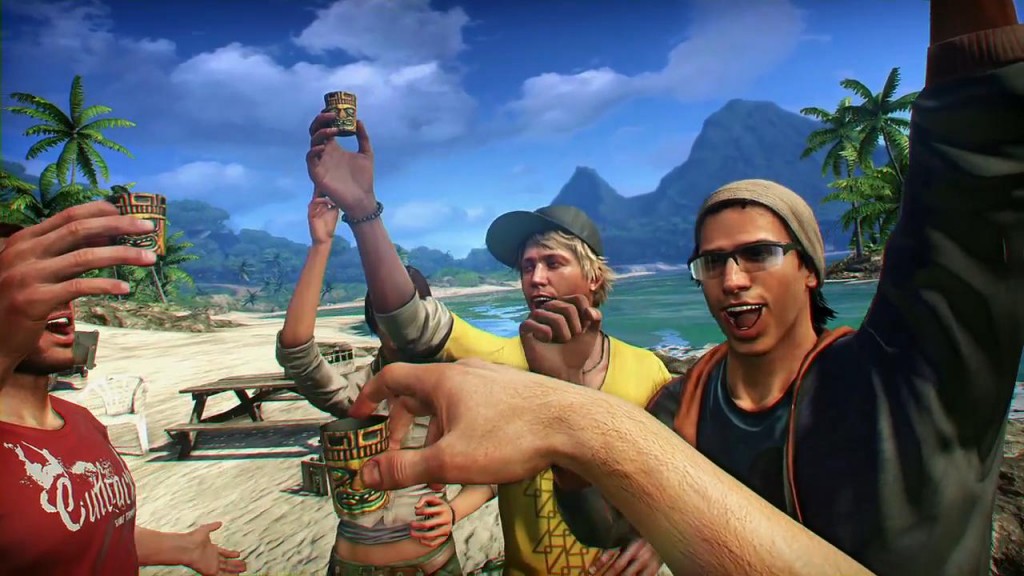 Interestingly enough, Ubisoft made the conscious decision to bombard players, in the first minutes of the game, with some of the most heinously unlikeable characters this side of the Jersey Shore as they enjoy a thrill-seeking spring break vacation, presented via a found footage montage set to M.I.A.’s “Paper Planes.”  Before you can reach for the mute button though, you find that you and your detestable friends have landed on a remote island during a skydiving expedition and were imprisoned by the pirates that inhabit the area.  After a brief introduction to pirate leader Vaas, you learn that your name is Jason Brody and that the pirates intend to sell you into slavery.  You and your cellmate, Jason’s older brother, stage a daring escape from the pirate camp as soon as the coast is clear in the tutorial intro to your adventure.  Here you learn how to sneak in and out of cover and lob rocks to create distracting sounds.  It doesn’t take long before you’re found out, however, and Jason is left, quite literally, up a creek and on the verge of death before being rescued by an island native named Dennis. 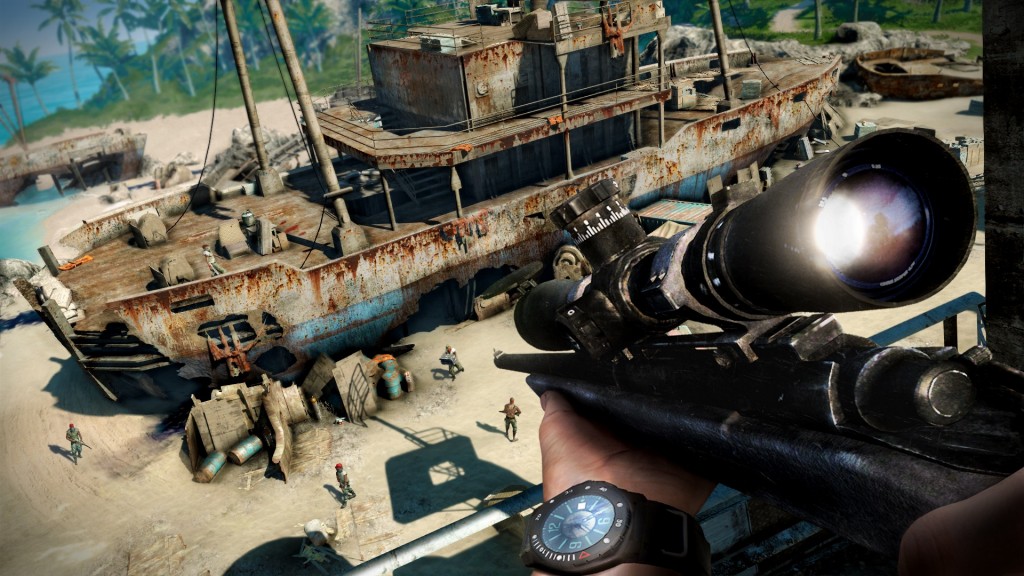 You find that Dennis and his native tribe, the Rakyat, have been oppressed by the same pirates who captured your group. As you share a common enemy, Jason becomes the Rakyat’s errand boy in exchange for their help in recovering your friends.  Your first task is to climb and activate a nearby radio tower.  These towers are scattered all over the island and will unlock free weapons at shops and uncover more of the viewable map as they are turned on.  At this point though, the island is almost completely open for you to explore, and that’s exactly where Far Cry 3 comes close to succeeding.  As you explore the environment, it seems like there are activities and missions at every turn, with dangerous animals everywhere you venture.  The world itself is overwhelmingly alive and has an organic quality that, in and of itself, makes it the most important character of the game. 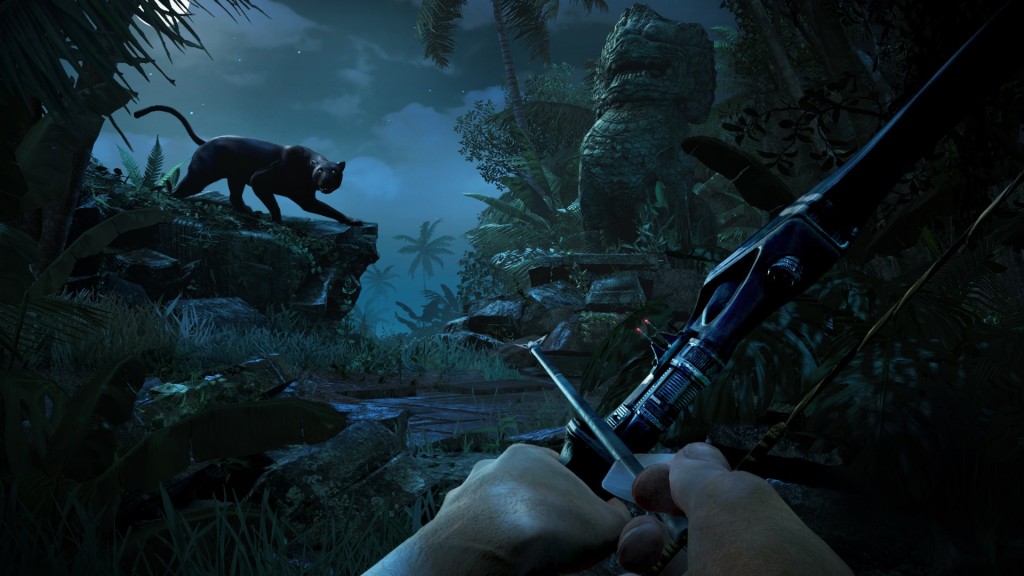 With no shortage of collection quests (all consumable items and inventory upgrades must be constructed by skinning certain animals or obtaining specific plant leaves) and competitive challenges, completionists will have a field day trying to see and do everything the game has to offer.  The problem is that none of these diversions from the main storyline offer any robustness.  Liberating pirate camps and completing time trials is fun for a while, but if you go into FC3 expecting to find a Skyrim-esque eternal spring of long-winded, interesting quests, you’ll be horribly disappointed.  Open world games, like Skyrim, also benefit greatly from the ability to save anytime, anywhere.  In Far Cry 3, mid-mission saves are entirely checkpoint-based, which inevitably leads to frustration upon dying or botching a stealth run and being required to start back at the last autosave point.

Regardless, optional tasks are a great, but finite and unvaried, distraction and represent some of the most entertaining points of the game.  The main story, however, is sloppy at best.  Right from the get-go, the faux-hawked, frat-boy-out-for-vengeance (who had admittedly never fired a gun in his life), Jason Brody, apparently channels Jason Borne to become a mass-murdering, skilled warrior in the blink of an eye.  The only thing that doesn’t change is the inane dialogue that escapes his mouth now and again.  During one sequence when Jason receives intel that one of his friends was sold to an island-dweller named Buck, he casually remarks to himself, “His name is Buck, and he likes to f*** —  clearly a misquote of the classic line in Tarantino’s Kill Bill Pt. 1, which was itself borrowed from Tobe Hooper’s Eaten Alive, “My name’s Buck, and I’m here to f***.”  My issue isn’t so much that they botched the line, but that they felt the need to insert  it in the first place.  Nearly every time Jason or one of his friends engage in any kind of conversation, you can be sure to hear some pretty bro-tastic drivel that seems completely out of place, which makes it increasingly hard to accept that he is anything but a mentally-disabled child, let alone a ranking member of a native warrior tribe.  Literally one moment you’re out trying to gather info on where your friends may be imprisoned, the next you return to the Rakyat village to find that you are the “chosen one” prophesied to lead their tribe to freedom, which apparently nets you some sweet perks, such as having gratuitous sex with their high priestess, Citra. 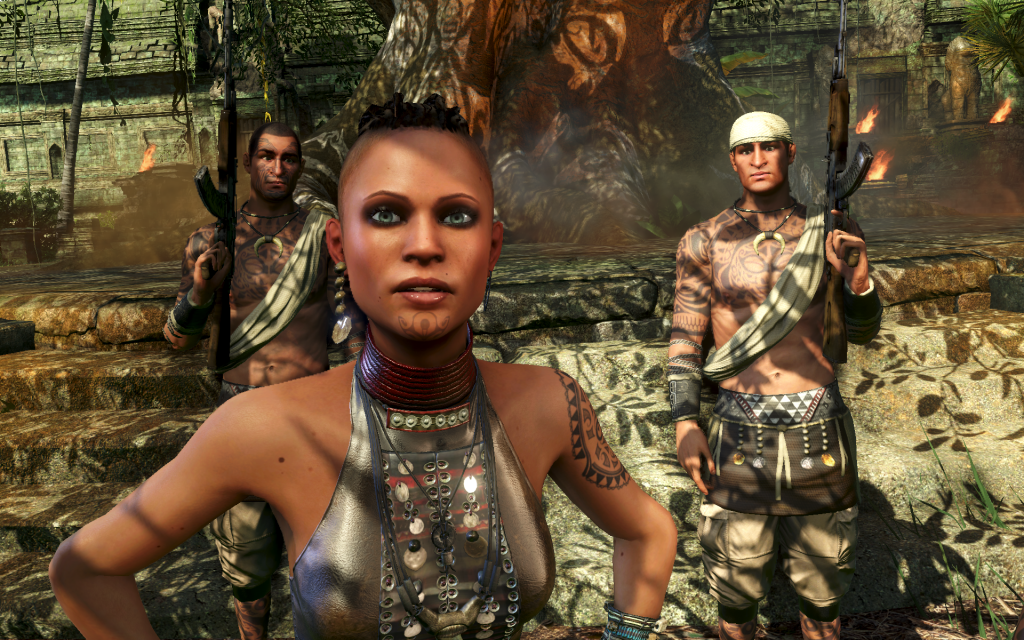 Instead of trying to weave a logical or believable narrative that could chronicle Jason’s decent into madness (something a more skilled writer did to great effect in the recent Spec Ops: The Line), the creative team behind Far Cry 3 opted to force players through numerous drug-induced, hallucinatory experiences of self-discovery.  Instead of providing any psychological insight, however, the ridiculous parallels they attempt to draw between Jason and his enemies in these scenes come across half-hearted and largely nonsensical.  Stranger still, the three boss battles in the game also seem to take place in a dream-like, otherworldly setting for no apparent reason.  It’s jarring and unnecessary to be seconds from facing off with Bad Guy-A in the depths of his horrifying rape-dungeon just to suddenly be transported to what looks like the set of Saturday Night Fever to take part in a QTE knife-fight. 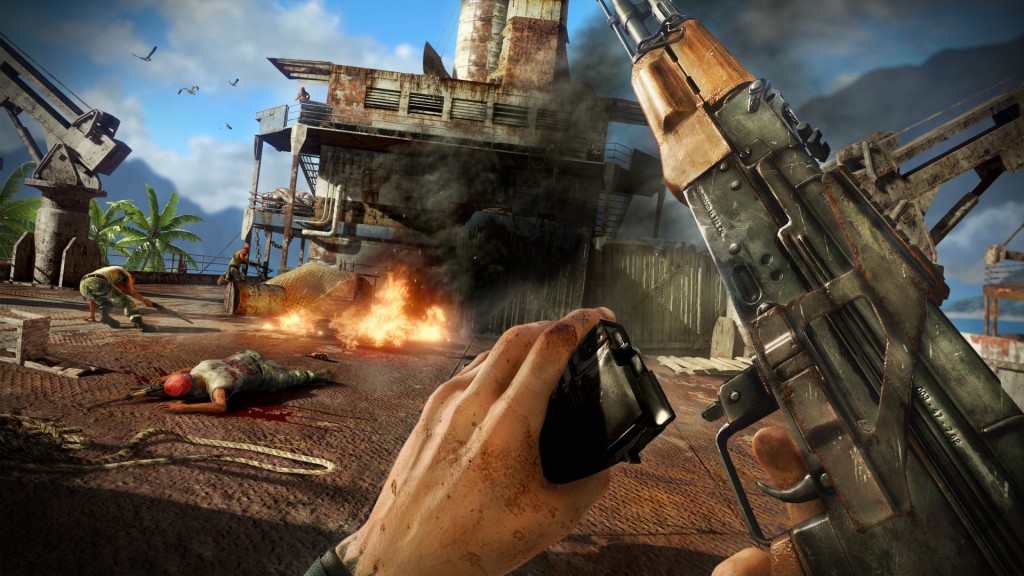 It seems a shame that these bosses end up meeting their end after having only brief encounters with them as they are easily the counterweight to Jason Brody’s atrocious voice-acting.  The psychotic Vaas in particular steals any scene that he appears in with solid voice work that changes from maniacal to eloquent like a switch being flipped back and forth.  Ultimately, their great performances were wasted here as the characters they portrayed were never given the chance to become anything more than one-dimensional placeholders.

The RPG elements are also a bit of a misstep that play directly into Jason’s lack of transition into a Rambo-like character.  There is a pretty impressive skill tree that can be upgraded more and more as you gain experience and level up, gaining the ability to slide after sprinting or reload more quickly for example.  The problem is that, by end of the game when I had virtually every skill unlocked, I felt no more powerful or dangerous than I did at the beginning.  The entire upgrade system ends up being far too shallow and incremental to make any significant changes to the way the game plays, which is rather unrewarding to players who saw the game through.  And it’s worth mentioning that completing the game is made more of a chore thanks to a wealth of bugs and glitches that often prevent you from accepting missions and progressing until you perform a full restart.  On numerous occasions, the person I needed to speak to in order to accept a quest was glitched into the environment or floating in the air, preventing me from speaking to them. 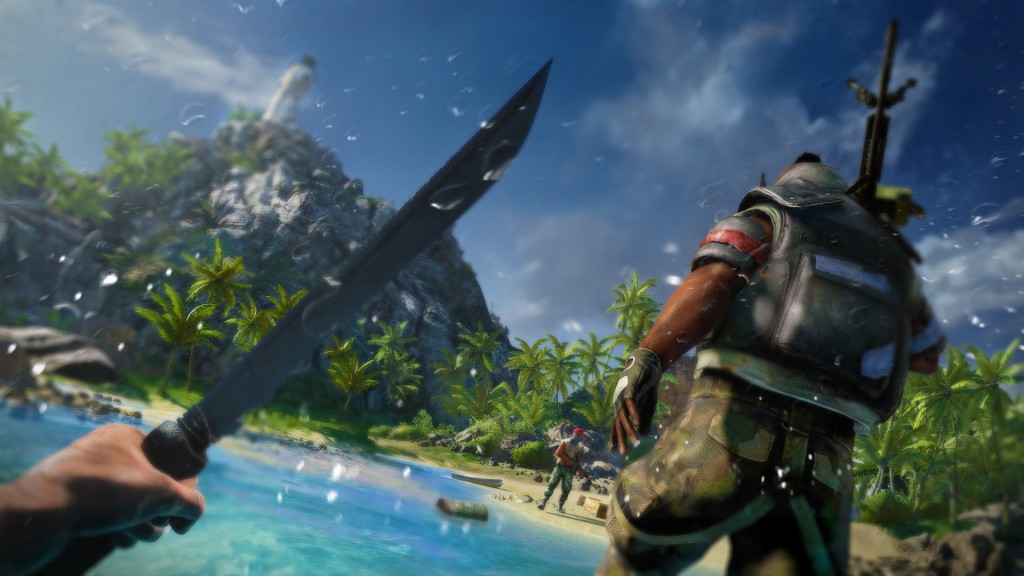 On the plus side, the visuals are thoroughly impressive, even on consoles, with PC’s benefitting from a much greater draw distance.  Fire effects look especially nice and will spread through plants and brush in a natural fashion, casting a beautiful amber glow on nearby objects.  Used strictly as a tech demo to show off what a fully-loaded PC rig is capable of or even to show off the visuals that the aging Xbox 360 and PS3 are still able to produce, you could do much worse than Far Cry 3.  Most of the audio is equally amazing with excellent gun sounds and the ambience of the island itself (animals in the distance, crashing waves, etc) always present and used to wonderful effect.  Of course, completely tarnishing this is one of the worst soundtracks in recent memory.  As a rule of thumb, the quickest way to ruin a game/film/television program is to insert Skrillex into it.  Possibly the most unjustifiably over-appreciated force in modern electronic music, you’ll frequently hear his signature brand of faux dubstep drop in and make you want to set fire to your console and home audio system.  Thankfully, merciful devs included an option to turn off all music in the menu – probably just for this reason. 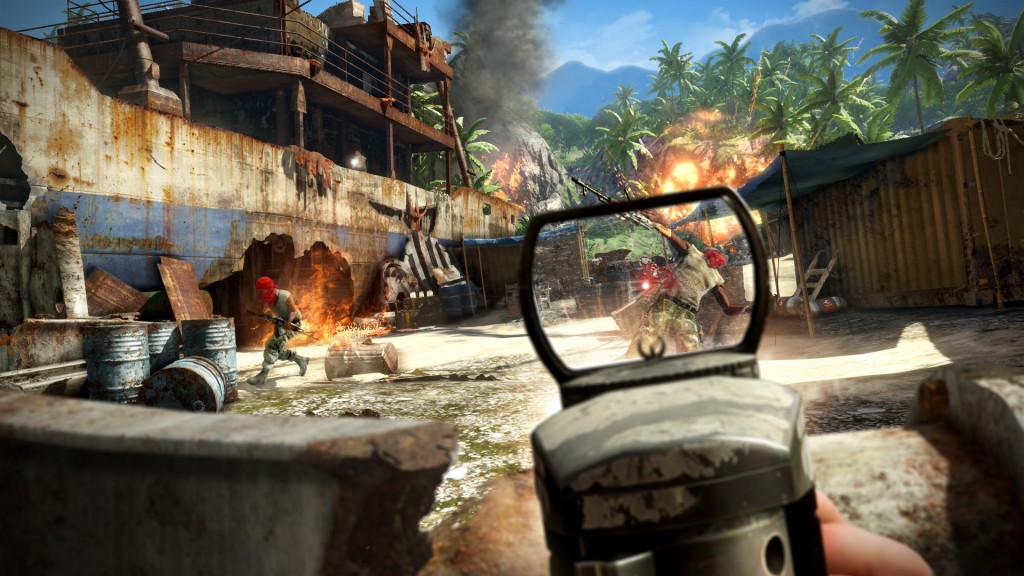 Oddly enough, all things considered, I would still argue that the game as a whole is a worthwhile experience despite its overwhelming shortcomings.  It’s as if there is an amazing first-person shooter hidden within all the nonsense that is trying to surface but is ultimately held just out of reach.  You’ll have a blast hunting animals for supplies, taking down dozens of enemy encampments, and participating in all the challenges and assassination contracts the island offers.  The main story itself, which should be the focal point of the game, is sadly a complete mess with a forgettable storyline that insults the audiences intelligence at every turn.  A disappointment for sure, but at least it’s a great looking one.