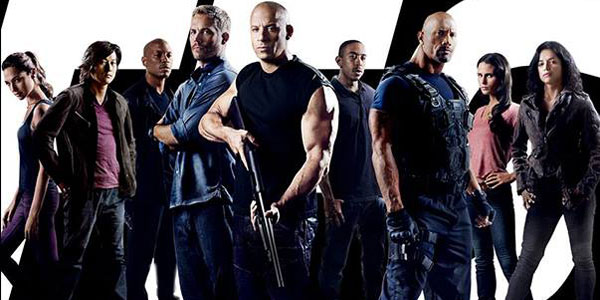 With the crew back behind the wheel, and a new mission that offers both high stakes and high drama, Fast and Furious 6 is the closest thing we’ll ever see to a live action M.A.S.K. movie.

If anyone had said ten years ago that The Fast and The Furious would become one of the most consistent and entertaining action movie franchises of the modern day, I’d call them crazy.  But Fast and Furious 6 proves yet again there’s still some mileage in this world of cool cars, fast talking and tough guys.

One of the things that has kept the series fresh is the willingness to reinvent, to continuously tweak and adjust exactly what kind of movies these are, not unlike the under-the-hood tinkering that motivates our gearhead heroes and their vehicles.  If 2011’s truly excellent Fast Five was this franchise’s take on an Ocean’s Eleven-style heist, then 6 is without a doubt their Bond film.  From the high stakes of the villainous Shaw’s master plans, to the wild and inventive gadgets employed by both sides in this ongoing cat and mouse game, to the bravado and confidence of each one of our heroes. Whether they’re breaking into an L.A. prison, running down a henchman through the London subway or anchoring a getaway plane to the tarmac, each of our returning heroes from Ludacris’ Tej, to Tyrese’s Roman, to Dwayne Johnson’s Hobbs have their own chance to shine.

The center of the story, though, is the mysterious return of Letty, the love of Dom’s life though dead after the events of the fourth movie.  Not only is Letty alive, she’s working for Shaw, the war profiteer/ terrorist who’s been collecting parts to build a Weapon of Mass Destruction and hold the entire world for ransom.  So we essentially get a two-layered story, with high stakes action in trying to stop Shaw’s evil Bond villain scheme, and the more personal side as Dom and his crew all react to Letty’s reappearance, and do what they can to bring her back into their “family.”

It’s the personal angle that gives the film much of its charm– we get plenty of interplay between the cast of characters, and half the fun comes from watching these guys bounce off one another.  Many of these players entered the series in different films, gradually coming together as a team like a nitrous-fueled version of The Avengers.  Yet, despite the late-in-the-game union of these distinct characters into one crew (or perhaps because of it?) there is a simple wonder in watching their mutual chemistry on screen.  The best ensemble casts can play with one another any way they are put together, and that sense of modular chemistry between this team is wonderful.  Just when I thought there could be no pairing more entertaining than vain Roman and practical Tej, Roman and Han share a fantastic action sequence as they chase one of Shaw’s goons through the subway that plays as hilarious as it is action-packed.

Luke Evans even brings a certain humanity to the villain Shaw.  While his plot feels fairly generic and half-boiled, Shaw has an interesting scene in which he shows genuine compassion for Letty, proving that there may be more to him than a mustache to be twirled.  With his sinister plot in place and seemingly endless supply of truly fierce resources (the flip cars he employs are killer!), Shaw absolutely feels like a true match for Dom, and his team serves as dark mirrors to Dom’s crew.  With his proclivity for gadgets and henchmen, it would seem like Shaw is a Bond villain, but his suave demeanor and steely determination make him feel more like Bond himself, gone bad.

With a cast this size, it can be a challenge to keep all the plates spinning in the air, but returning director Justin Lin proves more than capable of the challenge.  While the Dom-Letty relationship anchors the film, each character is given a satisfying arc and lots to do… often in different directions.  As the mystery of Letty’s survival and her employment with Shaw are discovered, Brian digs up his own past by infiltrating a prison to shake down an informant. Hobbs, in the meantime, follows clues to stay on the trail of Shaw and his gang, as they attempt to steal the last piece they need to assemble a weapon of mass destruction.

At the center of it all, though, is the reunion of Dom and Letty. Diesel has a lot more personal drama to play with in this role, as Toretto investigates what exactly happened to his presumed-dead lover, and attempts to swoon her away from Shaw and back into his crew.  The undeniable chemistry between Diesel and Rodriguez is as palpable as ever, as they share some great scenes that work toward bringing Letty back home to her rightful family.  For Toretto, it’s more than rekindling their romance– the one thing Dom cares about more than anything is family, and as he does whatever it takes to make his family whole again by bringing Letty home, the global stakes at play with Shaw’s WMD feel very much rivaled by Dom’s personal agenda.

But don’t think this is some deep character study– the high velocity mayhem that made this series famous shares the spotlight with these thoroughly entertaining performances, and director Lin once again becomes the movie’s MVP as he moves the story forward at a fast, confident pace and consistently thrills with the action scenes while cleverly connecting dots within the overall film series that are genuinely surprising.  There is a sense of escalation to this movie, as the action gets bigger and bigger, and much of it is once again realized in some spectacular practical stunt sequences, with a welcome shortage of CGI “enhancements.”  Keeping things practical adds a sense of visceral energy to the best early set pieces, and by the midpoint of the two-part finale, the character work and action converge into a real show stopper.

The first part of the finale feels like an extension of the physics-defying closer from Fast Five, replacing the giant safe with a tank that Shaw and his henchmen tear across a bridge, literally crushing anything in their path.  As Dom and the others figure out how to stop their foe, we get plenty of bombastic moments, which as thrilling as they might be, also always come back to the characters.  The sequence closes with what may be the most absurd moment of the entire series, but by the time it happens I was so invested in what was going on, I stood up and cheered.

The second half of the final action scene is even more thrilling, combining another intense chase (as the crew attempts to anchor Shaw’s getaway plane), as well as some well-choreographed fight scenes on the plane itself.  It’s an insurmountable amount of action going on at once, but Lin handles it like a pro, creating a smooth sequence that is as easy to follow as it is exciting.  The payoff includes a few twists which, while not necessarily shocking, carry a weight thanks to the investment we have in these people.

It’s rare for a franchise to even reach a number six, but that a series like Fast and Furious can not only hit that mark, but hit their stride and make the sixth outing one of the finest yet is a testament to just how unique and interesting this franchise has become.  It’s absolutely popcorn entertainment, but it’s so well done it feels like something special.  The action is well paced, visually striking and thoroughly entertaining.  There’s an impressive amount of continuity and world-building, tying in seemingly separate characters and plot threads into one greater story.  And at the center of it all, there’s still a lot of heart in these characters.  It’s that heart that makes Dom and his crew so entertaining to watch, what makes us care about their increasingly high-stakes struggles… and what will keep me coming back to this franchise time and time again.