Has The Fate of Batman Beyond Been Answered? 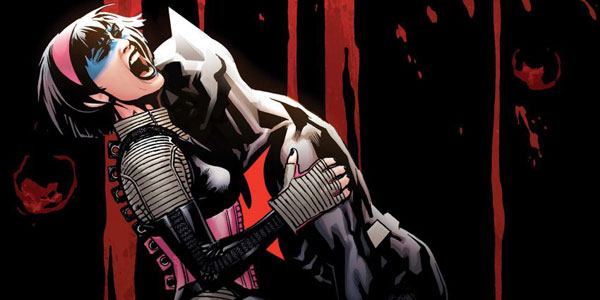 It seems like I am the obituary writer for all things comics lately. With that being said let’s talk about what has transpired from DC Comics’ weekly title Futures End.

This post will contain spoilers from issue 46 of Futures End. If you have NOT read it or you are waiting for the TPB,  I would turn back now. Unless you keep up with comic book solicitations, then this will have already been spoiled for you.

In this issue we see Batman, Mr. Terrific, and The Atom all trying to shut down Brother Eye. This is proving to be a moot point now that Brother Eye is taking control. Meanwhile Terry McGuinness (aka Batman Beyond) is arguing with his virtual Alfred AI about his next move– one he has been trying to avoid since he traveled back in time- confront this timeline’s Batman with the truth. While this battle is going on, Tim Drake, Plastique and her crew are trying to hold back the waves of Brother Eye’s zombified people. This becomes too much as the hybrid Batman/Joker cyborg from the future puts a damper on things.

Terry is shown confronting Bruce about his mission and when he hears of the attack on Tim and Plastique he leaves to help them fight the cyborg. The battle is pretty epic as the Joker side of the robot, decked out with a gattling gun, and has overpowered the Batman side. As Terry and the cyborg link up in battle, Joker fires a few shots at Terry and says, “Batman Begone!” Which I found pretty clever and funny. I will leave out the specifics on the battle but we see Terry fly in to the room hurt from battle. He explains why he did what he did to Tim… as for Tim, he did not exist in Terry’s future and he asks him to now be a part of it. Plastique holds him and he decloaks the Batman suit to speak to her, wanting to look upon her as the last thing he sees. Just as he says that we see a beaten and shot up Terry slumped over in Plastiques arms and Tim’s head looking down with grief.

A few months ago I reported my very non-confirmation of DC canceling Batman Beyond Unlimited/Universe. Turns out this was why. Rumor has it that Tim Drake will assume the mantel as Batman Beyond when the comic restarts after Convergance, which leads us to a MUCH bigger discussion. For quite sometime Batman Beyond was NOT considered cannon, then it was, and now the question comes back? With Tim Drake possibly taking the mantel of the Batman does that mean all the stuff from Return of the Joker became debunked or did DC just basically use the Flashpoint formula with a dash of Convergance on this title?

I enjoyed Futures End and there are still a few issues left to read before the story wraps up. But this story did have a few casualties… RIP Terry McGuiness.