The Federation Descends Into Darkness

Along with the Man of Steel poster, the first Star Trek: Into Darkness one sheet was also revealed recently. The poster is simple but raises a lot of questions. 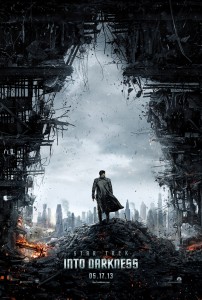 Who is the mysterious man in the center of the poster? It does not appear to be Spock or Kirk, so it might be the rumored villain, Khan. Abrams and staff have been tight lipped about any details so until a full trailer is shown its anyone’s guess as to the identity of the man in the poster.

References to London in the poster could indicate this movie will take place not in space but rather at home on Earth?

There is also a very broken and messy Star Fleet insignia that borders the poster. Could the title and this symbol hint that the entire federation will be descending into darkness or will be it be a journey just for the crew of the Enterprise?

Abrams and crew did a great job teasing the fans with this poster, bringing up more questions than answers.  Hopefully more will be revealed when the film’s first 9 minutes debut in IMAX before screenings of The Hobbit.