Limited-edition figures from Series 1/Courage include: 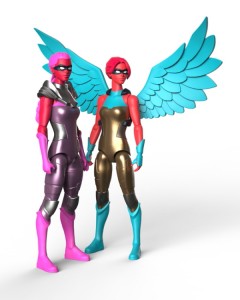 IAmElemental, which was launched to worldwide acclaim via Kickstarter, envisions kids as the creators of a play experience in which they are the active agents in a story of their own design. The company’s female action figures boast a forward-thinking design and engineering unique among products designed for children; they are “fierce, strong females worthy of an active, save-the-world storyline that fosters creativity among girls – and boys!” according to Kerwin.

“The IAmElemental New York Comic Con experience includes several groups that mean so much to us: we’re partnering with UN Women to support gender equality through their HeForShe campaign, supporting the fight against breast cancer with our Pink Bravery figure, motivating the next generation of storytellers with our kids’ comic workshop, and thanking our amazing collector community with our Gold Honesty figure. We look forward to seeing everyone at Booth 1760,” said Kerwin.

IAmElemental is a privately held, New York City-based company, founded in 2013. The company conducted a Kickstarter campaign in 2014 which was fully funded in two days, drawing backers from all 50 states and six continents. The company was named by TIME Magazine as one of the “25 Best Inventions of 2014” and “Top 10 Toys of 2014.”