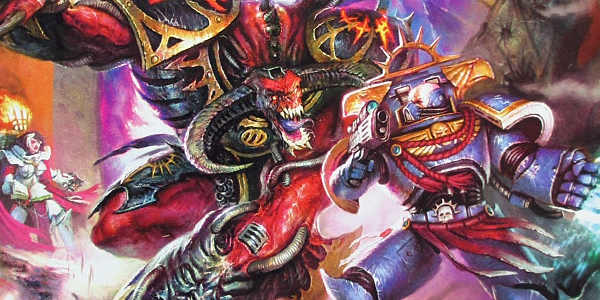 Fantasy Flight continues to dominate the themed board games market by applying the mechanics of Games Workshop’s epic adventure title, Talisman, to a new title set in the Warhammer 40,000 universe.  The result is a lengthy, brutal experience that can be as fun as it is frustrating.

That may sound like a mixed assessment but make no mistake, I love everything about Relic. Making great use of the Warhammer 40K license, this grim sci-fi game is set in the 41st millennium where humanity is at constant war with a number of horrible entities.  As one of ten heroes of the Imperium, you and up to three other players will explore the Antian Sector, encountering a various locations, discovering powerful artifacts, and battling countless horrible creatures.  You begin the quest on the outermost rung of a three-tiered board and, similar to Talisman, will begin to work your way inward as you grow more powerful (as you are subjected to more extreme challenges in the innermost sectors).  While this is a Talisman re-theme, however, there are plenty of updated mechanics that do set it apart.

The first thing you’re likely to notice is the beautiful artwork and new, high-quality components.  Each character will still have a familiar card that details their special abilities and starting attributes, but in Relic these are then partially housed in a thick cardboard bracket with a series of dials.  Instead of the old-school system of counting attribute gains via colored cones, players are now able to shift around the dial numbers on the fly.  Not only that, but it also provides a handy layout of the rewards you obtain when your character levels up.  In order to cut down on the play-time a bit (the game still runs 2-4 hours as is), it is part of the standard rules that each player starts with a mission card.  In Talisman, you may recall having to make your way into the middle tier in order to get a warlock quest, but this handled slightly in Relic – while you start with a mission, you need to complete three of them in order to gain the key to the inner tier.  Luckily, you may draw a mission on the same turn you complete one and, if you find your active quest is too difficult, the space needed to swap them out is located on the outermost (and least difficult) tier.  The missions themselves generally involve nothing more than visiting a specific location or landing on the same space as another player, but give everyone a specific goal early in the game as they level up to face to dangers ahead. 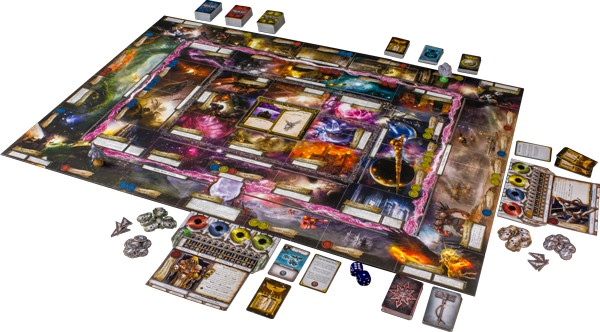 The actual mechanics of Relic are straightforward and simple: you roll a die and move that many spaces around the board, going clockwise or counter-clockwise, and then follow the instructions present on the space you land on.  Typically, you will be asked to draw one or more “threat” card and place them face up on your space.  These may involve monster encounters, objects you can loot, or events that may help or harm you.  This complete randomness is really the game’s most endearing quality.  While I love the most complex, strategic, brain-burning euro titles as much as the next guy, sometimes it’s equally fun to just get together with friends and sit down for a pretty epic adventure based entirely on luck.  You may encounter several powerful creatures in a row that utterly destroy you followed by a streak of excellent discoveries.  Adding to the chaos are a few great new mechanics to the classic structure.  First, there are the “exploding dice”.  Anytime a player or an enemy rolls a “six” during combat, the die “explodes,” meaning you roll another die and add the results to the previous roll.  As combat is based solely on one of three attribute numbers, plus the die result for both battling parties, this means that even the weakest enemy has the ability to defeat an extremely powerful player (an vice versa) if luck is on their side. 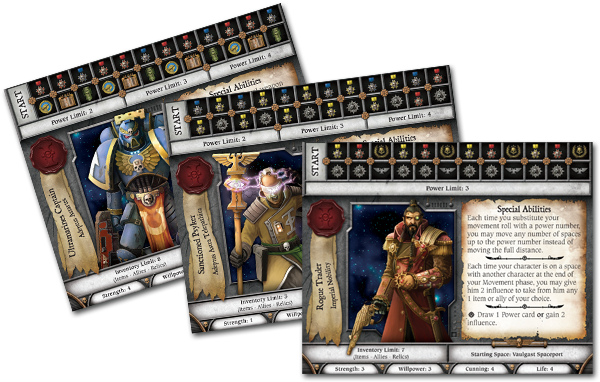 Mitigating some of this threat are power cards.  These cards may be obtained while playing the game and have two functions. They may be played for their text ability, which could grant any number of helpful effects, or can be used to supplement a die roll.  For example, as each power card has a numerical value, a “five” card may be placed to change the result of a “two” die roll.  This can be used for movement as well as combat and can come in extremely handy.  Upon defeating a monster, they are taken as trophies.  Acquiring and turning in six points worth of these trophies allows a player to level up, following the skill tree on their character card to see what they gain.

While most spaces will throw mystery cards at you, some (specifically the corner spaces) offer ways to heal yourself, grant access to the inner sections, or allow you to buy wargear – powerful weapons and armor to assist you in battle.  Once you fulfill three missions and are able to fight your way to the center of the board, you encounter one of five endings included with the game.  These may find you fighting an extremely powerful foe or pit players against one another in a final battle to be the last standing. 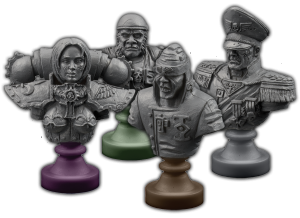 I also really dug the corruption system they have in place, which seems to make a lot of sense within the context of the source material.  Corruption cards can be obtained by characters which can either impede their progress or, more often than not, grant them a bonus.  Receive six total corruption cards, however, and your character is irreversibly altered and lost to madness.  This removes that character from the game permanently and gives the player the option of starting over with a new character or just being eliminated from the game entirely.  The artwork also relies heavily on the Warhammer 40,000 theme and players familiar with the universe will definitely appreciate the characters, places and weapons they worked into it, but you definitely don’t need to be a Warhammer fan to enjoy the game. I had zero prior knowledge of anything Warhammer-related going into Relic and didn’t mind the theme at all.  Furthermore, I really like the actual character pieces, which are rather robust and feature only the bust of your hero, rather than the tiny full-body miniatures that are common to most games in the genre. The bust format lends itself to higher quality, more detailed pieces that look fantastic (and are more fun to paint).

Whether Relic is something that will appeal to you, again boils down to your tolerance for games with luck-based outcomes. With minimal thought involved, it’s the gaming equivalent of a three-hour long popcorn movie.  That said, there is some great fun to be had and each session is almost guaranteed to erupt in both laughter (at the expense of others) and fits of screaming at your terrible dice rolls.  Considering the high production quality, number of components, and diversity of the cards (there are almost no duplicates among the huge amount of threat cards), the asking MSRP is extremely reasonable and, especially for fans of Talisman and Warhammer 40K, it’s a no-brainer.