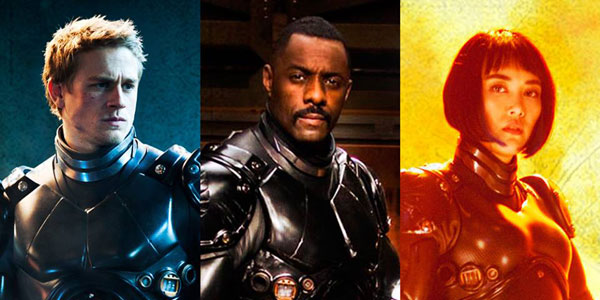 The last Pacific Rim trailer gives us a better look at the people inside the two thousand five hundred pounds of awesome.

The marketing for Pacific Rim, up to this point, has focused almost exclusively on the rich, expansive world Guillermo Del Toro has crafted, along with moments of the amazing, huge scale battles between the Jaegers and the Kaiju.  But aside from the stirring, internet meme-inducing speech by Idris Elba’s Stacker Pentecost, we haven’t seen too much about the character arcs of the people that serve as the heart of this film.

The latest trailer changes that, showcasing some insight into our hero, Raleigh Beckett (Charlie Hunnam)– he’s an ex-Jaeger pilot who quit when he lost his brother and co-pilot in combat, only to be pulled back in to fight the good fight by Pentecost.  Mako Mori (Rinko Kikuchi) is Pentecost’s second in command at the Pan-Pacific Defense Force, and she’s in charge of finding a new co-pilot for Beckett, knowing that she, herself, is the ideal candidate.

There’s lots of other great characters, too, who each play a role in the bigger story– each Jaeger is controlled by a pair of pilots, plus there’s the kaiju-loving scientist Newt Geizler (Charlie Day), who has an insane plan on how to handle the giant beasts, and Hannibal Chau (Ron Perlman), a black market seller who deals in Kaiju parts.

If you thought this movie would be nothing but wall-to-wall epic scale CGI action… well, you probably don’t know Guillermo Del Toro. He’s great with the action, and nearly fetishistic in his creature designs, but there’s more to his work than surface level coolness– he always finds a way to build true humanity into his films, no matter how fantastical they may be.  And Pacific Rim will be no different.  This last trailer gives us a taste of that corner of this universe, and it has once again increased my level of excitement for this movie.