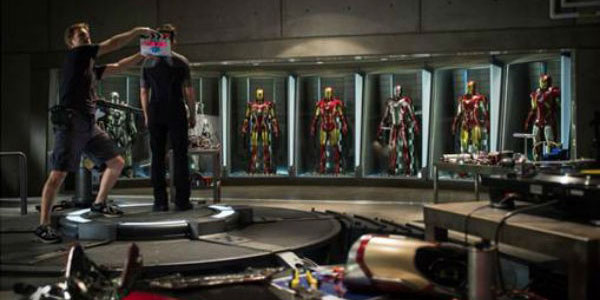 Iron Man 3 just started filming a few days ago, and now we have our first official image from the film. I love the recap/ historical feel of this image, which showcases all of Tony’s on screen armors thus far.

Between this shot, the recent reveals of Coldblood and Firepower as villains in the movie, and some spy pics showing James Badge Dale dressed as the Iron Patriot, there’s clearly going to be a whole lot of armor going on in Iron Man’s third outing.

Rumors have suggested the movie will be based on Extremis, but with all this focus on metal suits, I’m getting hopeful we may be in store for a cinematic take on Armor Wars instead!  There’s a lot that remains to be seen right now– is Iron Patriot actually in the movie (although obviously without Norman Osbourne in the armor), or were the recent spy photos just Detroit Steel with a new, more familiar look?  And there’s still the mystery of Ben Kingsley’s character… while many rumors have him playing The Mandarin, I’m still really hoping he’s actually playing Aleksander Lukin, the sinister ex-Russian general and current head of Roxxon (the company that turned Coldblood into a cyborg). Lukin and Roxxon would be a great bunch of antagonists to bring into the fold, since he has his tentacles in both Tony and Captain America’s worlds (hell, this is the guy who brainwashed Bucky and turned him into the Winter Soldier!).

Time will tell, but now that The Avengers has hit as big as it did, Marvel needs to make sure they keep bringing their “A” game to the followup movies. I have great faith in Shane Black, and wherever the story goes in Iron Man 3, I’m really rooting for him to absolutely nail it.