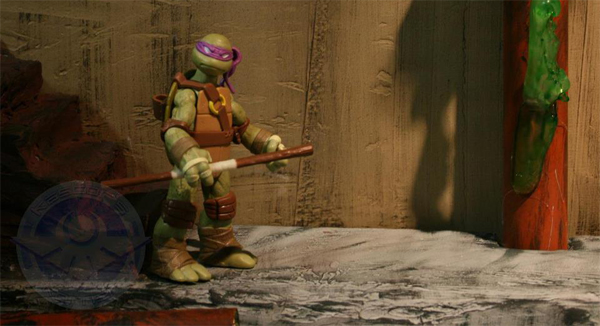 Playmates is being very bold with their ambitious relaunch of the Teenage Mutant Ninja Turtles, and the new toy line, being released later this year to support the new Nickelodeon cartoon series, is promising to be a fresh and cool new take on our favorite heroes on the half shell. We had the chance to get an up-close look at Donatello and Michaelangelo from the new line… keep reading for a sneak peek at these rad new figures!

Playmates’ TMNT presentation was one of the coolest things at New York Toy Fair this year, and when we checked in for the special press event, the Playmates’ reps handed us each a canvas TMNT swag bag. After getting a tour of the full toy line and a sneak preview of the upcoming cartoon premiering this Fall, I opened the bag to find a small box with the new TMNT logo… and inside, to my surprise, was one of the new Turtles! My box contained Donatello, and Jason got Michaelangelo, which gave us a first-hand look at one half of the Turtles team.

The first thing that’s very cool about the new Turtles is that each brother, just like in the new show, has a different build and an original body for the toy. Don is substantially leaner and taller than Mikey, with different colored skin and even texture– whereas Don is covered in some well-sculpted scale, Mikey is smoother but is covered in some very character-appropriate brown “freckles,” which add to his youthful demeanor. From what I saw at Toy Fair, Raph and Leo are both stockier, since they are the more athletic, fighter types, and I think the unique bodies for each brother really goes a long way to give each one an appropriate look and feel. It’s a great touch and one that I’m very happy to see Playmates include here.

The figures are modelled after the designs of the new TV show, which is a great amalgamation of several past versions of TMNT, going all the way back to the original Mirage designs… The Turtles’ stocky arms and legs get thicker as they extend toward the hands and feet, as is the case with actual turtles, and in addition to their belts and elbow and knee pads, each brother also sports some realistic-looking bandages wrapped around their hands and feet. Each Turtle also includes a unique belt with storage for their weapon of choice, and their iconic headbands. The figures have a slightly more comic-book feel that the cartoon versions, opting for classic pupil-less white eyes instead of the anime-inspired eyes from the new cartoon designs.

Each Turtle is loaded with some great articulation– a ball jointed neck, ball shoulders and hips, ball jointed elbows and knees, and hinged wrists. The shell prevents the figures from including torso articulation, but the rest of the joints have such a great range of motion it’s really not needed– there are so many posing options with these guys, and they are the best engineered toys I’ve ever seen Playmates release.

Don features a great headsculpt which shows the smart guy’s determination. His bo staff (painted here, but possibly cast in solid color for the mass release figure this Fall) fits very well in either one or both hands, or can be stored very snugly using a loop on the back of his belt. Sometimes you get a figure that just bleeds “cool” no matter how you pose him, and that describes Don perfectly– I have spent hours posing him in as many ninja action stances as I can think of and his personality comes through in each one.

Mikey is shorter, the smallest and youngest of the brothers, and his figure is equally impressive. With all the same great articulation as Don, Mike can hold tons of poses both with and without his nunchuks, which can be housed with loops on his belt or held in his hands. Mikey’s confident smirk is perfect for the playful, immature brother, and as I said the paint deco of brown freckle-like spots on his face adds to his youthful appearance.

I love how inspired by the original Mirage designs these new figures are, with the snubbed noses, stocky limbs and realistic deco like the bandages and leather-style belts. These are without a doubt the most badass looking Turtles we’ve ever seen at mass retail, and on top of looking completely cool they are super-fun to play with.

Even a few months ago, if you were to tell me that TMNT would be my most eagerly-anticipated toy line of 2012, I’d probably laugh– I have been critical of Playmates over the past few years, ever since they butted heads with NECA which lead to the early cancellation of NECA’s Mirage-based comic line. With that loss still a sore subject, I was skeptical about the new relaunch of TMNT with Playmates at the helm, but between the promising footage we saw at Toy Fair and the incredible level of talent, fun and coolness packed into these new Turtles figures, I’ve become a convert.

Playmates is making all the right choices with TMNT, and this relaunch looks like the real deal, combining just the right amount of reverence for the different incarnations of Turtles we’ve seen in the past and making it something fresh, new and cool. I absolutely cannot wait to complete my Turtles team when they hit retail this Fall, and if Don and Mikey are any indication of the quality and effort going in to this new line, then I will be all-in for sure.