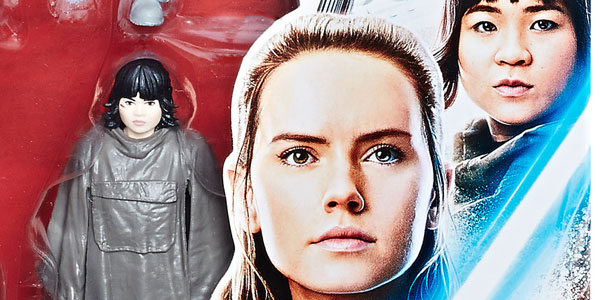 The Last Jedi themed four-pack box set has been revealed by Entertainment Earth, and it’s… underwhelming. Here’s five things that could have made it better.

One of the new traditions of the Disney era of Star Wars is a four-pack of 3.75″ action figures, released in tandem with the digital/ home video release of the subsequent film, which serves as a cap on the previous year’s toy line. Two years ago, we had the “Takodana Encounter” set, which saw the first, ever Maz Kanata action figure… along with a trio of repacks of Rey, Finn, and BB-8. Rogue One’s box set was a major improvement, as the Jedha Revolt flipped the format and delivered three unique characters– Saw Gerrera, Edrio Two Tubes, and the Imperial Combat Driver, along with just one repack… Jyn Erso.

So when it was revealed a few weeks ago that The Last Jedi collection would follow the same pattern, in a set dubbed “Battle On Crait,” my imagination went wild with the cool possibilities. Today, Entertainment Earth revealed the actual box set, and the final product is… less than exciting. Yes, we’ve got the same pattern seen in the Rogue One set, with three unique figures and one repack, but the character selection is nowhere near as on point. Per the EE listing, the box set is composed of Jedi Rey (repainted with salt on her feet), a Rose variant in her Crait poncho, a First Order Snowtrooper in a new white/grey deco, and a First Order Gunner, who looked cool… but saw all of 15 seconds of screen time.

This set feels like SUCH a missed opportunity, the first thing that came to mind when I saw the images was all the ways this set could be better. It kept bugging me, until I came up with a list of alternatives that would have made a more appealing (and potentially better-selling) set of figures.

That said, here’s my alternate concepts for a better “Battle On Crait” box set (spoilers for The Last Jedi follow… I’ll fill a gap with pretty pictures of the box set we’re getting in case you want to stop reading): 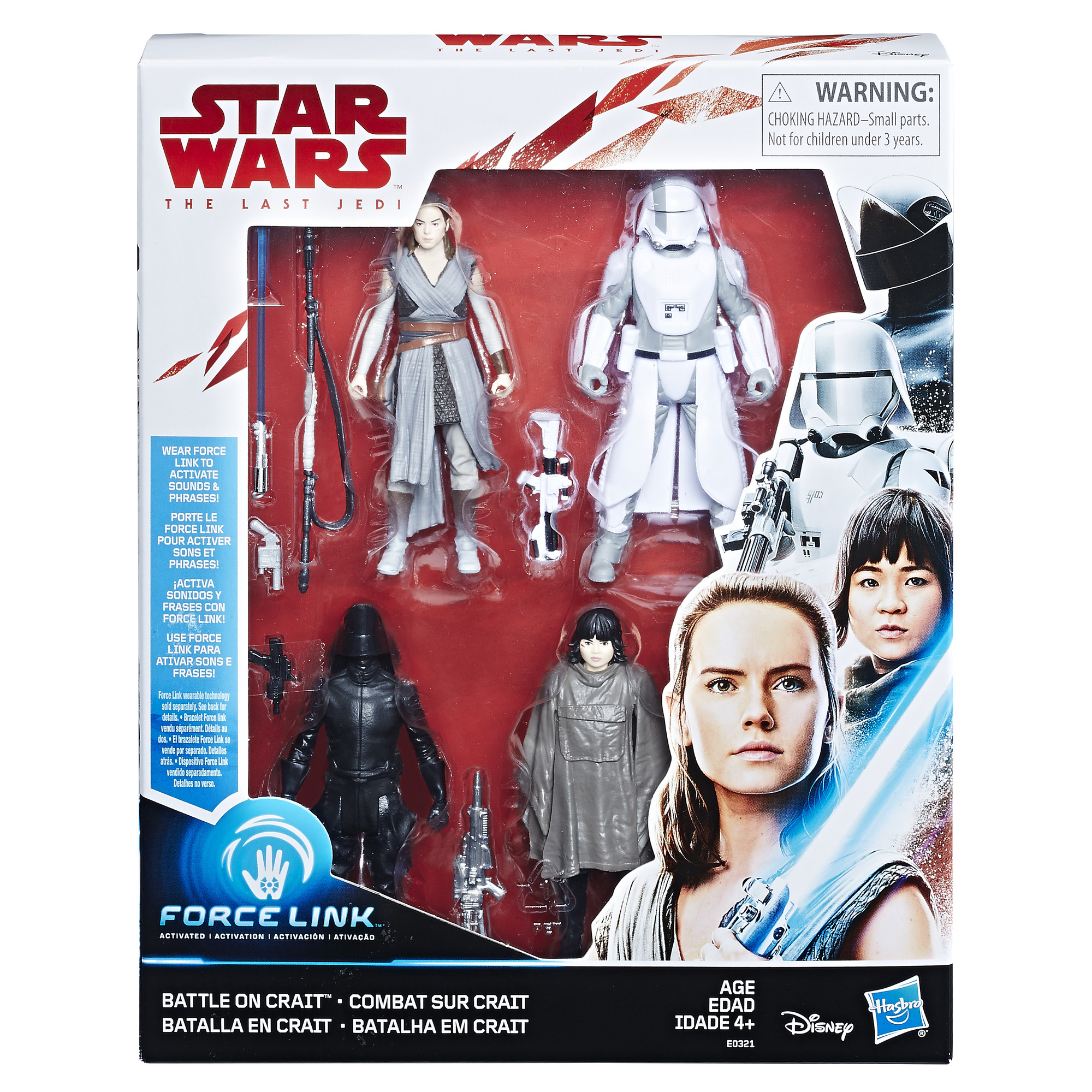 Since my first watch of The Last Jedi, I’ve been utterly convinced– Admiral Holdo was THE coolest new character introduced. And yet Laura Dern’s Resistance hero has been paid virtually no attention in the merchandising. Yes, a middle-aged human lady with purple hair might not be the most retail-friendly addition to Hasbro’s toy line… but an end-of-line box set seemed like the perfect avenue to release her in toy form. And yes, you might say she has no place in a Crait-themed box set, considering she never makes it to the planet… but I’d counter A.) She goes out like a BOSS in the movie, and B.) The entire fleet is in Crait’s orbit when that happens.

I can only hope that the 18-month window between Solo: A Star Wars Story and Episode IX gives Hasbro ample time to correct the mistake of not including Holdo in any of their toy lines.

Another major appeal of the film, for me, were the awesome new creatures we were introduced to. Sure, the Porgs were the most obviously toyetic… but the crystal foxes native to Crait were every bit as awesome, and I would love some cool translucent plastic toy versions of these “crystal critters.” Honestly, you could swap out any one of the four figures Hasbro is releasing for a crystal fox and I’d be happy. Yes, it would be an entirely unique tooling, but it’s smaller in scale which means less materials needed to make this cool creature a reality in the Star Wars toy line.

The vibe of the “Blu Ray” era 4-packs thus far has leaned heavily on delivering figures that were too odd, too risky, or too obscure for the main toy line. I feel that either First Order character could have stood on their own, based on their army builder status if nothing else. Lieutenant Connix, however, doesn’t have that luxury. Not only has this Resistance hero survived TWO Star Wars movies thus far (that’s already half as many as Han Solo, FYI), she’s portrayed by Carrie Fisher’s real-life daughter Billie Lourd, meaning there is a meta-appreciation to her character from the jump. Will we ever see a Connix figure in Hasbro’s toy line? I’d hope we do… but this sort of box set seems like the best option to make that happen, there’s no doubt.

A bunch of people who really suck are already criticizing the “Battle On Crait” box set for spotlighting Star Wars’ Disney-era “girl power” due to the inclusion of Rey and Rose. These dudes are lame and terrible, of course. If for no other reason than they’d be the exact same ones bemoaning the lack of a Crait poncho Rose figure (SUPER ARTICULATED, with soft goods poncho… because that’s all we’re willing to accept, LOL), were this set any different. But my beef– of all the set’s problems– is with the repack. Hasbro opted to repack Rey in this set, who has virtually nothing to do with the Crait battle, aside from rescuing the new Rebellion after the fact.  So– to borrow a sense of entitlement from those lame dudes referenced earlier– I’m going to assert my choice for the repack in this set should be Kylo Ren, not Rey. Kylo has a more active role in the battle, and aside from that, his Last Jedi 3.75″ figure kind of sucks… so this seemed like the golden opportunity to correct that mistake. The Force Link Starter Pack Kylo is a great 5 POA action figure, with an intricate sculpt that enhances his 5 POA status… but he’s wearing his helmet, which is destroyed in less than five minutes in The Last Jedi. That got me to thinking… how cool would it be to get this vastly improved Kylo body sculpt, along with a screen-accurate, unmasked head, combined into a single figure? This would be a smart and simple reuse that would give us the best 3.75″ Kylo figure yet.

Let’s get down to brass tacks– when you mention “Battle Of Crait” to anyone who has seen The Last Jedi, the first image you’re most likely to evoke is Luke Skywalker’s Force projection– the height of his badass Jedi potential, unencumbered by the harsh weight of reality. It is the zenith of wish fulfillment for the most basic of Star Wars fans… and director Rian Johnson manages to deliver on those desires, while simultaneously undercutting them. Yet, in terms of Hasbro’s toy release, the Battle Of Crait remains solely devoid of Skywalkers.

Most likely, Lucasfilm did not release the Crait Luke concept art to Hasbro within a reasonable production timeline to turn out an action figure… but I cannot think of any character from The Last Jedi more deserving of this toy spot than Luke’s astral projection. Sure, he may never physically join that specific battle… but his involvement provides a turning point for the Rebellion regardless, and his non-violent clash with Kylo Ren stands as one of the coolest/ least traditional action sequences seen in modern film history.

So what would my ideal “Battle Of Crait” four-pack consist of?…

Well, considering all the potential and limitations of the diatribe above, here’s my ideal lineup:

What do you think? Are you excited or disappointed by Hasbro’s Crait box set?