Flight Of The Navigator Remake Coming From Safety Not Guaranteed Guys 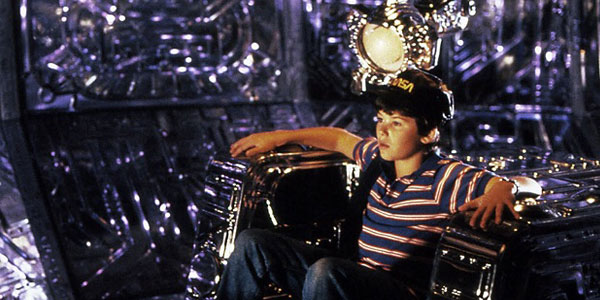 Colin Trevorrow and Derek Connolly. the team behind this year’s wonderfully charming Safety Not Guaranteed, have been recruited by Disney for a remake of Flight of the Navigator.  I’m apparently not alone on the interwebs in my sentiments toward the original– I can’t for the life of me recite any lines or even nail down much more of the plot than the basic synopsis on IMDB— but I recall LOVING this movie when I was a kid.  My parents would groan as I begged them to rent it for the umpteenth time from the video store (this predated the days of VHS tapes being sold at retail, although my folks actually offered to buy the rental copy from our video guy, to avoid the inevitable umpteenth-and-first rental).

I also have no idea how the movie held up, having not seen it in probably 20 years, but I know it starred Paul Reubens as Max, the robotic voice of the space ship… and that silver egg-shaped UFO, with the morphing staircase/ hatchway, was one of those absolutely iconic 80’s designs etched into my brain forever.

Trevorrow and Connolly really impressed me with Safety (check out my review here), and Flight really seems like a movie in a similar vein, what with the time travel angle, the soft sci-fi and the lost, outsider protagonists.  The duo has been hired to work from a first draft by Arrested Development scribe Brad Copeland, so there’s at least three solid talents backing this project already… and I can’t imagine Disney not asking Reubens to come back as the ship’s voice, if only to tug at those nostalgic heartstrings of thirtysomething nerds like me.

I tend to get a lot of flack from my friends when it comes to remakes, and this one’s obviously way too early to judge in any legitimate way.  But I’ll say this– Hollywood’s going to keep cranking out remakes, there’s really no stopping that.  But when some smart, talented people get involved with those reboots, I’m happy to give them the benefit of the doubt.