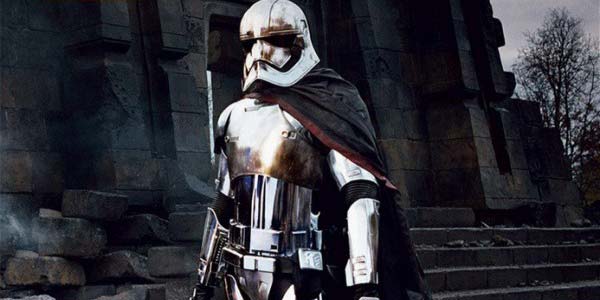 Chill– Captain Phasma is on her way.

Yesterday, in advance of Force Friday, Lucasfilm, Disney and their partners orchestrated a live streaming “global unboxing event,” as various who’s-who in the geek sphere shared videos revealing toys and other stuff from the new Force Awakens collection.  It was kind of fun to follow, if you missed it, but the only really big reveal came at the end, with a casual shot of a second wave of 6″ Black Series Figures.

The new lineup includes predicted fan favorite Captain Phasma, Poe Daemeron, Constable Zuvio, and the Guavian Enforcer.  Apparently, this wave is already out overseas, so while they didn’t surfaced stateside in time for Force Friday, they should start showing up in fairly short order.  Also revealed in the video was the First Order Snowtrooper, who will be a Toys R Us exclusive.  The more cool looking Stormtrooper variants we get, the better, as far as I’m concerned.

Insider buzz has suggested there will be three to four waves of Force Awakens figures in the Black Series, and  I tend to believe these sources even more now.  I honestly don’t see Hasbro not releasing updates of Han, Luke and Leia by the time this line is over, and there’s a bunch of other seemingly major players– General Hux, Supreme Leader Snoke, Maz Kanata– yet to get their spot in the line.  So that’s two waves more, right there.

I’m all for it– going heavy into the 6″ series will help soften the bittersweet blow of the 3.75″ Black Series switching to a Wal-Mart exclusive SKU, and so far based on Wave One, Hasbro really brought their a-game to this line.  What do you think?  How deep do you want to go into the 6″ Black Series for this movie?

Credit to Action Figure Insider for spotting the new Black Series figures in the video!