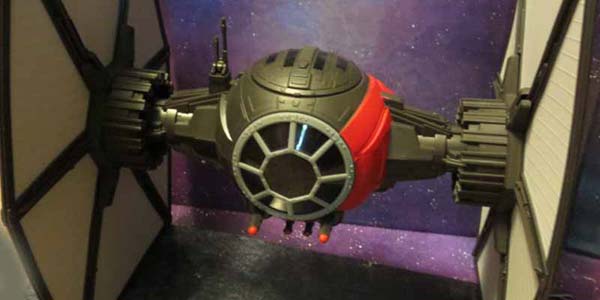 Hasbro brings the new and improved Tie Fighter to the Star Wars: The Force Awakens collection.

As of Force Friday, we now officially have more visual cues for Star Wars Episode VII than anything else from the movie, and as seemed to be the case earlier on, we will be seeing many iconic staples of the Star Wars universe with stylistic changes that took place over the 30 years since the last time we visited this galaxy far, far away.  One of the most notable ships from the Original Trilogy were the Tie Fighters, the main spacecraft of the Imperial forces, and the new iteration of the Empire, the First Order, carried the vehicle over into their own legion.

The new Tie Fighter has been captured in plastic by Hasbro, as part of their 3.75″ Force Awakens toy line, and it’s an excellent vehicle.  The overall design is very familiar, but this all new sculpt adds an impressive amount of detail to both the flight pod and the hexagonal panels that form the ship’s wings.  I love all the rich details in this sculpt, which add both a texture and a sense of mechanical logic to the vehicle.  While the ship is easy to recognize right away, there’s a few tweaks to the design which make the First Order version unique.  The most notable is probably the back window, a clear plastic slat across the back of the pod, which correlates to the second seat in the cockpit, presumably for a gunner or co-pilot.  It’s impressive that such a tight space could comfortably fit two action figures, but the Star Wars team at Hasbro figured it out.  Yea, there’s not much space in this new “bro pod,” but it’s neat to have a vehicle that fits both its intended passengers.

As far as colors go, the Tie still retains the black and grey pallet of the original vehicle, but the tones are considerably darker, which makes the brilliant streak of red at the base of one of the wings all the more eye catching.  I’m curious if this red patch is a simple design flourish, or if there’s context behind it (also worth noting, this appears to be the same red as C3PO’s new arm, based on production shots).  Either way, this line instantly draws the eye, breaking up the otherwise darkly colored vehicle. 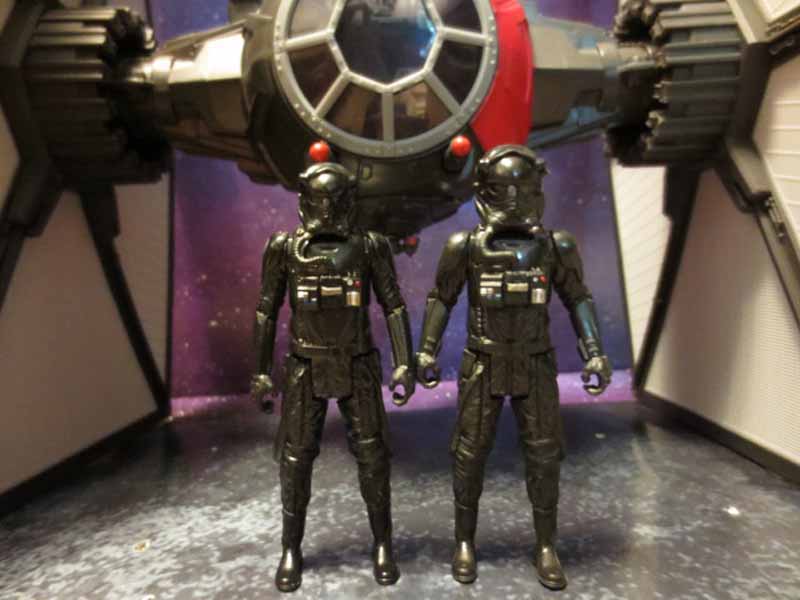 I think this Tie has a fairly good sense of scale with the 3.75″ action figures.  The pilots sit inside comfortably, and seeing others standing outside the ship looks about accurate to what we’ve seen on the screen.  The new vehicle is pretty much the same size as the vintage one, but that’s not where the comparisons end.  The First Order Tie Fighter also carries over the classic action feature, which lets you “explode” off the wings with the push of a button on the base of the flight pod. This feature is still really fun, and the wings plug in place nice and secure, meaning the spring loaded feature likely won’t go off unless you want it to.  If that weren’t enough, the Tie also includes a spring loaded missile launcher built into its body, making this one of the most economical toy designs I’ve seen in a long time, when you consider the amount of stuff packed into the relatively small space.

Yes, the ship has two pilots now, but Hasbro sort of met us in the middle in regards to this set.  We get one pilot figure packed along with the ship, who sports five points of articulation like all the basic Force Awakens figures, as well as a blaster that plugs into the canopy and a removable helmet and breathing unit.  I’m a sucker for removable gear like this, although the decision to make the chest piece removable is a strange one, because the pilot’s chest ends up with a huge hole in it when the piece is not in place.  I wish hasbro had kept with their original idea, as seen on the box art, with the figure’s helmet coming off and the breathing tubes able to disconnect from the fixed position chest piece.  That would have been a better option to let us display a helmet-less Tie Pilot.

At about $40 retail, the First Order Tie Fighter is a bit on the steep side.  I can’t say I regret the purchase at all– it’s a great update to one of the coolest ships in the Star wars mythos– but if you’re not as die hard about these new renditions of OT vehicles as I am, you may want to wait for one of the inevitable sales as we get closer to the movie’s release.  The Tie Fighter has been flying* off the shelves, like many of The Force Awakens toys, but it is being carried by all major retailers, so in a few weeks it should be pretty easy to find. 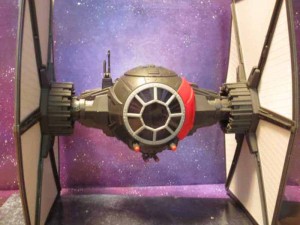 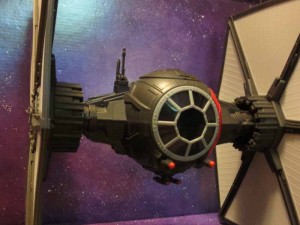 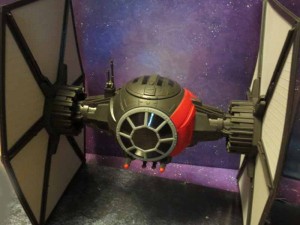 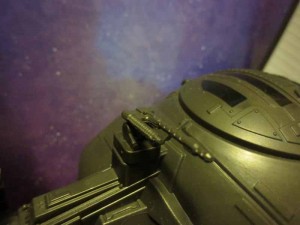 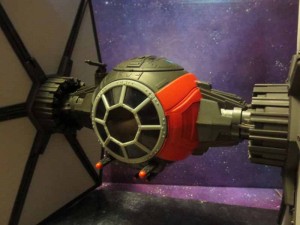 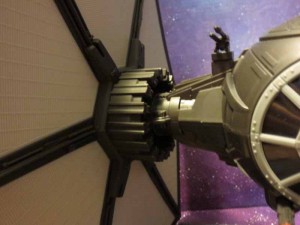 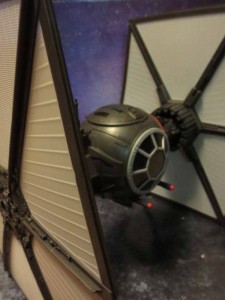 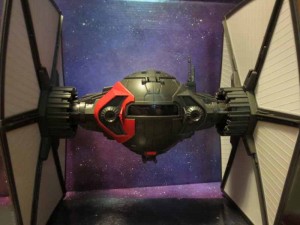 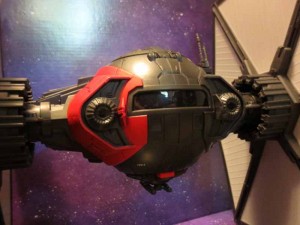 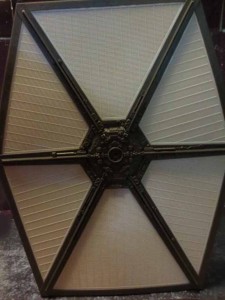 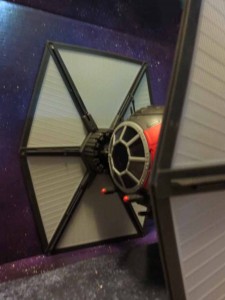 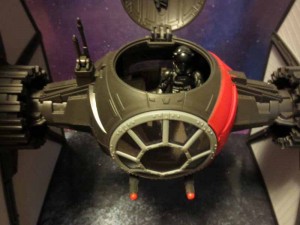 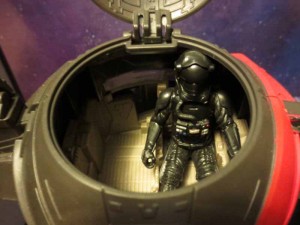 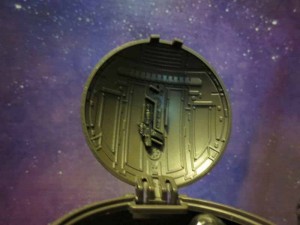 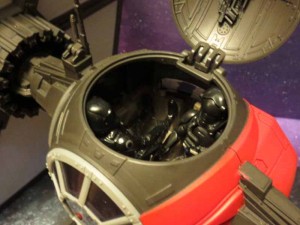 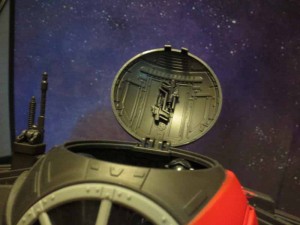 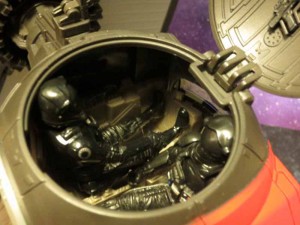 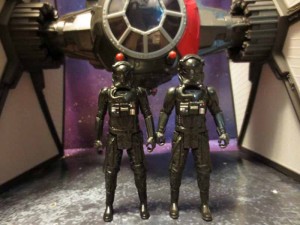 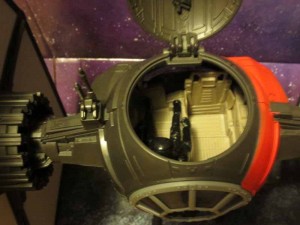 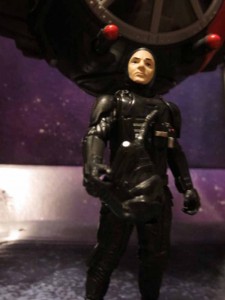 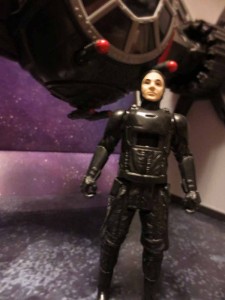 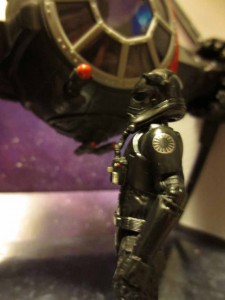 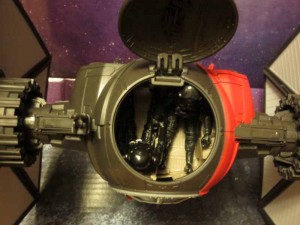 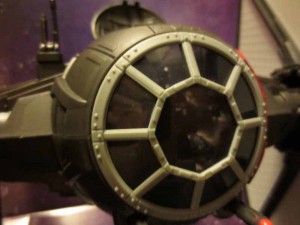