What Will We See As Star Wars: The Force Awakens’ Preview Toy? 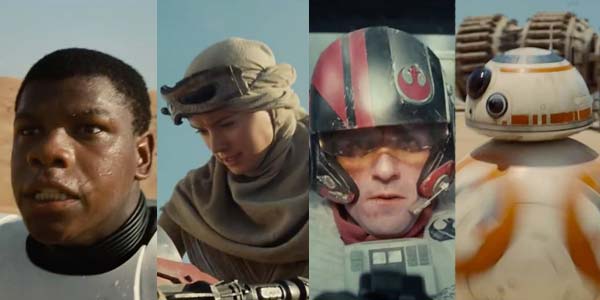 Now that we’ve gotten all that trailer business out of the way for Star Wars: The Force Awakens, it’s time to talk toys!

There’s a lot of tradition that goes into Star Wars movies, and– being the merchandising behemoth it has always been– action figures have always been a big part of that. To date, every Star Wars movie has offered some kind of “Sneak Preview” toys, and I fully suspect we’ll see Hasbro and Disney continue this trend in advance of the release of Episode VII next December.

But what will that “Early Bird” release be? Guessing what it could be– based on the little information we have about the new movie– well, that’s the fun part!

Let’s start with a look back at what we’ve seen in the past for Sneak Preview figures. Of course, you’re probably familiar with Kenner’s ingenious “Early Bird Kit.” This was basically the first ever toy pre-order– you paid up front, and when Kenner’s first action figures were produced, you’d receive your four-pack of figures including Luke Skywalker, Princess Leia, R2D2 and Chewbacca.

Kenner changed the Preview toy convention for Empire Strikes Back and Return of the Jedi, offering a mail-away figure for each movie– In advance of Empire, kids could clip UPCs and mail them in to redeem the first ever Boba Fett figure, while Jedi offered an advance release of The Emperor, in toy form for the first time.

The prequels picked up the reins, offering a mail-away exclusive of their own before The Phantom Menace (our first Mace Windu figure), as well as a retail-exclusive STAP vehicle with Battle Droid pilot. Hasbro changed the game again for Episodes II and III, though, opting to release a four-figure “Movie Preview” wave for each film. Attack of the Clones‘ wave included Jango Fett, a Clone Trooper, Zam Wesell, and R3-T7… Revenge of the Sith saw the release of General Grievous, a Wookiee Warrior, Tion Medon and R4-G9.

So based on that history, the law of averages suggests we’re most likely to see four figures in an Episode VII Preview release from Hasbro. Conveniently enough, The Force Awakens‘ teaser features four new heroes who would all make for great action figures… then again, the trailer also shows off one of our villains, and some sweet vehicles… so let’s start guessing who could make the cut for a potential four-figure The Force Awakens Preview Wave of action figures!

We don’t know for sure why John Boyega’s Finn is wandering around a desert doing his best Lawrence of Arabia impression wearing Stormtrooper armor– but he is playing one of our new lead characters in Episode VII, and we will undoubtedly see some toys based on him. So why not start right away?

I don’t think there was any other shot in the teaser quite as evocative as this opening shot, so I’m hoping Hasbro follows suit and delivers Finn in his Stormtrooper armor as a Preview figure to keep the tease going.

Most accounts suggest that Rey will be the co-lead of The Force Awakens… if not our new main protagonist. Either way, I think it’s a totally safe bet that we’ll see her as soon as possible in toy form… Princess Leia made the cut in the Early Bird Kit lineup, and it would make a lot of sense for our new main female character to get the same sort of treatment as an Episode VII preview figure.

This one is all but a guarantee– I love BB-8, you love BB-8… we pretty much all love BB-8! It’s a perfect tweak on the classic Astromech design which feels both unique and remains very much in-line with the vintage Star Wars aesthetic… and if you consider the number of droids we’ve seen as preview figures for past movies (four out of six films have seen a droid offered as a preview figure)… I think this little gal is going to see release sooner than later.

We don’t know much about Poe Dameron in the new movies, other than the fact he’s apparently a fairly talented pilot– the teaser shows him in the cockpit of an X-Wing, and rumor has it he will be flying the Millenium Falcon as well, while Han Solo and Chewbacca stay at the helm of a Star Destroyer.

I’m not sure we’ll actually see Isaac’s teaser trailer pilot outfit get the toy treatment before the main toy line is released– three humans and a droid might be a sort of dull lineup for the Preview wave– but I’m sort of so in love with the slightly streamlined new pilot uniforms that I certainly wouldn’t complain.

Is it Adam Driver? Gwendoline Christie? Who cares! The new Sith-like villain Kylo Ren gets a quick yet already iconic scene in the teaser and even this little glimpse has me stoked to own this character in toy form. I know the lightsaber broadsword isn’t everyone’s cup of tea, but I think it’s badass, and I will absolutely be picking up a roll play version to menace my cats next winter.

Will we see a villain released as a Preview figure for The Force Awakens? I honestly doubt it– JJ Abrams has a history of keeping his bad guys in the shadows before a movie’s release, and while we’ve seen some bad guys offered as preview figures, there were none in the Early Bird set, which I predict will be our most likely analog for this film’s toy releases.

If we DO get a bad guy released as a Preview figure, I’d bet it would be one of the new, revamped Stormtroopers. These guys look just different enough that they’d be unique and noticeable on the shelf, and it would help us troop builders get a leg up on amassing our latest army.

Plus, Hasbro could easily share tooling between a generic trooper and Finn, so that’s kind of a win-win, right?

We’ve seen a few vehicles offered as Preview items for past movies, and I think the newly redesigned X-Wings would be a good candidate to get released in advance of the film. We know the basic ship design– there’s some minor tweaks like the thrusters moving to the body instead of the wings– but the basic silhouette is the same. It might be a safe choice as a preview, being so similar, but that safety feels like something Abrams and Disney’s marketing team might favor for their first new Star Wars movie.

The speeder Rey rides is not the least likely thing we see in the trailers to get the toy treatment… but like the X-Wing I just don’t see this being exciting enough to get released as a pre-movie toy line teaser. I can appreciate the solid, practical design and clear silhouette of this vehicle, but I can’t say I have any burning desire to own it in toy form.

Here’s the thing– we don’t know if Hasbro will model any Episode VII preview toys based on what we’ve seen in the teaser trailer… or even if they’ll offer anything at all. But I can’t see them ending Star Wars’ tradition of exciting teaser toys now… especially not when there’s so much good will to bolster and money to be made.

I think we’ll definitely see something… specifically I would predict preview figures in multiple scales, since The Black Series is most certainly sticking around for 2015.

As for specifics, my semi-educated, totally unsubstantiated guess would be this:

1. A set of four 3.75″ scale figures… Finn in Stormtrooper armor, Rey in her desert gear, BB-8 and an as-yet-unseen (probably inconsequential) alien. This might be a four-pack like the Early Bird set, or a wave of single carded figures, and we’ll likely see it during the summer, with the toy line proper launching at mass retail in October.

2. One 6″ Black Series figure, released as a Comic Con exclusive… I’d say either Kylo Ren with his three-pronged lightsaber or a Stormtrooper. This figure would get a variant in the main line, which would also launch sometime in October.

3. I doubt we’ll see a preview edition vehicle, but I’m totally confident we WILL see a 6″ scale Black Series X-Wing on shelves for next Christmas… Hasbro has a track record of leveraging current movie properties to get some big toys to retail, ones that would otherwise never get picked up. There’s collector demand for a large scale X-Wing, sure… but I think if we’re ever going to get one, it will be a year that retailers’ minds have a fresh memory of the selling power of Star wars as a franchise, and 2015 will be just such a time.

So those are my official Episode VII toy predictions! What do you think? Am I off base with my picks for the Preview figures? Or do you think Hasbro will abandon the Preview gimmick altogether? And most importantly… based on what we’ve seen so far, are you planning to collect The Force Awakens toy line?