Diamond has created a comprehensive guide to the new items – What’s @ Comic Shops – Star Wars: The Force Awakens e-Catalog (http://issuu.com/previews/docs/comic_shops_-_star_wars_catalog_201 ) – that it will promote online, through social media, and a special e-newsletter to its consumer e-newsletter subscribers starting at Midnight on Friday. Retailers are encouraged to link to the new e-catalog and promote it to their customers as well, when the catalog goes live on midnight Friday. 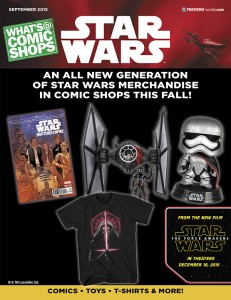 “Our goal is to remind comic shop customers that their comic shop has been a great source for Star Wars merchandise over the years– and they will be again for the new film and its merchandise,” said Diamond’s Consumer Marketing Manager, Andy Mueller.  “We’ll be hitting all of the constituents from PREVIEWSworld, FreeComicBookDay and ToyChestnews to remind them about Star Wars products coming to comic shops and showcase the e-catalog for them to check out.”

“We’ve been working with our suppliers to ensure that we have a great mix of Star Wars product available to comic shops,” said Diamond’s Director of Vendor Development, Eric Burkhardt.  “Many of the items from Hasbro and Funko are currently in stock and available for immediate order on Friday, and we will continue to stock new items as they become available for shipping.”

Suspense has built steadily around the myriad toys that have been created in advance of the Episode VII in the Star Wars series, and demand is expected to be high as consumers add these items to their collections.

“All in all, mass retail outlets will reap the initial benefits of new Star Wars: The Force Awakens merchandise, but comic shops won’t be far behind as retailers have cultivated their shops as the headquarters for all things Star Wars over the years!” concluded Mueller.