Fractured Soul for the Nintendo 3DS is a game full of contradictions. It’s both accessible and absurdly difficult; frustrating beyond reason but incredibly addictive; boilerplate but unique. But it’s definitely not for everybody. Keep reading to find out if it’s right for you.

After a 20-minute download from the eShop, I was ready to dive into Endgame Studio’s eight-year labor of love. One of the first things I noticed upon starting up the game is that the little “3D” light next to the depth slider turned off — stereoscopic 3D visuals are not part of the game at all. This works in the game’s favor, as it depends on both screens looking exactly the same. One screen having depth and not the other wouldn’t add anything to the game, and it might have even proved distracting.

Fractured Soul is a puzzle-platformer that wears its retro influences on its sleeve. You can only shoot horizontally; none of those newfangled diagonal projectiles. You have a small health bar and you will die a whole lot. Luckily, there have been some updates to the classic formula; you are given unlimited lives and there are merciful checkpoints given throughout most levels. 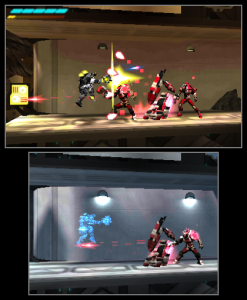 Your goal is always to run from one end of a level to the other and go through a doorway (unless you’re playing a shoot-em-up level, but more on that later), but it’s never that simple. You control one character who exists in two different dimensions, one on each screen. When you have direct control over one, the other appears as a shadow, imitating the moves of the other. But you can switch between them at any time with a tap of the L or R button, which comes into play in any number of situations. For example, there can be an object blocking the path of the player in one dimension but not the other, so a quick shift is necessary. As the game progresses, you’ll be dodging lasers, jumping on platforms, defeating enemies and generally doing what you’d expect to be doing in a platformer, only you’ll be keeping track of double what you normally would.

If this all sounds crazy, it’s because it is. It’s also insanely, gut-wrenchingly, put-your-fist-through-a-wall difficult. Most levels come down to bouts of trial-and-error and memorizing every single obstacle, one chunk at a time. Your timing also has to be flawless, as some of the hardest levels see you being chased by a laser-wall of death that will send you all the way back to the beginning with the slightest error in judgement.

With this level of challenge, though, comes one of the greatest senses of accomplishment I’ve ever experienced in a video game. Since each level is designed to test your focus, patience and timing to such a crazy degree, finally reaching that door makes you feel like you’ve really beaten the odds and come out on top. Granted, you might never reach the “par times” at the end of each level, but if you’re a fan of speed runs and a glutton for punishment, you can replay each level for a faster time. 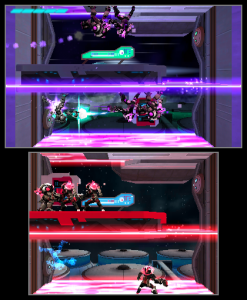 There are also Bullet Hell type levels, which have you controlling two ships and fighting against an onslaught of enemies and multi-colored bullets across both dimensions. The goal here is to keep defeating as many enemy ships as possible to prevent your ever-dwindling life bar from depleting. These are actually some of the most fun parts of the game and I wish there were more of them, even if some of the side-scrolling levels had to be left out to make it happen.

Graphically, Fractured Soul looks like what you’d expect from a game that was originally developed for the DS. The environments are all fairly basic, though they do take on some interesting elemental traits. The variety of enemies isn’t all that big, but they’re never a huge focus in the game. Every level is essentially a bunch of puzzles seamlessly stacked on top of one another, and enemies only serve as minor annoyances between platforming segments. There’s also no story to speak of, but it’s obvious from the general aesthetic and the vague sentences that appear at the start of every new level that it’s some kind of science fiction…thing.

So, is Fractured Soul for you? If you’re easily frustrated by punishing games or need to have your hand held every step of the way, probably not. But if you’re a 3DS owner looking for something different and you’re not afraid to challenge yourself, definitely give it a shot. There’s more than enough content here for a physical retail release, but Endgame decided to release it exclusively on the eShop for less than half the price of one ($11.99). Once you really get the hang of the game’s bizarre mechanic, you’ll be glad you put in the time.