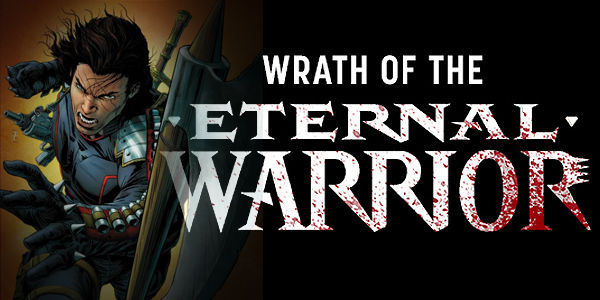 After Valiant’s big reveal that the Eternal Warrior would be returning to their universe, debuting in the pages of Archer & Armstrong, we managed to catch A&A writer and all-around-nice-guy Fred Van Lente between his panel appearances for a quick chat. Check out what he had to say about his work on the series and what’s in store for the near future.

Kastor’s Korner: Ok, let’s get started by discussing the big news about the Eternal Warrior arc in Archer & Armstrong that was just announced.

Fred Van Lente: Sure, sure.

KK: So we’re going to get to see Gilad again in issue #5?

FVL: Maybe sooner, but definitely in #5.

KK: Well, he’s technically in the first issue… But when we first see the character, he’s dead and laid out on a slab. Can you talk about how you’re going to be re-introducing him as the Eternal Warrior.

FVL: He’s still on the slab. He’s just kinda lying there and doesn’t say anything and, using a catapult, these people just kinda…[trailing off] chuck him…at other people and, as the Eternal Warrior, he just sails through the air, still wrapped up in that mummy thing…(laughing) No, he’s gotten a lot better since his first appearance in Archer & Armstrong #1 and, in the ensuing ten thousand years, things have happened that’ve made him much more active.

KK: Was it that the Boon worked?

FVL: Looks like the boon worked, but who did I it work on? It didn’t necessarily work on Gilad…

KK: Do you have plans to keep Gilad as a recurring character throughout the series or does his appearance serve more as a possible jumping off point into his own series?

FVL: Possibly more of the latter…I mean the book’s called “Archer and Armstrong” so I want to keep them front and center, but I’ve always wanted to have Armstrong’s family, Timewalker and Eternal Warrior, always being really important parts of his life in the book — even though Armstrong and Eternal Warrior couldn’t have more divergent personalities. I mean, they really don’t get along. Gilad thinks Armstrong is wasting his life boozing and whoring and hanging out with writers and artists and scientists — things that really excite Armstrong. Meanwhile, Armstrong feels Gilad’s wasted his life through perpetual war and conflict.

KK: And so we may be seeing more of Ivar as well?

FVL: Ah, you already have…

FVL: (laughter) But yes, and you already have. Give it time, you’ll see.

KK: Are you pretty familiar with the original take of Eternal Warrior?

FVL: Yes, I’ve read the first year of the original series. It’s really in my wheelhouse — I love the idea that it’s constantly cutting back and forth between decisions Gilad made in ancient times and things that impact him in the modern day. One of my favorite things is all the historical battles, and a good chunk of Archer & Armstrong #5 is a flashback to Armstrong, then known as Adam, fighting with Gilad during the unification of China (during the warring stage) which was about 250 BC and when the Great Wall was built — and so it’s a big fight like in a Jet Li historical picture. It’s pretty amazing.

KK: Will we be going back to Mesopotamia as well?

FVL: We will be going back to Mesopotamia at some point, but the fifth issue is all China.

KK: Was there anything about the original take on the character that you absolutely didn’t like and chose to avoid incorporating here?

FVL: Not really, although he is refined slightly. I would make the comparison that the original character was more James Bond and this iteration is much more Jason Bourne. He’s much more intense, lethal, brutal you might even say. To me, he’s like if Frank Castle couldn’t die — he’s a one man war on everything, not just crime.

KK: Were you involved with his visual redesign at all?

FVL: I thought, of all the Valiant characters, he had one of the most impressive designs. I don’t think we’ve changed his design much at all — it’s pretty timeless. It’s obviously not quite as obviously a 1990’s leather get-up but, the spiked gauntlet and all that stuff, I just thought was great. We’re not touching that.

KK: Can you give us any hints as to what new surprises you have for us to look forward to in the coming months?

FVL: Sure, well you can’t really have the Eternal Warrior without the Geomancers, which is another important concept of the Valiant Universe. One will be the Sorceress Supreme of the Valiant Universe — someone who sends Gilad on missions, and who Gilad protects and all that stuff. I hate to use the word “realistic” when we’re dealing with magic and sorcery…but [trying to describe her without giving anything away]…she’s going to be a big part of his life and we’ll be introducing her in Archer & Armstrong #6.

KK: And I’m sure we’ll be seeing plenty more of your wacky villains like the One Percent?

FVL: Oh yes, we actually bring back a venerable Geomancer villain called Elyot Zorn, who’s from the original Geomancer series, but he’s more of a Donald Trump/Koch Brothers type in this. We were discussing that Archer & Armstrong #6 should feature the first variant cover to have a toupee. Instead of Cromium, it just has hair coming out of it. [laughter ensues]

KK: Compared to the original Archer & Armstrong series, which delved into some fairly serious (and sometimes dark) territory, you’ve kept the tone very much lighthearted and fun, which really makes the book stand out. Was that a deliberate choice for the series or simply your style of writing?

FVL: I would say it’s more my style of writing. I really enjoyed the first trade of Barry Windsor Smith’s run on Archer & Armstrong, but it did seem sort of rootless and tended to ramble on and on occasionally — and unfortunately, in our competitive market, you don’t have the luxury to, well, “ramble” for lack of a better word with a very picaresque structure where things can just bleed into each other. So, we needed more of a structure for our book and that’s where the Boon comes from and that’s where the Sect and all the different factions of the Sect come from. And yeah, we did clean the Archers up a little bit — they’re no longer child-murdering rapists so..(laughs) I hope anyone who complains about their depiction remembers that we actually gave them a bit of a makeover in this comic. It’s just different sensibilities — I can get pretty dark when I want to but I guess I just don’t really have any plans to do that. Harbinger and Bloodshot and X-O, in their own way, are very realistic and very much in a “PG-13 action movie” mode, which is terrific — but we’re really off on our own little planet, doing our own thing and, to that extent, it definitely gives the line some variety in terms of tone.

KK: Absolutely. It really helps the book stand out and it’s a blast to read. You constantly transition between these great humorous situations into full-on adventure flawlessly.

KK: To wrap things up, how has your experience been working with Valiant?

FVL: No other mainstream comic company would have let me get away with the One Percent or the Archers and their creationist theme park. It’s great having a young, hungry company who’s willing to take risks because, a lot of times, the bigger companies are more concerned about maintaining their level “up here” that it makes them very risk-shy. It’s good to be able to have that freedom with Valiant.