Fred Van Lente Takes on History With His Action Presidents #1 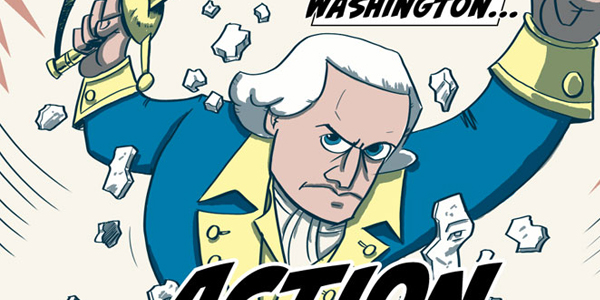 Can one of the hardest working writers in comics, Fred Van Lente, put a new twist on history?

With his own twist Fred Van Lente tells a story about how George Washington lived and died in America. A great way to bring history up to date without the boring textbook feel that children read everyday for school. In this book Van Lente brings facts to light that prove George Washington wasn’t one of the common people, in fact he was considered almost royalty during his time. What was called The Northern Neck Of Virginia was considered one of the richest communities during that time, and marrying Martha Cuttis with all her land and his inheritance made Washington one of the wealthiest men in the new country.

Washington’s first brush with war was in 1755 when the French along with their Native American Allies tried to attack what is now known as Pittsburgh. Losing this battle nearly cost him his life, but made the British realize they need to keep troops present to maintain ownership of North America. Without giving the whole story away the exciting twist on past history gives an all new feel to what was once considered boring.

Fred’s take on History only solidifies his ability to tell a great story even when the odds are against him. This is a must read for everyone. Teachers take note this could add excitement to an otherwise mundane classroom and stir excitement among children.