Frosta Is Left Out In The Cold 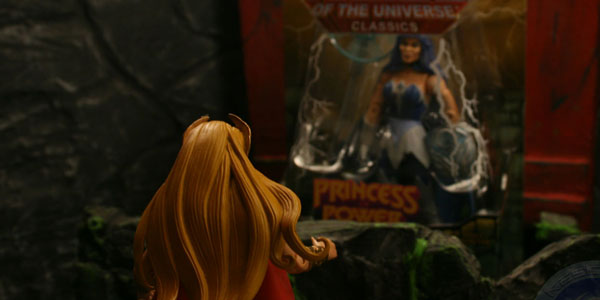 October provided MOTUC fans with three new additions to the ranks, and a fantastic new array of weapons from the Great Unrest weapons pack. Princess of Power fans will have a heavy hitter joining the Great Rebellion with Ice Empress Frosta. Between her and new additions to the ranks of the Horde and the Snake Men, it seemed like October would be a surefire win… until Mattel Design’s Ruben Martinez got his hands on them. There were constraints placed upon Mattel to stretch resources to cost out three $20 action figures, and logistically, they failed on all fronts, most dramatically with Frosta.

As far as sculpt, Frosta is phenomenal– the Four Horsemen have done it again. Some fans understandably wanted a look that was more Filmation-esque and less caricature in her features, but she looks great to me. She is by no means an ugly figure. Some girls naturally have wider eyes, and speaking to her detractors, Frosta is no anime character. Frosta’s belt and gloves have impressive details that harken back to the vintage toy, as she should. The cape and hair on Frosta, outside of the one tuft of hair swaying away from her face, are some of the most visually impressive I have seen in the line. She stepped right out of Filmation. My one nitpick with Frosta is that the thigh-high boots and cape could have had a similar vintage toy treatment. 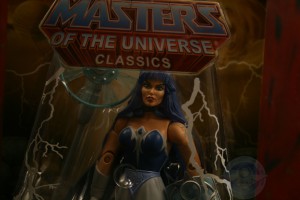 But past the sculpt, Frosta is marred by a number of major logistical issues– far more than just the much-publicized swapped forearms, and they add up to a figure that is, ultimately one of the biggest failures in the MOTUC toy line.  Starting rant: Frosta’s back bodice actually came unpainted. Folks– she is a collector’s figure. I assume they decided this because they thought the cape would hide it, but I find it very hypocritical for the Brand Manager to refer to the Bandai of America’s Thundercats as “crappy” when a hallmark of Bandai of America’s “crappiness” is not painting the back of their figures!

In addition, the “white” her costume was in fact gray– don’t be fooled by rhetoric or other reviews– this is not the pale or dirty white given to Teela or She-Ra… it’s gray. She is as gray as Vykron. This was no accident, but deliberately done by Mattel Design to match the gray tone on her weapons– the gray of her gloves matches her wand exactly. 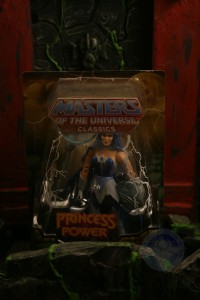 Never have I thought they would do something so blatantly against what the fanbase pleaded not to happen. Fans requested white deco since Toy Fair, and as recently as San Diego Comic Con, fans had their gray concerns allayed by Scott Neitlich himself, assuring us that her deco was still not finalized and to “stay tuned”. She looks nice– as nice as the “snow princess” could look. Why design took creative license to change the deco of white, consistent in every media incarnation of her, and make her gray shows a clear disinterest in the character and the fanbase. These choices just about ruin an amazing sculpt. As an aside, for added insult to injury, her forearms are swapped, her hip pins are gray instead of her leg color of blue, the hair is clear and dark instead of the baby blue she has always had, and the cumbersome mechanical wand she was given can’t even spin. So why Design went this route is beyond me– they misfired on all aspects of this figure.

With Frosta, Mattel Design made it a point to destroy any hope the fans have of seeing the figures looking remotely like the prototype. Unless they were looking at each figure individually with respect to budget, I can’t possibly explain away the moronic decisions Ruben has made. I really wish I wouldn’t phrase things in such a nasty way, but I look at Frosta, with her gray paint, an unpainted back, a weapon that was sculpted with a spinning wheel that doesn’t spin, swapped forearms (thankfully, not intentional this time), and a fully-painted shield they could have dropped since she never had one to start with. They couldn’t drop the shield to paint her back, or at least kept it unpainted as an ice construct? 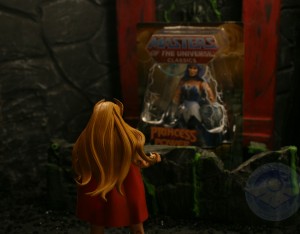 I have four Frostas heading back to Ontario, CA to get a refund– I had to finally draw a line here. It wasn’t the forearms, Scott.  It was everything else. My friend doesn’t want his Frosta, and is giving it to me, which is why the images in this review are all of a packaged figure. Where are the logistics here? Is this how design “translates the Four Horsemen’s sculpts into working action figures”. What needs translating, I ask? The joints are there, sculpted. The parts are correctly assembled. They paints were expertly selected. The sculpts that need translating already come with subtitles. LITERALLY NOTHING NEEDED TO BE ADJUSTED.

I understanding tooling joints so they work, or making Rattlor’s armor snap on properly without compromising the sculpt. I understand the decision of using all black plastic. I am a big boy. These things can be explained, whether we like it or not. But paint and part placement  doesn’t need translating. The arrogance at Mattel Design, who thinks they know what works best to “make them pop,” is demonstrating both a lack of understanding of the character and of the fan base.

This translates to Mattel not knowing what the customers want, even when explicitly told, repeatedly over many months. That only hurts sales. Since design seems to be the common denominator of all these issues, maybe Ruben Martinez should poke his head out of the office and read what Scott has been reading. Or perhaps Ruben should stick to designing another property the Collectors don’t care about. So far, his contributions as of late has only hurt the line… not strengthened it. Any chance we can get Terry Higuchi back?