Check Out The Full Rundown of Super7 SDCC Exclusives 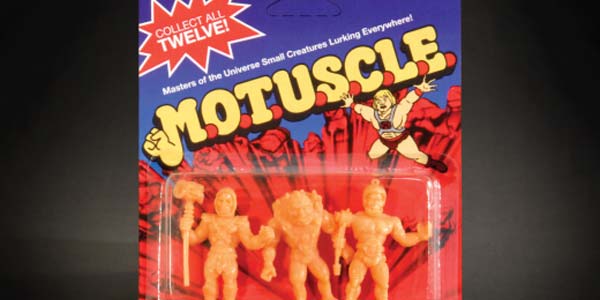 Man oh man, Super7 is really bringing their A-game to Comic Con this year!  What I love about these guys– aside from the mostly very cool ReAction brand– is the fun they pack into not only their products but also the ways to get them.  Last year saw blind bagged Alien ReAction figures with alternate deco, and each was packed in an oversized Alien egg.

This year, the name of the game is Masters of the Universe, and Super7 is offering a wide range of exclusives, some available at Comic Con and all at Super7’s MOTU themed pop up store, Skeletor’s Lair.  It’s there you will find the ReAction MOTU “prototype” figures (based on the fictional idea that, before becoming the line we all know today, Masters of the Universe was originally designed in the Kenner 3″ style), the totally must-own M.O.T.U.S.C.L.E. mini figures, and even a freaking Moss Man Chia Pet!

There’s a lot more coming from Super7, who are really pushing the boundaries on their ReAction line, bringing an art toy vibe to the nostalgia-driven brand.  I really dig what they’re doing here.

The Haunted House is three stories of fun and terror for your entire collection! Super7 spent almost an entire year developing this playset just like the vintage playsets of the 1970’s. Packed with over 60 individually painted panels and countless custom double-pass die-cuts on both sides of every board, the Haunted House may look simple, but this was the most complex toy Super7 has ever produced. Available exclusively from Super7, the Haunted House playset will be available for $75 each, limit one person. 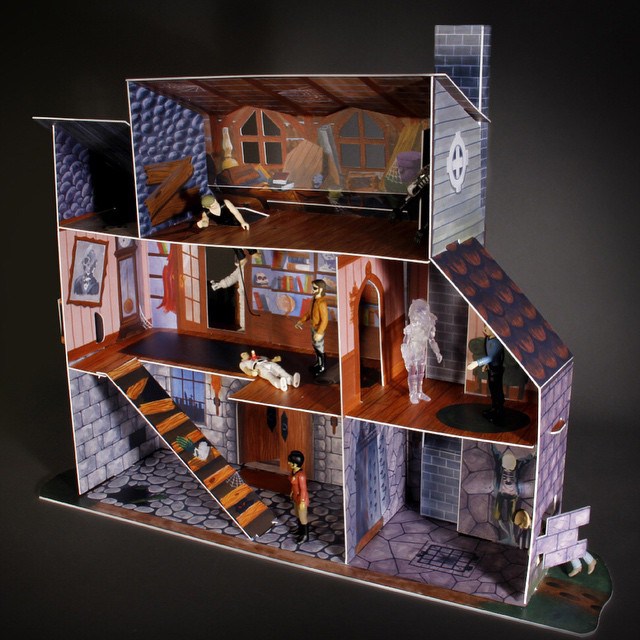 We’ve got plenty more coming your way from our ReAction line with Funko! Presenting our Pumpkin King Ornament Jack and Sally figures from the Nightmare Before Christmas! These Orange edition Jack Skellington and Sally figures comes packaged inside a blow-molded  Pumpkin King ornament. These are exclusive to the Super7 booth #4945 and are limit one of each per person for $20 each. 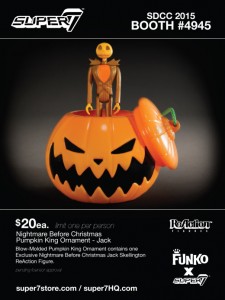 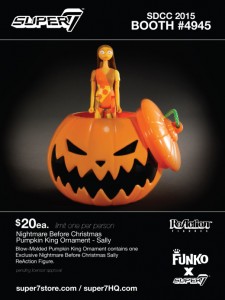 The Keshi (eraser) toy boom of 1970s Japan gave rise to the Kinnikuman Kinkeshi figures, known in the USA as M.U.S.C.L.E. (Millions of Unusual Small Creatures Lurking Everywhere)! Consisting of 236 small rubber figures, belts, fight rings and garbage containers, the M.U.S.C.L.E. line brought by Mattel into households everywhere introduced a unique figure format to children of the 1980s. At the same time, the Mattel-created titanic toy line Masters of the Universe was redefining the landscape of action figures! Amazingly, the paths of these two enormous entities never crossed….until now!

Super7 is proud to announce M.O.T.U.S.C.L.E., the debut of the perfect combination of two enormously epic toy lines of your childhood! Six Heroic Warriors and six Evil Warriors make up the initial line-up of rough and rowdy rubber renegades, available only from Super7 at San Diego Comic Con. Presented in blister-carded 3-packs for $6 each, the pink edition is available at the Super7 Booth #4945 and at the Skeletor’s Lair Pop-Up Shop (701 8th Ave). The all-black edition will be available only at Skeletor’s Lair, limit one per person, while supplies last. The Mattel booth will also be handing out Purple edition Skeletor M.O.T.U.S.C.L.E. figures. 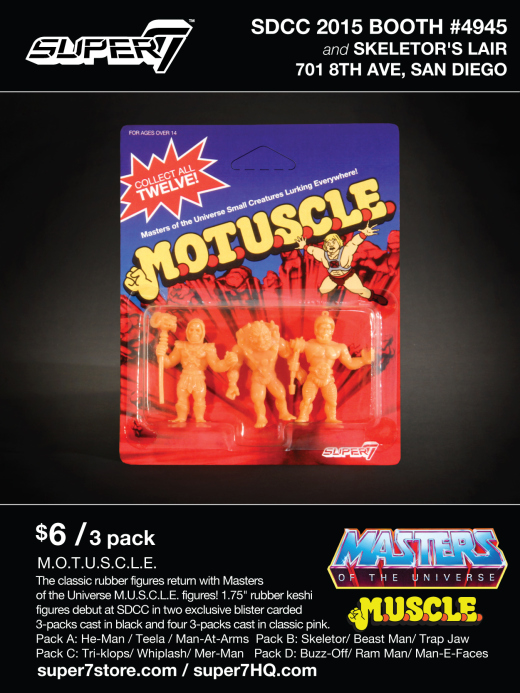 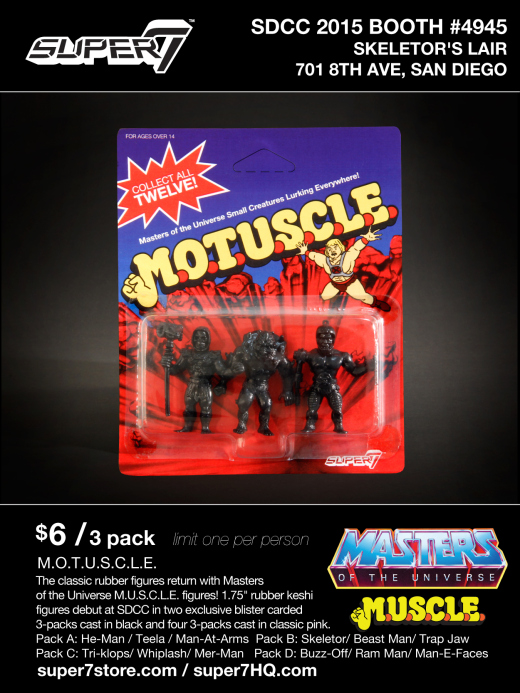 When you think of the He-Man and Masters of the Universe Action Figures from the 80’s, you instantly imagine a genre defining toy style packed with big muscles and even bigger playsets. But what if there was more to the story? What if a toy sculptor had started from a different point of view before changing the toy proportions to what we know today. What if those prototypes were found? What if? 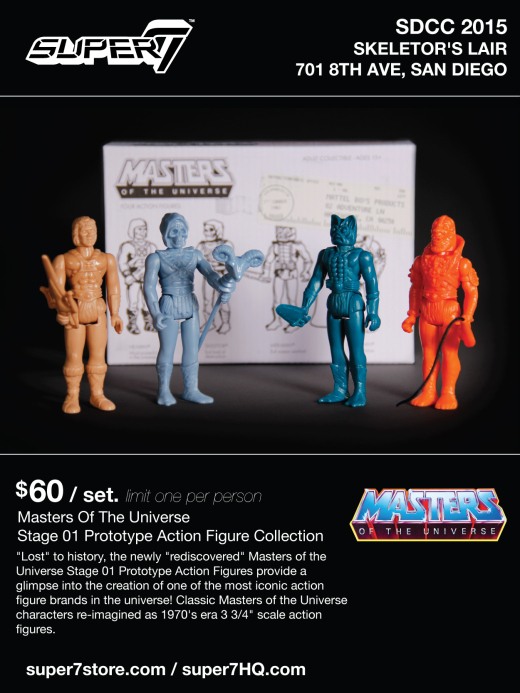 He-Man and Skeletor are coming at you large and in charge as a 12″ Action Figure! This limited edition release is cast in a unpainted mixed-color injected plastic parts to recreate the process of the first test shot figures created by the factory. Both He-Man and Skeletor come packaged on a blister card and are limited to one set per person at $95 each. They will be sold exclusively through Skeletor’s Lair at our San Diego location during SDCC. 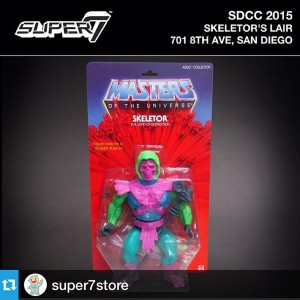 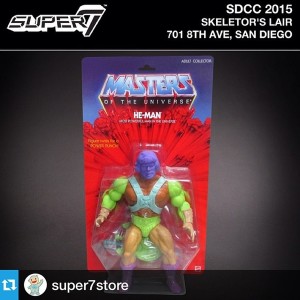 Amanda Visell has outdone herself with her handcrafted limited edition resin He-Man and Skeletor sculptures for the Skeletor’s Pop-Up shop, which is being held at our San Diego location! They will be available all weekend in limited quantities and will retail $100 each. Do not forget to get a hold of your Skeletoken before trying to enter the Lair (Instructions Here)! 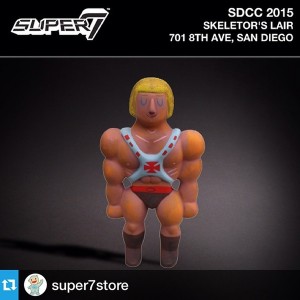 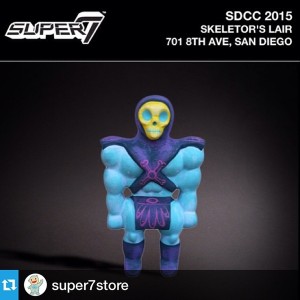 Ch-Ch-Ch-Moss Man, the pottery that grows! Come on down to Skeletor’s Lair, where you can grab your very own Moss Man Chia pet. Soak it in water, apply the seeds, and watch the Man of Moss bloom before your eyes (In 1-2 weeks). Limit one per person for $29.99 each. 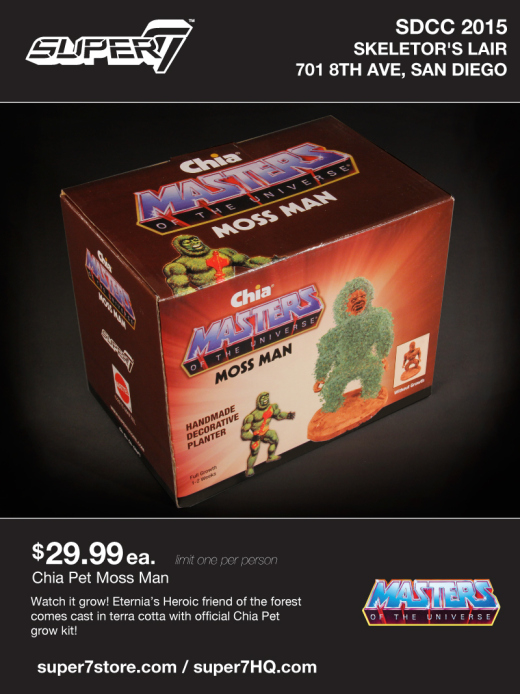 For all of you ReAction Figure fanatics! We will be releasing the Universal Monsters Haunted Crypt Set at our Booth #4945. The Injected plastic Mausoleum comes with a special set of SDCC Exclusive “Spirit Glow” Universal Monster figures from our ReAction line with Funko. The set includes Frankenstein, Creature from the Black Lagoon, The Mummy and Wolfman. The Haunted Crypt will retail $65 and is limited to one set per person. 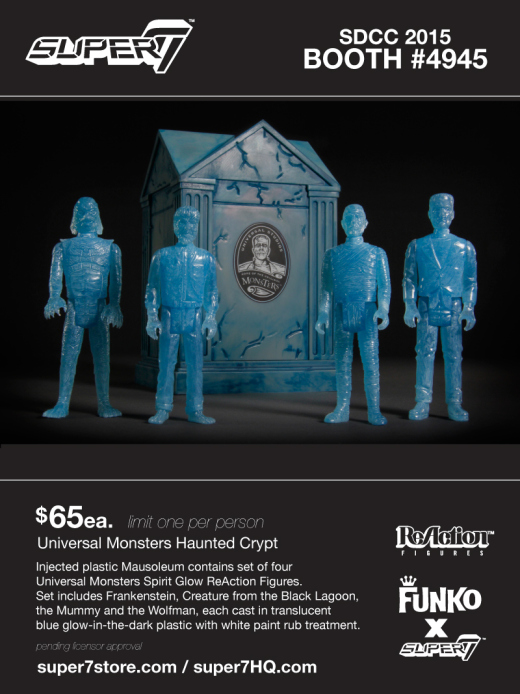 He-Man’s greatest nemesis Skeletor has taken over Super7 San Diego and has converted it into his very own lair. What he plans to do with it, we are uncertain. Possibly use the space to plan out his evil doings for the week or perhaps release some amazing He-Man and Masters of the Universe SDCC Exclusives! It is no easy task to gain access to Skeletor’s Lair. One must venture out to the Super7 Booth #4945 or the Mattel Booth #3029 to pick up a Skeletoken. You will then take this coin to 701 8th Avenue (Corner of 8th & G) and show it to us to gain entry into the Pop-Up Shop (you indeed get to keep it!).  Stay tuned for more information on what will be available at Skeletor’s Lair. 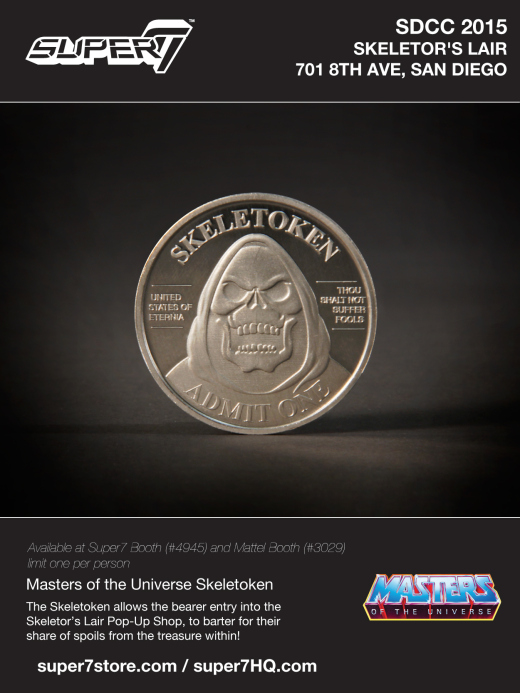 Secret-Base and Super7 are proud to present: Steve Caballero’s Cab Dragon! The Legendary Skater will soon be immortalized as a 4″ soft vinyl figure with removable Dragon mask to reveal, none other than Steve Cabalero. There will be a release/signing event taking place at the Super7 Booth #4945 on Saturday, July 11th at 2PM. The debut release will feature an unpainted grey vinyl, which will retail $50 each. 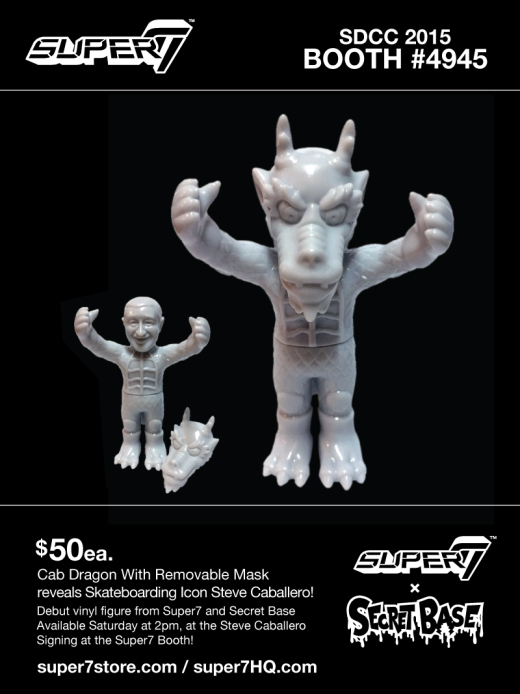 It’s that time of year folks! San Diego Comic-Con 2015 is just a couple weeks away and this year will be extra special, as we will be incorporating our new San Diego retail space in the festivities. Before we get into that, let’s get into what vinyl toys we will have available at our Booth #4945! 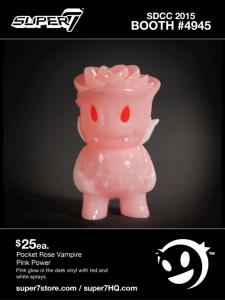 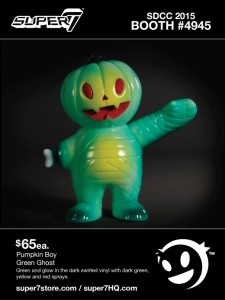 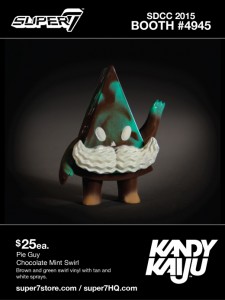 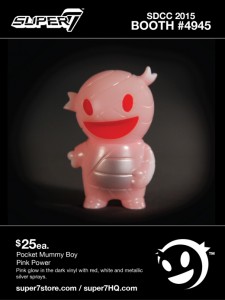 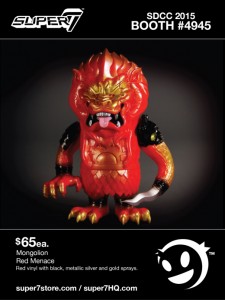 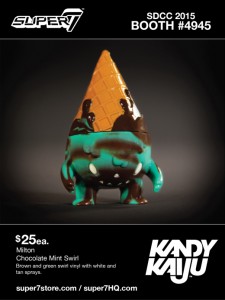 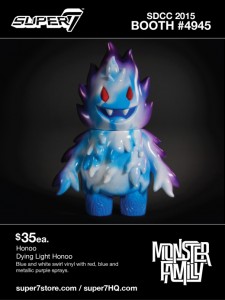 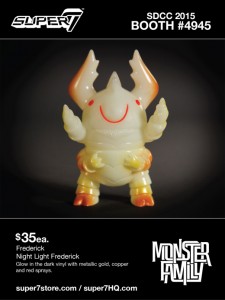 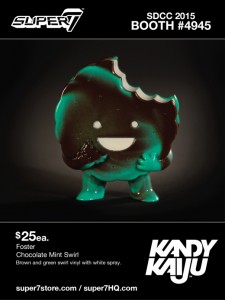