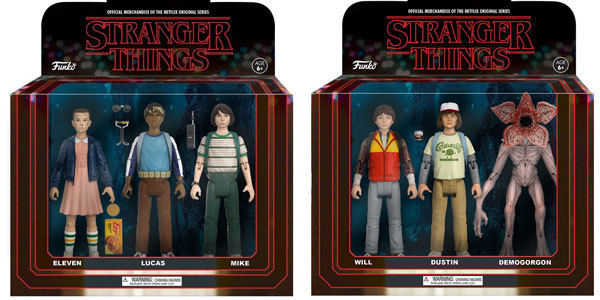 It’s been just about a year since we were all blown away by Stranger Things, the Duffer Brothers’ Amblin and Stephen King-fueled Netflix original series. And true to the rule of a 12 month production window for toys, we’re now seeing the flood of merchandise based on the show starting to materialize.

Funko already released their pretty cool line of Stranger Things Pops, and McFarlane Toys recently announce they were producing highly detailed 7″ action figures from the show, starting with Eleven and Sheriff Hopper.  And now, Funko is back on deck, revealing two three-packs of retro style 3.75″ action figures, which assemble the entire core cast of kids at the center of Season One, along with the beastly Demogorgon.

The retro aesthetic totally lends itself to Stranger Things, for sure… and I kind of like Funko’s designs for the kids.  But man, that horribly out-of-scale Demogorgon kind of sinks this line for me.  I loved the show, and cannot wait for Season Two to drop this October… but this property has me conflicted.  Funko’s line is appealing in that it delivers the entire group of kids (even Will). But while Hopper seems like a head scratching first choice, McFarlane’s Eleven is promising to be THE definitive Stranger Things toy, in my opinion.  Highly detailed, fully poseable, and packed with a removable wig? How do you top that?

While I debate the future of my Stranger Things collectible buying habits, you can read more about Funko’s offerings, and decide for yourself how you want to rep this awesome series on your shelves. 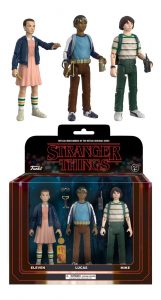 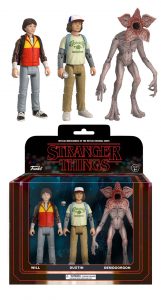 From Netflix’s Original Series Stranger Things, some of your favorite characters from Hawkins, Indiana are joining the Funko Action Figure line!

Action Figures are arriving as 3-packs. Each figure stands 3 ¾ tall and are fully articulated.

Pack 1 includes Lucas, Mike, and Eleven – with her signature Eggo.

In addition, pack 2 features Will, Dustin, and Demogorgon.

Add both 3-packs to your collection this Summer!