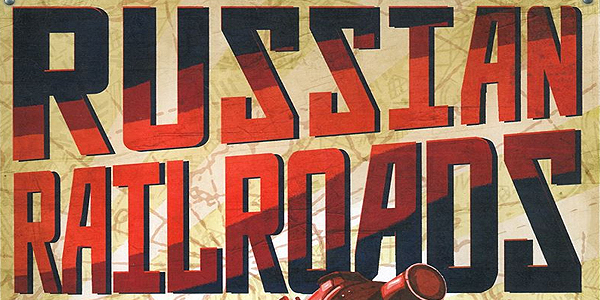 Originally released by Hans im Glück and now published domestically by Z-Man Games, Russian Railroadsputs players in the roles of Railroad Barons attempting to amass wealth by building rail lines and upgrading their fleet of locomotives.  It’s a medium-complexity worker placement game with high-quality components and a rather interesting rule set, making for one of the more unique and entertaining experience. 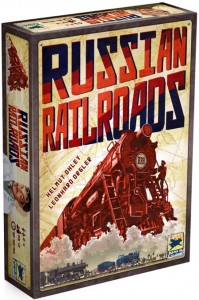 Two to four players are able to compete in building the Trans-Siberian railroad as well as two other lines, each offering their own benefits and rewards when constructed.  These lines are all displayed on the players’ individual boards.  Much like games such as Agricola, a players progress plays out on their own board, with a main, shared board in the center of the play area where a player’s workers can be deployed in exchange for actions such as advancing railways, hiring engineers, or obtaining personal locomotives and factories.  Players are able to move their colored wooden rails, each worth an ascending amount of points, one after the other down the tracks represented on their boards by using the actions on the main board.  Not only will this affect the scoring at the end of each of seven rounds, but there are numerous areas that will grant bonuses for building onto or past them with rails of a specific color.  Of course, varying amounts of progress will need to be made to even earn the right to place different rails colors and, even then, players may only score up to the point that their locomotives can actually travel.  Each player starts the game with one train labeled with the number “1”, meaning it can only travel one space and cannot grant certain bonuses or enable scoring past the first space on its track.  As more are obtained though, there is a huge potential for enormous scoring phases.  In fact, I don’t think I’ve ever played a game that throws this many points at you all at once.  Scores of over 100 victory points in one round are not unheard of later in the game, effectively lapping the entire score track all at once.

As worker placement-style games have grown much in popularity, there’s a good chance you’re already familiar with the mechanics (placing workers to take actions while simultaneously blocking spaces and denying those actions to others).  Russian Railroads shares these basics but streamlines the experience by cutting out a lot of the fat.  Most importantly, there are no resources to collect/hoard in order to spend later – only workers and rubles, which basically also function as workers.  Two spaces on the board, most notably the area which lets you hire an engineer, require the use of a ruble, but that is about as deep as the game’s economy gets.  As stated previously, each player is given identical boards depicting the Trans-Siberian, Moscow-St. Petersburg and Moscow-Kiev railroads.  The right side of the board directs players to place their engineers, the left side is where locomotives would be placed (at the beginning of a track), and the bottom features notches that can be filled by placing factories.  Each player starts the game with six workers, one ruble, and a marker to track their industry progress, along with seven unique bonus tokens that may be earned later in the game.  By reaching aforementioned goals on their railways, players can earn two additional workers as well as use of the bonus tokens and, of course, lots of points.  It’s also worth mentioning that the workers are represented by colored wooden meeples, sculpted to look like they’re wearing Russian Ushankas.

Every player starts with a black rail marker for each track.  By taking the appropriate actions to nudge a number of these markers forward, players can move the markers that many spaces along the track(s) of their choosing.  Once they’ve progressed far enough on the Trans-Siberian track, grey rail pieces become accessible and can be placed & moved using the corresponding actions, but never onto or past the black markers that preceded them.  The same goes for the three other colors that can be obtained.  Each scores higher and higher points for the track point it occupies and each space behind it, but can never advance further than the color before it.  But again, a player can only score the track as far as its locomotive can reach.  Each player already will have a “1” train in their possession while the others, labeled “2” through “9” form eight stacks in a common area.  Players who take the action to take a train (and/or a factory) must take them from the lost numerical stack.  Factories are placed in the left most position designated for them while trains are placed adjacent to the track of your choice, replacing lower ranked trains, which can then be moved elsewhere or return to the common area as a selectable factory. 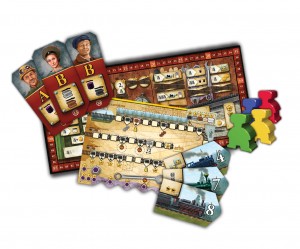 If players decide to focus more heavily on industry as opposed to rail work, the factories that fit into the notched spaces are required for continued progress up the industry track.  Not only do factories grant powerful abilities when they are landed on with the purple industry marker, the track can potentially score loads of points at the end of each round.  The mechanics for both the industry and rail tracks are quite clever and guarantee that no one player can expand too quickly.  As with most worker-placement style games, you’ll get to the end wishing you just had a couple more turns in order to see your plans fully-realized.  Still, Russian Railroads still manages to present a wealth of options to players, making it slightly more forgiving than some others in the genre.   The two actions that are almost guaranteed to happen at the beginning of each round are the hiring of an engineer for one ruble and the withdraw of two rubles from the stock.  Rubles are an extremely precious commodity as they can always be used in place of a worker and are required for two actions on the board – one of which being the engineer space.  It’s worth noting that the player who has hired the most engineer gets 40 points at the end of the game.  For this reason, players will often take actions to guarantee themselves the first or second player spot on the following round, in order to get first crack at those two precious commodities.

The other neat thing about the engineers is that they act as a game clock.  Seven of them are randomly drawn (so each game plays a bit differently) and disappear during each round, so it’s easy to see how many turns remain.  This is important when trying to think ahead and strategize exactly how you’ll reach milestones on your railroads or industry track, especially the “?” spaces which grant insanely powerful bonuses.  All in all, it’s a solid, thinky, and very fun game that lasts a satisfying thirty minutes or so per player.  The points towards the end begin to escalate so rapidly that it can be difficult to determine who may take the win and I enjoy that – you really need to keep tabs on the other players’ scores and how they’re progressing to determine what your next move should be.  The components are of great quality and I thought the rule book was concise and left little room for questions.  If you’re a fan of tight Eurogames or even a railroad enthusiast, Russian Railroads is compelling and thematic enough to scratch your itch.