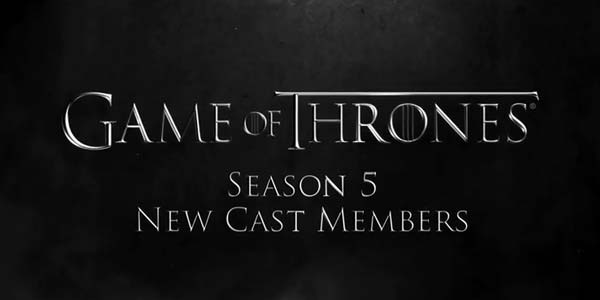 One of the things that comes with a show packing a body count as high as Game of Thrones is that each season typically sees a lot of new faces to take the place of the dead.  But at this year’s Comic Con panel, they really went all out, with a video featuring nine new cast members joining the series.

Here is a rundown of who’s playing who in the new season:

Nell Tiger Free as Myrcella Baratheon, the eldest child of Cersei Lannister who was sent packing to Dorne early on in the series.

Jessica Henwick as Nymeria Sand, one of Oberyn’s bastard daughters known as the Sand Snakes.

Rosabell Laurenti Sellers as Tyene Sand, another daughter of Oberyn’s.

Keisha Castle-Hughes as Obara Sand, eldest of the Sand Snakes.

Here’s the video, which HBO has kindly shared on the interwebs after the surprisingly newsworthy Game of Thrones panel ended.  Having not read the books (I know, sorry) I don’t know how these actors measure up compared to the characters’ on-page appearance, but Jonathan Pryce is always wonderful, and the Sand Snakes promise to be some cool new badasses to look forward to.

Judging by where these characters are coming from, I’d also venture a guess we’ll be spending quite a bit of time across the sea in the coming season.  I’m looking forward to it… How about you?