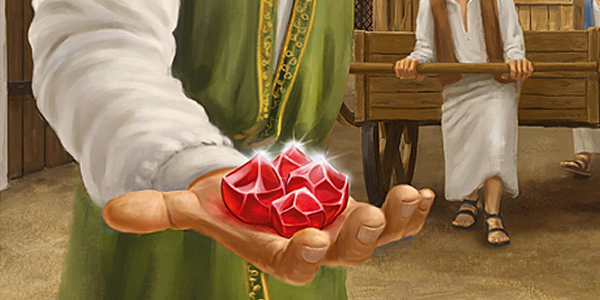 Istanbul, designed by Rüdiger Dorn, has just been published domestically through Alderac Entertainment Group and is currently nominated for Germany’s coveted Kennerspiel des Jahres award.  Boasting some interesting mechanics that lead to a solid amount of decision making all while players race to collect five rubies, it’s little wonder that it’s being called one of the best tabletop games of the year. 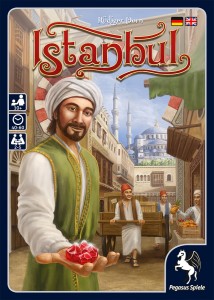 Instead of sporting a standard, folding game board, Instabul’s play area is made up of 16 large cardboard tiles, arranged in a 4×4 grid, each of which depicts a different location.  Each of up to five players receive a stack of wooden discs which represent their merchant, a slightly thicker disc with an illustrated sticker affixed to it, which always sits on top of the other four discs, which are your “assistants”.  Players take turns moving their stacks (the merchant and any assistants currently underneath it) either one or two spaces in order to use the actions of the location tile they land on.  When a player moves to a location that doesn’t already contain one of their assistants, they remove an assistant from their stack, dropping it off at the location, and then they are able to take the unique action that the location provides.  When a player moves to a location that contains an assistant that they previously dropped off, they add it to the bottom of the stack, and then are also able to take the location’s action.  If a merchant moves on its own however, with no assistants left in the stack to support it and lands in a space that doesn’t already contain any assistants of their color, then the player cannot take any action.

This means that players will need to try and plot out a course that allows them to easily backtrack to certain locations in order to pick up their previously dropped off assistants in order to keep taking actions.  Some of these actions involve acquiring bonus cards, filling your cart with goods, selling goods from your cart for either coin or rubies, or upgrading the cart itself.  Each player has a personal player cart which acts as their wheelbarrow and is used to carry their goods.  When you gain goods of a certain type, you move the corresponding wooden cube to the right depending on how many of that good you’ve taken.  By upgrading your cart, you insert another row of goods into one of three empty slots, allowing you to effectively carry one extra unit of each good.  The inventory management is made elegant and simple with this mechanic, requiring only four small blocks and an upgradable card to keep track of everything. 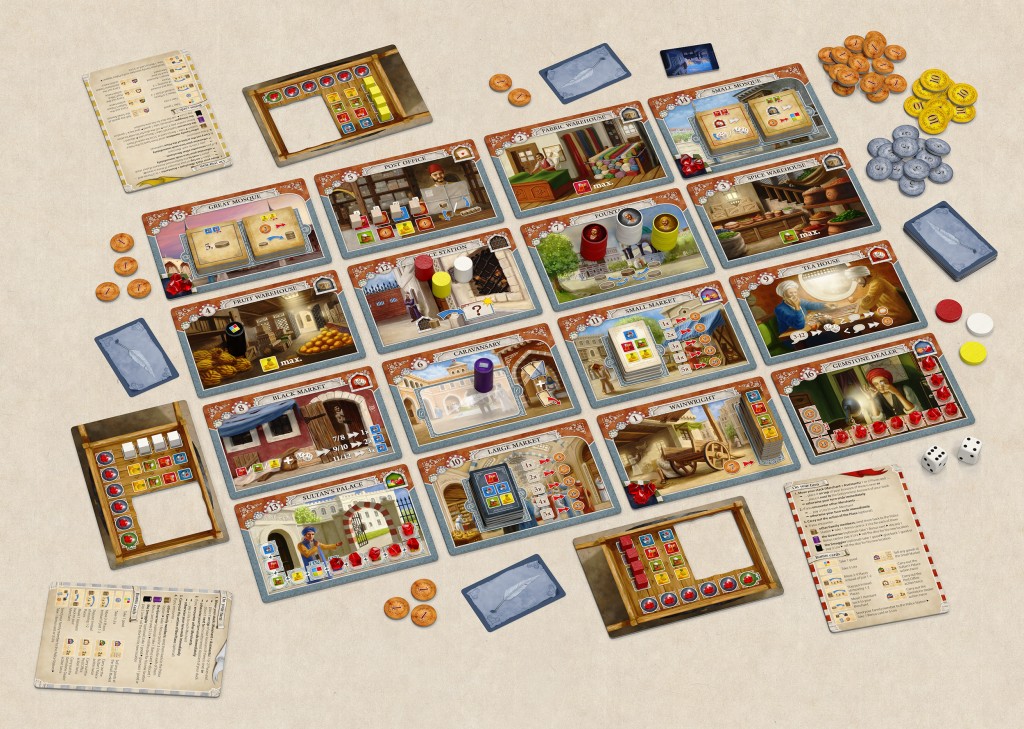 The beauty of the game lies in its dynamic play environment as many locations will become increasingly difficult to use as the game progresses.  What’s more, other merchants occupying a sought-after space can put a greater burden on using that location’s action.  Many of the locations that offer rubies in exchange to things (such as trading goods or outright paying money for them) will require more items or capital for each ruby that is taken.  The reason other players’ merchants are best avoided is because, if you end your turn in a location already occupied by one, you must pay that player two coins or your turn ends immediately.  To circumvent this, there is a “jail” location that houses one of each player’s “family member” (a tall wooden cylinder) at the start of the game.  Using this location’s action will allow a player to spring their family member out of jail and send them to any location they choose, ignoring all additional costs from merchants who are there.  It’s a great way to use a location immediately that would normally take several turns to travel to but it also is rewarding to your opponents.  A merchant who lands in a spot occupied by another player’s family member can immediately choose to send it back to jail for a reward of either money or a bonus card.  There are also “governor” and “smuggler” tokens that roam the board (their positions are dictated by die rolls) which offer similar rewards as well.

The game ends when one player has 5 rubies (or 6 in a 2-player game) but players finish the current round so everyone has an equal number of turns, allowing for several people to tie in some instances.  If, at the end of the round, only one player has five rubies, they win.  If more than one player has met this condition, there are several tie-breakers in place to determine the winner.  I actually had a blast playing Istanbul — the rules were straightforward and simple enough that a group can sit down, read through them for the first time, and be read to play within a few minutes.  It plays in about an hour or so with five players and, while it’s difficult to form long-term strategies due to the constantly changing nature of the board and other players’ locations, there is plenty of short-term planning to be done on each turn that can pay off in a big way.  It has just right amount of player interaction as well, where there is no direct conflict but many opportunities to alter a location before an opponent can reach it, adding a good amount of tension to the experience. 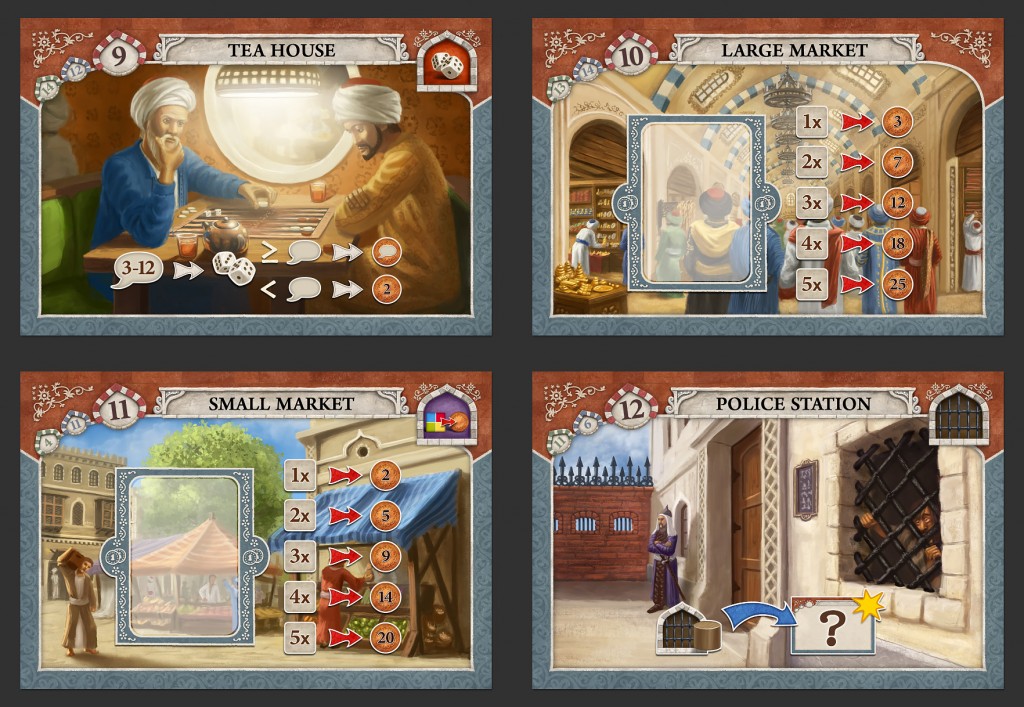 I’m also a fan of the way the game board consists of tiles which can be randomly arranged eachtime you play, posing totally new challenges.  There are pre-set layouts to follow in the rule book which work well, especially for your first playthrough, but the variety in all the different configurations to be had from randomly laying the sixteen tiles is excellent.  The artwork is quite nice as each location features it’s own painted scene along with symbols summarizing the action it provides, making it easily distinguishable and easy to navigate.  The components used are also top-notch, with thick, sturdy cardboard used for the locations and players’ wheelbarrows and standard, painted wooden discs for the player pieces.  The stickers that designate the merchant, governor, and smuggler pieces do not come pre-affixed but look great once they are in place.  The rich gameplay and dense decision-making it offers made it a shoe-in for  the Kennerspiel (Germany’s Complex Board Game of the Year award) nomination where it’s up against fantastic titles like Russian Railroads and Amerigo.  Regardless of whether it lands the award though, Istanbul certainly demands to be checked out by any tabletop gaming enthusiast — it’s absolutely one of the best titles I’ve sat dow with this year.  Also, it’s impossible to play without humming They Might Be Giants’ classic tune in your head, which is always a good thing.