Not All Geeks Are The Same 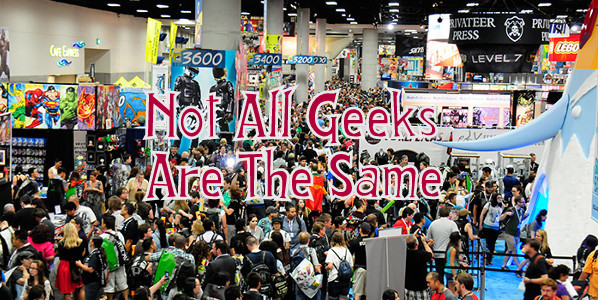 So many different things in the world of geek, it’s so hard to like all of them.

I was speaking to a friend of mine and the conversation went like this:

Me: Nah. Not really my thing.

Friend: Really? I thought you liked all that comic stuff?

Seriously? So just because I read comic books that means I should like everything that’s considered geeky?

I’ve talked before about my love of comics and that will always be a big passion of mine. Most of the comics I like happen to be of the spandex persuasion. Otherwise known as super-heroes. There other types of comics that I do like as well that deal with everyday life or history.

This one size fit all with us geeks is ridiculous. Yes, there are a lot of things that are geek culture I love, but there are some things I don’t like. I’ve never been a fan of the original Star Trek TV series, and I hate Doctor Who. Shocking isn’t it. Does this mean I should lose my geek cred? No, because they don’t appeal to me.

If you say you’re a sports fan, then can I assume that besides liking football, you’d stop everything to watch curling or bowling on ESPN? You don’t? Then should I take away your sports fan cred? No! It’s the same principal.

Every culture has subcultures, upon subcultures. You can drill in down to it’s basic core. It’s not one size fits all situation.

But I can understand why people naturally assume these things when it comes to geek culture. While it is gaining in popularity, there are still a lot of unknowns to the general public.

Another thing that doesn’t help the geek’s situation is a show like The Big Bang Theory. I have a lot of geek friends and none of them are like that. It’s seriously stereotyping us, and quite honestly don’t appreciate it.

I guess what I’m trying to say is don’t try to put me in a box, but I’ll just escape from it.

Even in the geek world, I’m a square peg in a round hole.