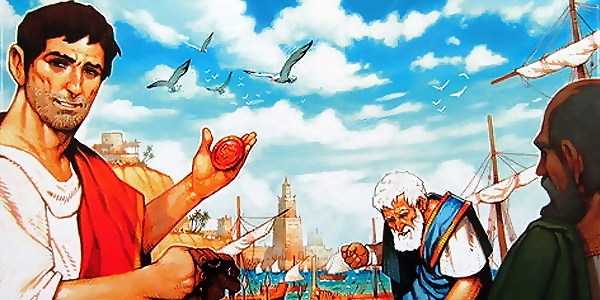 French publisher Hurrican, partnered with Asmodee, introduced Augustus to domestic audiences at GenCon 2013, now re-titled as Rise of Augustus (for some reason).  Nominated as the 2013 Spiel des Jahres “Game of the Year,” it got quite a bit of buzz – which is especially surprising considering what a light, luck-based game it appeared to be.  As it turns out though, Augustus is easily one of the most enjoyable filler titles on the market. 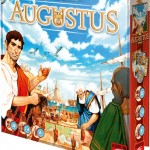 Thematically speaking, the game is set in ancient Rome as players deploy their legions to conquer territories and win the influence of senators.  Theme isn’t really its strong suit however and, for all intents and purposes, Augustus shares most of its core mechanics with Bingo.  Make no mistake though, it offers an experience that’s extremely entertaining and far more aesthetically pleasing than staring at a grid of numbered boxes.  Each player begins the game with seven “legion” units (represented by red soldier meeples) and six objective cards, of which they can retain three and discard the rest.  The chosen objective cards are then laid out in front of their owners so everyone can see each other’s progress.  These cards, which are square-shaped, make minimal use of text, instead featuring lavish illustrations and symbols to convey their requirements.  The left side of the cards feature a vertical row of symbols indicating what you need to complete that objective, the right side shows the reward (if any) granted for its completion and the victory points the card is worth at the end of the game, and the bottom simply states the title of the objective card and its numerical order in the deck. 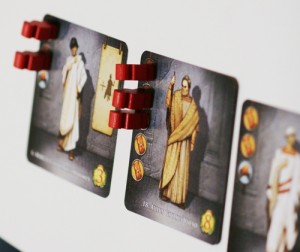 The first player receives a cloth bag filled with tokens illustrated with different denominations of the symbols shown on the left side of objective cards – specifically six crossed swords, five shields, four chariots, three catapults, two gold emblems, and one dagger.  In addition, there are two “wild” tokens that are decorated with every symbol surrounding a star.  One by one, these tokens are pulled blindly from the bag and players are able to place one of their legion markers onto a matching symbol on any of their incomplete objectives.  This legion can either be from the player’s supply or an already placed legion can be moved to the new symbol from a symbol it had been previously placed on.  If a wild is drawn, players can place on any symbol they wish, all drawn tokens are returned to the bag, and the bag is passed clockwise to the next player who will become the new person to draw tiles.  Once every symbol on an objective card is covered by a player’s legions, they announce that they’ve completed an objective (the rules ask that you exclaim “Ave Caesar!” although any indication of your triumph will work just fine) and the completed card is placed slightly off to the side.  The victory points listed on that card will be scored at the end of play while any rewards it may give are claimed immediately.  These may grant the ability to immediately place two legions on specific symbols, remove legions from an opponent’s incomplete objective, or even to add more legion meeples to your supply.  If multiple players complete objectives at once, they resolve them in the numerical order of the cards they’ve filled, then all players who have successfully finished an objective draw a new one from the common supply of five, replacing the one they chose with a new one from a face-down deck. 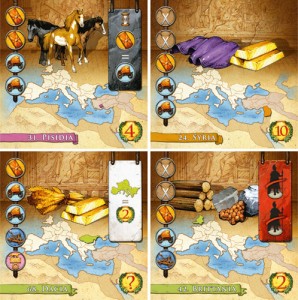 Any player(s) who have completed their seventh objective trigger the end of the game and all players will add up their victory points, with the winner being the person who has the highest score.  Based on just the mechanic described above, it would seem that Rise of Augustus is a game based entirely on luck, but there is an interesting achievement-based system in play which injects the title with some subtle strategic elements that may require players to take some serious risks.  Placed next to the objective draw-deck are a number of cardboard tokens that feature three types of awards – those which can be obtained only once per game, those that can be earned multiple times, and those which may change hands as different players complete the requirement.  To explain further, the first set of five awards tokens illustrate a number of boxes (two to six – representing completed objectives) with a number of victory points.  These awards may be claimed only once and only as soon as the player is eligible.  For example, as soon as a player completes their second objective, they may grab the corresponding tile which is worth two points at the end.  If they do this however, they will not be able to take any further awards for completing three or more objectives later.  Conversely, if a player waits to try and snag the ten point award for finishing your sixth objective and another player beats them to the punch, they may not go back and claim tiles that they were previously eligible for, possibly leaving them with nothing.  There are also awards for completing several objectives of the same type or color, but more than one award of this type may be obtained as long as the player fulfills the requirements.  Lastly there are two special award tiles each worth five points – one featuring wheat and the other with gold bars.  These are passed to the player who has the most completed objectives that feature either of these items on their cards’ illustrations or the player that most recently tied for having the most. In some games these will be passed around a few times, but only the last player holding them benefits from the score.  This may potentially make some players hold off on completing certain objectives to maximize their chances of getting it late in the game, but then run the risk of being unable to get the symbols needed to finish the objective in question.

The game plays in about twenty minutes, which makes it a perfect filler title, offering fun luck-based placement rules complimented by some clever mechanics involving light strategy.  The artwork is elegant and beautiful throughout and, while the Roman theme is tacked on and doesn’t affect the gameplay in the least, it works as well as it could in this scenario.  Really the only curious decision here is a manufacturing one: the box housing the components could easily be about 80% smaller.  There is no board or bulky items included, so the somewhat large box only holds a small deck of square cards, a baggie of legion meeples, and cardboard tokens.  These could have easily been included in a tiny, easy-to-transport, space-saving box, but ultimately it’s a very small complaint that has nothing to do with enjoyment of the game itself.  The rulebook is clear and concise, giving an excellent run-down of the game setup and a reference of the reward symbols on every card.  It’s helpful to have that section out on the table when playing with new players and the text-less explanations can sometimes be confusing on your first game.  For a quick game that plays up to six, Rise of Augustus is brilliantly executed and perfect for filler or for players looking for some lighter fare.