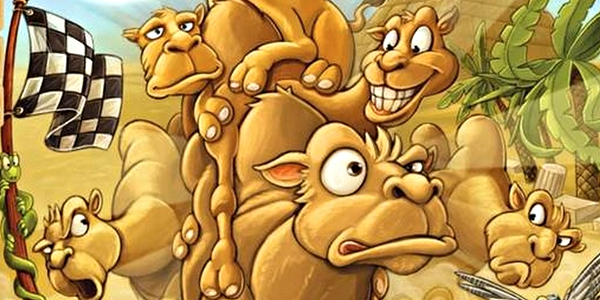 Z-Man Games had a limited amount of this year’s Spiel des Jahres winner available domestically at GenCon ahead of its wide release later this year.  The coveted award guarantees plenty of exposure for the title and we couldn’t wait for the chance to try it out. 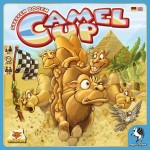 Camel Up, originally published by Eggertspiele, is a fast-paced and surprisingly simple game that plays up to a whopping eight players.  During the course of one playthrough, which will typically last about 30-45 minutes, players will back one or more camels to win each of several legs of a race, as well as bet on which camels will end the entire race in either the first or last place position.  Therefore, players don’t actually play as the camels themselves as I would have initially guessed – instead, every player receives five cards, each with a colored face depicting one of the five camels in play, and all showing the avatar of the chosen player’s character.  Players also receive three coins (Egyptian Pounds) from the bank and one square, double-sided tile showing an oasis on one side and a mirage on the other.  In other words, player components are refreshingly minimal and the board set up is a breeze. For each camel in play, there are three tiles stacked in a specific order, featuring that unit’s color – the topmost tile features an illustration of 5 Egyptian Pounds, the middle one with 3, and the bottommost with 2.  The flashiest component, a giant pyramid-shaped dice dispenser, facilitates one of the game’s most fun and interesting mechanics and is accompanied by a stack of five identical pyramid tiles.  After the starting dice roll that dictates where each camel begins on the race track, each of the five dice (again color-coded to each of the camels) is placed into the pyramid.

The now game begins and each player, starting with the youngest and then proceeding clockwise, can take any one of four actions.  First, you can decide to claim one pyramid tile, which guarantees one Egyptian Pound income at the end of the leg and allows the player to immediately use the pyramid to move a camel unit.  I say camel unit because you may be moving more than one camel at the same time if they are stacked.  As the name implies, the wooden camel pieces fit snuggly into each other and allow a camel that ends its movement in the same space as another camel to immediately hop on top of it.  The topmost camel is considered to be ahead of those below it.  If a camel would move and has any other camels resting on it, they would all move together.  By shaking the pyramid, placing it upside-down, firmly against the table surface, and pressing the level inwards, one colored die is released showing a number between one and three.  The corresponding camel would move that many places and the die would stay out until the end of the leg.  Each leg ends once all the dice come out (and thus all camels have moved) and the entire game ends once one camel reaches the finish line. 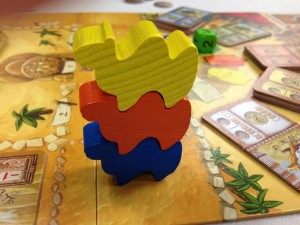 Next, a player may place their desert tile on a future space of the racetrack, provided it is not adjacent to any desert tiles that have already been placed.  These serve a couple interesting purposes.  If a tile is placed with the mirage-side up and a camel would end their turn on it, they are sent back one space and are put below any camel(s) occupying the space behind them.  If a camel ends its movement on a tile that is showing its oasis side, they would be moved forward an extra space, landing on top of any camel(s) ahead of them.  In either case, the owner of the desert tile would immediately gain one Egyptian Pound whenever a camel lands on their tile.

Players can also choose to take a betting tile, meaning they would take the highest tile on the aforementioned stacks corresponding to each camel.  The first player that backs any camel in this fashion would take the tile marked with 5 Egyptian Pounds, leaving the “3” and “2” below it.  These tiles are the key to amassing large sums of money during the game since, if you’ve backed the camel that’s in the lead at the end of any leg of the race, you gain the amount of Pounds listed on those tiles.  If you have any tiles backing the camel that’s in second place, you would gain only one Pound for each of them.  Any other tiles in your possession would cause you to lose one Pound each (although you can’t go below zero).  All tiles get returned to their respective stacks once each leg ends. 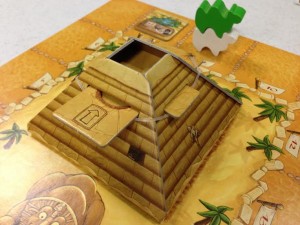 Lastly, players can take one of their five cards and place it face down in the space predicting the overall winner or overall loser of the whole race.  More than one card can be placed into either stack during the course of the game and the entire stack is flipped face up (showing the earliest laid cards first) once one camel crosses the finish line and ends the race.  Any player you predicted incorrectly loses one Pound for each wrong guess in either pile.  The first player who guessed correctly, however, gets 8 Egyptian Pounds.  The next gets 5, then 3, then 2, and anyone after that would gain only 1.  At the end of the final leg scoring and scoring of the overall first and last place camels, the player with the most money winds the game.

Camel Up features extremely simple mechanics and a group can jump into a game with ease, learning the rules and basic strategy in minutes.  With the order and distance each camel will move left up to random dice reveals, there is a large element of luck involved, but the game really centers around educated decision- 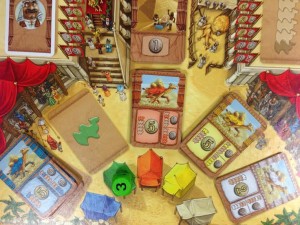 making, action-denial to opponents, and simply playing the odds.  Players will need to weigh their options of backing a camel early in the round to try and ensure they can net five Pounds (or at least deny it to any opponent) or if they should take a pyramid tile, netting them only one Pound but moving a camel and potentially setting up the next player with a much better idea of which camel may end up in the lead.  Furthermore, when the round is close to ending, players must decide if they wish to place further bets or move a camel, pushing the leg closer to its conclusion and potentially robbing others of a final action for that leg.

Luckily, all the actions feel quite balanced with safe and risky feats earning appropriately minor and high rewards.  Placing a desert tile, for example, may earn nothing but, assuming multiple camels step on it in one turn, can be quite profitable – just not quite as profitable as a winning bet tile (which of course could also result in its owner losing money for a bad guess).  The core mechanic of the stacking camels is clever and really keeps everyone guessing who will end the race in the lead.  Since each camel can move between 1-3 spaces and only transport the ones on top of them, you’ll find that the order switches up often, with units previously 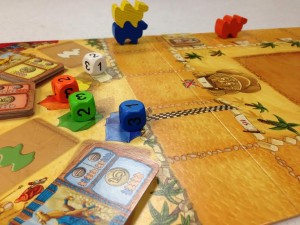 trailing behind suddenly rolling high and ending up on top of the first stack.  The experience can be pretty exciting and was more entertaining than I would have given it credit for on first glance.  The playtime is quick and the player turns are extremely short, leading to very little downtime between actions.  For this reason alone, it will be very attractive to the casual crowd and children but even experienced gamers will find little to dislike here.  Even with its random elements and some luck-based mechanics, Camel Up is a blast to play through.  With whimsical artwork and solid components, Camel Up is well-deserving of its Spiel des Jahres victory – a light game of risk/betting that accommodates eight players and can be set-up, played, and broken down in under an hour.  Keep an eye out for this one to start hitting local game shop shelves soon.