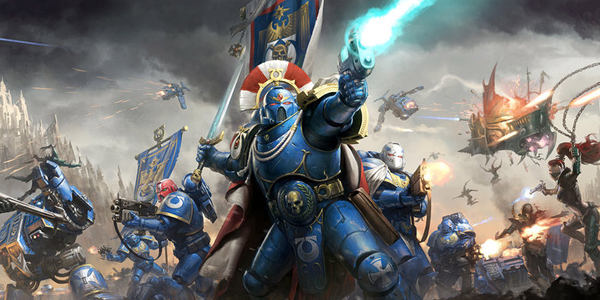 One of the most anticipated releases primed to debut at this year’s GenCon was Fantasy Flight Games’ newest entry into their line of “living card games” – Warhammer 40k: Conquest.  We delve into the components, the gameplay, and most importantly, what makes Conquest stand out in an overcrowded card game market. 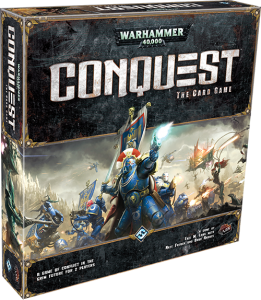 First thing you’ll notice when seeing the game box is that it’s significantly smaller than the core set boxes for all Fantasy Flight’s prior LCGs – nearly the size of a deluxe expansion actually.  This could be a bit of an issue for some who use the game box to store their collections as, after a few expansion packs hit, there won’t be enough room to fit everything.  It also means that cards can’t be stored on their sides, forcing you to lay them down flat in stacks.  It’s a curious change but game store owners will surely be enjoying the smaller profile taking up less shelf space.  Each box contains 222 faction cards, ten Planet cards, two reference cards, and forty token cards, which are called upon by certain card effects and are physically smaller in size.  There are also 2 Command Dials that require assembly, an Initiative Token, and a whole bunch of resource and damage tokens.

The components themselves are high-quality, as you’d expect from an FFG product, with thick cardboard, hefty cardstock, and fantastic artwork throughout.  Fantasy Flight has been publishing card games of this type for a while now and the level of polish and craftsmanship in their products definitely reflects it.  Each card in the set is busy with information while maintaining a very clean and easy-to-read design.  Much like the many identities in Netrunner, Conquest’s Warlord cards have a distinct full-art aesthetic and are the only double-sided cards in the game.  The “Hale” side features a portrait of the warlord character, its special ability, and its attack/health values.  The opposite side, referred to as the “Bloodied” side, is blood-spattered with weaker stats to reflect a battered warlord.  With seven races included in the base-set, there is a great deal of variety, but it also severely limits the size of each faction’s starting card pool.  The recommended decks listed in the instruction booklet consist of only 35 cards and, due to deck-building restrictions; it’s barely possible to construct a tournament-legal fifty-card deck using just one box.  Like nearly all of the LCGs produced to date, three core boxes are needed to be competitive, here more so than in any of the previous games.  It is legal to run up to three of any card but only a handful in the starter set have more than one copy.  It’s a bit frustrating from a consumer’s point-of-view and leads to a much larger investment than it initially appears. 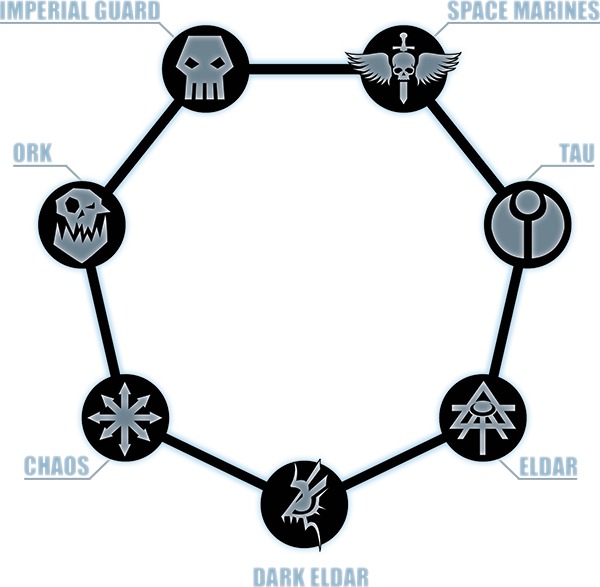 The deck-building element here is rather interesting, thankfully.  Every LCG has some way to incorporate cards from outside your main faction into your deck, whether it’s an additional gold cost (Game of Thrones), resource matching (Star Wars), or spending influence (Netrunner).  In Conquest, there is an alignment wheel lined with each of the races (Tau, Space Marines, Orks, Eldar, Dark Eldar, Chaos, and Astra Militarum).  Each race has a Warlord with eight signature unit attached to it – these units must be included in any deck using that warlord.  I’m personally not a fan of having mandatory cards forced into a deck, but it’s still far less restrictive than the pod-based model used in the Star Wars LCG and building around them can make for some interesting strategy in the future.  Aside from these mandatory units, players can include up to three copies of any cards from within their faction as well as three copies of any non-signature and non-loyal cards from one faction that is adjacent to your race on the alignment wheel.  Loyal cards are marked with a small yellow circle and can only be used in a deck of their own faction.  It’s simple enough and, when the card pool grows a bit, I’m really looking forward to delving into building some quality decks. 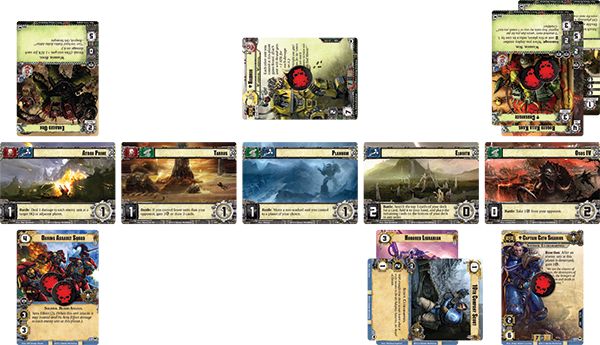 Essentially, Conquest is a head-to-head game that plays out in seven turns or less where players vie for control of planets and the resources they provide.  Through the tactical deployment of armies and support cards, players will try to win struggles at, and ultimately claim, planets that are put into play at the beginning of the game.  A line of seven face-down planet cards are made between both players and the player who wins initiative reveals the first five of them, starting with the leftmost card relative to them.  The “first planet” marker is then put on that leftmost card.  Each planet features one or more colored icons on top of their cards — red (material type), blue (tech type), and green (strongpoint).  The first player to capture three identical icon types by claiming the associated planets wins the games.  Alternately, a player can win by destroying their opponent’s warlord or by their opponent simply running out of cards in his or her draw deck.  Before the first turn, each player draws a starting hand of cards and receives their starting resources based on the figures listed on their Warlord’s card.  Each turn is then broken into four distinct phases. 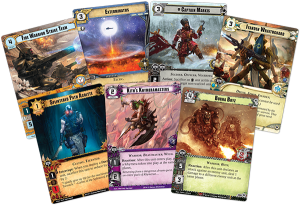 During the Deploy Phase, players take turns deploying units to any available planets or support cards to their HQ (the area directly in front of them) by paying their resource cost.  Careful consideration must be made by players concerning where they send their units and when as struggles for command and control will happen in the following phases.  When players are unable or unwilling to deploy any more units to the battlefield, the Command Phase begins.  Both players pick up their dial, which will allow them to secretly select a number between one and five.  This corresponds to the five (or fewer) planets that are in play.  The dials are simultaneously revealed, showing what planet each player’s Warlord is being deployed to.  It is important to note that any units that may be in your HQ follow your Warlord to that planet and do so exhausted (tapped and unable to battle at the moment).  Now, one by one, a command struggle takes place at each planet.  Most unit cards have one or more hammer icons present on them which represent command icons.  If both players Warlords are present, or if neither are present, the player controlling readied characters with the greater amount of these icons wins initiative and claims the benefits the corresponding planet offers – typically a certain amount of resource tokens and the ability to draw a specific number of cards.  If only one player has a warlord at a planet, they automatically gain initiative and there is no need to count icons. 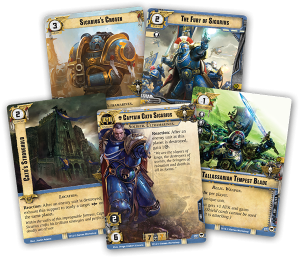 Play then moves to the combat phase, during which a battle occurs at the first planet and then any other planet where a Warlord is present.  If both Warlords have moved onto the first planet, only one combat would take place, but if one were stationed at the second planet and one at the fifth for example, three combat struggles would take place that turn.  Combat in Warhammer 40k: Conquest can be quite a brutal affair and battles are fought until only one side is left standing.  Units with the ranged attack trait will always get the first attack in any combat situation.  After that, the standard battle phase begins and players determine who has initiative.  If either both or neither Warlords are present at a planet, initiative goes to the player who received the Initiative Token at the start of the round.  The player with initiative starts by declaring a unit they control as the attacker, exhausts it by turning the card on its side, and selects a target in the opponent’s army which will be the defender.  That defender will take damage equal to the attack value and would have wound token placed on its card according to the value it was hit for.  If the number of wound tokens ever exceeds the unit’s Hit Point value, the unit is destroyed.  Some damage can be blocked or evaded through card effects or by playing a card with shield icons from your hand.  Each shield icon present on a card will block one damage from an incoming attack.  After the first player has completed this attack, the other player would attack with one of their characters in the same fashion.  Once all units have attacked and are exhausted, players would both ready all units simultaneously (including units that may have arrived exhausted with the Warlord) and players would have the opportunity to retreat any units they wish, bringing them back to your HQ.  Warlord units, in contrast, may choose to retreat any time they would attack, moving back to the HQ instead of attacking an opponent.  This sequence repeats until only one side has a presence remaining at the planet – that player wins the combat and gets to activate the “battle” ability listed on the planet card.  In addition, if the battle was at the first planet, the winning player claims that planet into their score area. 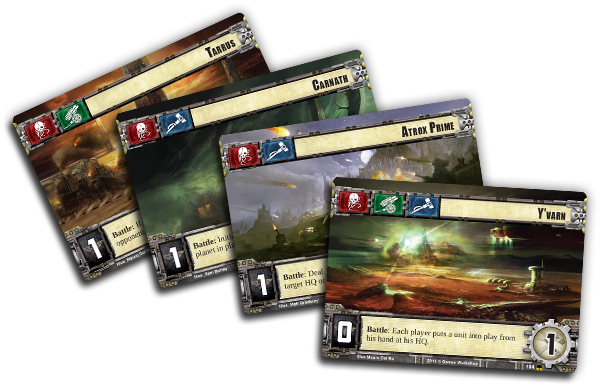 Finally, a cleanup and refresh of sorts happens during the Headquarters Phase.  The First Planet Token moves down the line to the next planet, one more planet from the face down row (if any remain) is revealed, and each player receives four resources from the supply and draws two cards.  The Initiative Token changes hands and another turn begins.

From what I’ve experienced of Conquest thus far, I’m quite satisfied with the direction they’ve taken it.  It shares familiar mechanics with the other LCGs while maintaining a fresh approach.  The faster play time, limited rounds, and resource gathering makes each game feel like a frenzied, desperate battle for control, which suits the Warhammer 40k theme perfectly.  While deckbuilding at this point is difficult, I’m very much looking forward to seeing how additional core sets and expansions will allow me to tailor my deck competitively.  There will be so many options available in the free-to-use allied factions cards to make deck-building in Conquest extremely fun and challenging.

Time will tell if Warhammer 40k: Conquest will reach the popularity level of Netrunner or if it will miss its mark with gamers, but I believe Fantasy Flight will have a hit on their hands.  The artwork is exquisite throughout, the rules are easy to pick up (but the strategy involved can be intense), and above all, it’s a ton of fun.  The combat here feels very direct and more like you’re actually sending armies to crush your foes – moreso even than titles like A Game of Thrones.  There’s always something satisfying about deploying your Warlord to a zone with several units in tow, just waiting to wage all-out war.  Putting the whole package over the top is one of the best instruction manuals to come packaged with an LCG to date combined with a second handy book which serves as an advanced rule set/glossary of terms.  It really helps get you into your first game a lot quicker and offers a quick, easy way to reference terms as they come up.  Keep an eye out for Conquest to hit stores in the coming weeks.