General Rattlor Is Ready To Strike 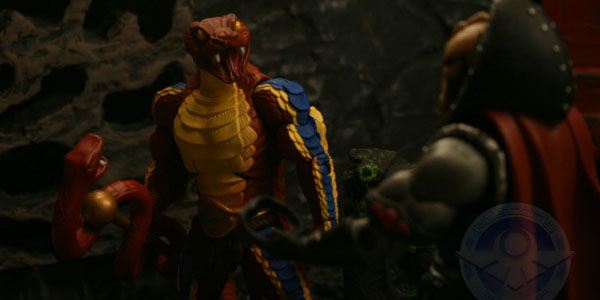 The Snake Men gains their general, Rattlor as part of this month’s Club Eternia subscription, but while he looks amazing, the former Snake Man is marred by poor logistic concerns, like his two fellow October figures.

Rattlor is an instant win, faring best of the three new MOTU figures this go-around. Every scale is meticulously executed. Thankfully, the Snake Men two-pack took care of any tooling costs associated with the General, sans the head and neck. Those pieces are expertly made, and it is great to finally have a two-toned neck for my favorite Snake Man. Sadly, the neck isn’t as posable as I would have anticipated, but it replicated the vintage action feature nicely! 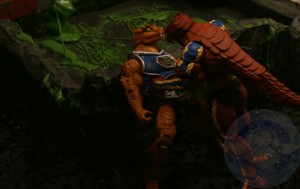 However, it’s hard to overlook the fact that Rattlor lost his 200x armor, probably due to all of the paint applications required to mask his black plastic paint. I have to wonder if his base plastic had been maroon to start with, would he have had less to paint, and then, would we have gotten his armor? His staff also lost deco that would have looked quite impressive, but as of now the staff’s snake’s diamonds are unpainted and the ball at the top kept the dull golden color of the rod.

The figure is a very solid addition to the line, and a much-needed vintage character, but the 200x armor is certainly missed. While the figure can wear the actual 200x chest piece, for those lucky enough to own The General, with any luck Mattel will be able to make good on this dropped accessory in a future Weapons Pack… which they certainly could if they produce another set as good as this month’s Great Unrest weapons pack. 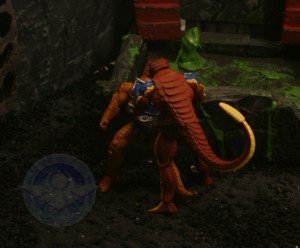 Where Design learns nothing from past sins, the Great Unrest Weapons Pack demonstrates that fan outcry, if done long enough, CAN be answered, but again, not without Design’s meddling. For the first time, we have been blessed with NEW fan-demanded weapons. It is an impressive mixture of new and established weapons that could not be costed in due to budget. The new weapons are Man-At-Arm’s 200x arm cannon, Horde Prime’s staff, Keldor’s 200x half-swords, and ALL of Dreago-Man’s other weapons! 200x fans can finally cobble together their ultimate Man-At-Arms with the first-release mustached head, the Snake MAA body, and the arm cannon completes the look! Horde Prime looks finally ready to stand as the true and ultimate ruler of the Horde with his imposing staff, something the crossbow couldn’t convey effectively. Draego-Man’s entire arsenal arrives in style: a shield that flames on and off with detachable fire, an alternate unflamed sword (a companion piece to the one he came with), and flame whip.

If only the other Masters had half of the attention Draego-Man received, this line would be more Classic than in name only. The rest of the repainted weapons range from clever (a pale white/blue bird for Temple Of Darkness Sorceress, green Clawful shell for Dekker) to “I get it but why?”  (Teela’s unnecessary redder cobra armor/staff/sword, and an Evil Lyn blue shield that doesn’t match any of her other blue) to “WTF??” (Teal Carnivus weapons and Clawful’s green mace in… an almost identical green). Some were some essential additions, but it was as if they needed to have the WORST-conceived redecos to firmly establish the opposite side of the Bell Curve.

If Rattlor was the worst-handled figure this month, it would probably be easier to look past his production value shortcomings. As it stands, he’s the least egregious offender this month, making October’s offering a very mixed bag at best. Check back tomorrow for our look at Cy-Chop, the latest 30th Anniversary figure, and a victim of betrayals by both Kronis… and Mattel Design.