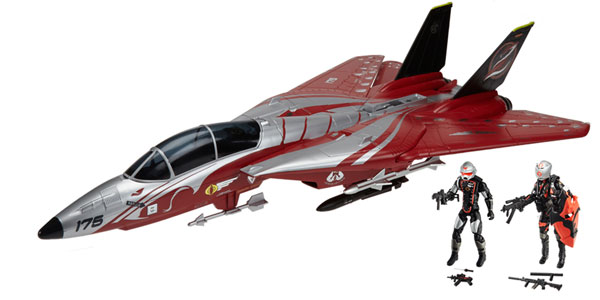 Here’s a look at the TWO GI Joe sets coming to Comic Con this summer.

It’s a bummer that Hasbro’s GI Joe team will not be holding a panel at San Diego Comic Con, but not all hope is lost for GI Joe.  SDCC 2015 will feature not one, but two Joe box sets, the first new Hasbro releases of the year.  Here’s a rundown of both exclusives…

The Desert Duel set will be released at Toys R Us stores in August… but the SDCC edition is the only one to include the extra two figures, Night Fox and Cobra Air Trooper.  The vehicles in the Crimson Strike set will also see retail release, in an entirely different deco and with different drivers, as the TRU exclusive Silent Strike set.

Both sets look pretty cool, and while it sucks because this SDCC edition Desert Duel will likely be a huge headache to acquire, the concept of adding in bonus figures as the exclusive is a kind of novel one.  2015’s GI Joe toys will see a lot of parts reuse… but the tools Hasbro has dusted off here are at least good ones, so there’s a lot of really nice sculpts and well designed figures and vehicles rolling out in their new paint schemes.  The thing that’s kind of weird, though, is how the focus of this year’s line has strayed away from the core Real American Hero cast… aside from a few familiar faces like Chuckles, many of these figures are either generic troop builders or new creations.  While that’s certainly cool (and while it’s most certainly in line with Joe history, to kitbash all new characters into being), it makes my desire to own these sets just slightly less urgent.  What do you think?