GI Joe Club Adds Another Oktober Guard To The Roster

The GI Joe Collector’s Club revealed the second figure in their 2012 Convention exclusive set– Oktober Guard mainstay Schrage! On top of that, the Club has also set live this year’s reveal grid, which indicates the 2012 Con set will include 10 unique characters… Six will be Oktober Guard, with four adversaries yet to be revealed! 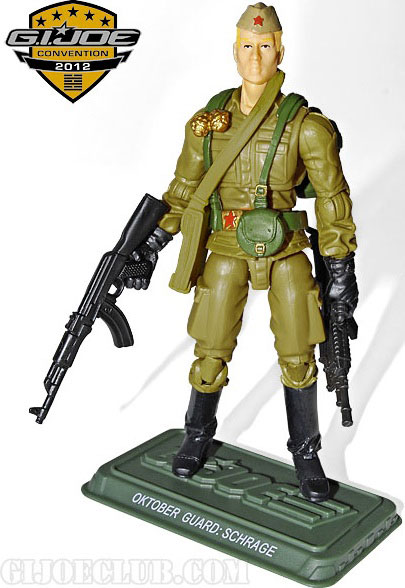 With Daina and Schrage already shown, we’ve got four more Russian troopers waiting to be unveiled, along with the four enemies (most likely including troop builders), who the Club is keeping in the dark right now. What’s cool about setting this set up as the Oktober Guard versus someone else is, due to the (usually) friendly rivalry between the Guard and their Joe counterparts, the opponents in this box set could in fact be GI Joes!

When it comes to reveals like this, the Club has it down to a science, so I bet we will see at least one or two more Guard members revealed this week (c’mon Horror Show!!), and the remaining mystery opponents to follow shortly.  For a die-hard Larry Hama fan, this set just keeps looking better and better.