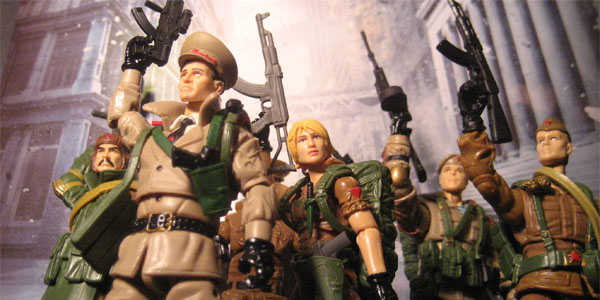 The GI Joe Collector’s Club has announced a limited edition second run of their Joe Con exclusive Oktober Guard set, earning them some major flag points, in my opinion.

Yesterday the Joe Club announced they will be offering a limited edition second run of their 2012 Convention exclusive box set, “Operation Bear Trap,” including the core cast of the Oktober Guard, plus Voltar and a new legion of Iron Grenadier troops. It’s an awesome set– one of the Club’s best in my opinion– and I’m obviously not alone… the set sold out at Joe Con this Summer, but before that, preorders for non-attending Joe Club members sold out in less than 45 minutes, a major bummer for myself and many other collectors who missed out.

The Club has been looking into re-releasing the set since this year’s Con, realizing they are dealing with a jilted fan base that missed the too-short sale, as well as the possibility to make more money by offering a second run of the very popular set.  After all the radio silence on this front, I’m very glad with the Club’s final answer– re-releasing this set is a very good move.

The Oktober Guard is a bigger part of the Joe universe than many of the Club’s past, more obscure releases, and I really feel that the likes of Horror Show, Brekhov and Daina have a more permanent home in the collection of any Joe fan, much more so that a Mission: Brazil sub-set… at least, the Joe fans willing to pay for it.  Which they have proven they’re willing to do– the Oktober Guard set is selling for insane after market prices currently, and I think the Club realized they could be making a (more reasonable) profit themselves, rather than leave it up to the scalpers and speculators to see how hard they can drive this set.  It’s rare that a company like the Joe Club can have their cake and eat it, too, but that’s exactly what they’re doing here– providing excellent fan service to their members who missed out on the set before, and likely making a tidy little profit for their efforts.

Some people don’t see it that way, as evidenced by the rather passionate back-and-forth on the Club’s Facebook post.  The big argument here is not a very good one– since the set was originally touted as a Convention exclusive, it should stay that way and not be re-offered.  I would guess there’s really two types of people who hold onto this mentality– speculators looking to make sure their potential secondary market value stays intact, and those “elite” collectors, the guys who take the re-release of a set they feel only they are entitled to own as a personal insult.  I typically never side with the scalper/ speculator types, but in a case like this I can honestly empathize; this set is pricey to begin with, even more so factoring in travel and lodging to the actual Convention. As such, I really can’t fault someone for trying to recoup some of their expenses by hawking a second set. It’s not ideal, but money doesn’t exactly grow on trees so i get trying to make ends meet.  And believe it or not, there are good speculators who can keep greed in check, and I’ve seen many times Con goers self-policing by making sure they don’t drive prices on exclusives into unreasonably high territories.

It’s the other folks whose argument I disagree with fundamentally, the collectors who don’t want more of an item to circulate because they were lucky enough to be one of the few to get it.  It’s a totally selfish attitude to have, and one that rears its ugly head all too often, especially at Conventions.  The ugliness is palpable in lines like Hasbro’s SDCC affair, as collectors push and shove to make sure they get what they want, and before everybody else.  In the end, it doesn’t accomplish much, aside from bolstering hostility and eroding any sense of community in the collector world.  These types of collectors give this hobby a bad name, as they defend against their hard to find items from becoming any less hard to find for what? Because they won’t feel as special?

That’s my take on this situation.  I chased down a set after this year’s Con, and these figures are so good, I want every Joe fan to have the opportunity to own them– I could care less if one or one thousand collectors get their hands on this set– it is awesome, and hopefully they’ll all think so, too!

The Operation: Bear Trap second run is available for preorder right now at the Joe Club Store… they’re only taking orders until November 30th, so don’t miss your last chance to own one of the Club’s finest Joe sets ever.  Click Here to order yours today.