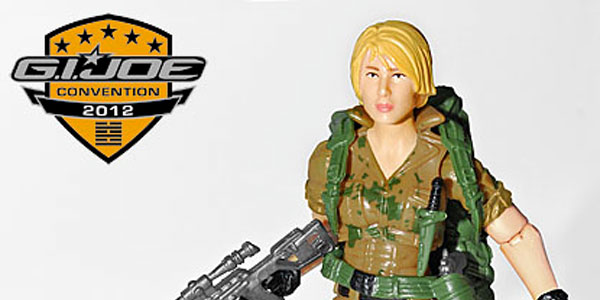 The GI Joe Collector’s Club is gearing up for their most exciting year, ever– the 2012 subscription Footloose is in the mail to most Officer Level club members now, the Figure Subscription Service will finally go live soon, and the 2012 GI Joe Con is coming up fast starting June 28th. And with just two months until the Con, the Club confirmed this year’s set will feature fan favorite Russian super soldier team, The Oktober Guard! The first reveal is the Russian sniper Daina, and she looks incredible.

When the Joe Club hinted a few weeks ago that this year’s Con set would deliver updated, 25th Anniversary figures of The Oktober Guard, I was stoked. The Joe’s top friendly rivals are a big corner of Joe mythos, but they’ve always received the short end of the stick when it came to getting captured in plastic. With any luck this box set will change that and bring us many Guardsmen I’ve been wanting for years– Daina looks fantastic, using the wonderful final version Lady Jaye body and a new headsculpt that’s light years ahead of some past pieces by the Club.

The Club posted on Facebook that the next reveal should be coming next Monday. I’m really hoping for another BIG reveal to really put this set over the edge– show me Horror Show or Dragonsky and I will probably buy my plane ticket to New Orleans on the spot.

See the full picture of Daina, along with more details on Joe Con 2012 on the official Joe Con website.