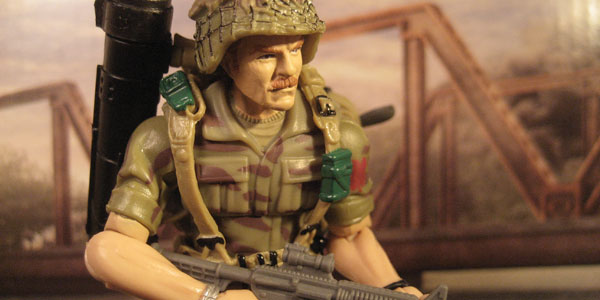 The GI Joe Club has released their 2012 Collector’s Club exclusive, and subscribers are now receiving the long-demanded 25th update of the classic Joe infantry trooper, Footloose. It’s been a long time coming, but Footloose is finally here– ready to effectively complete the Joe class of ’85– and the Club really pulled this one off. 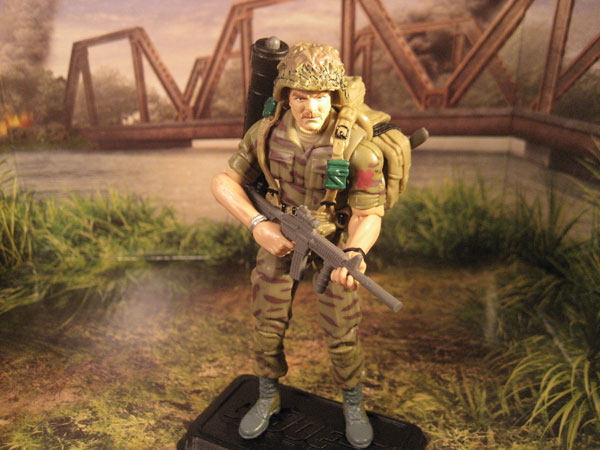 I’ve got some mixed feeling when it comes to the Joe Club. I love that they work so closely with Hasbro and they generally have their finger right on the pulse of what characters will really get a reaction out of Joe collectors.  But while many of their releases are awesome, they’re also marked up pretty intensely– I’m fine paying a premium for limited run toys, but with exorbitant shipping and prices at over double standard retail, the Joe Club generally pushes markup about as far as it will go.  To their credit, they have kept their subscription the same flat cost over the past few years, and at $42 for the monthly magazine as well as the exclusive figure, it’s usually worth the hit… especially this year.  Footloose is one of the best pieces the Club has ever made, and he’s the first figure I received that felt 100% worthy of the price tag. 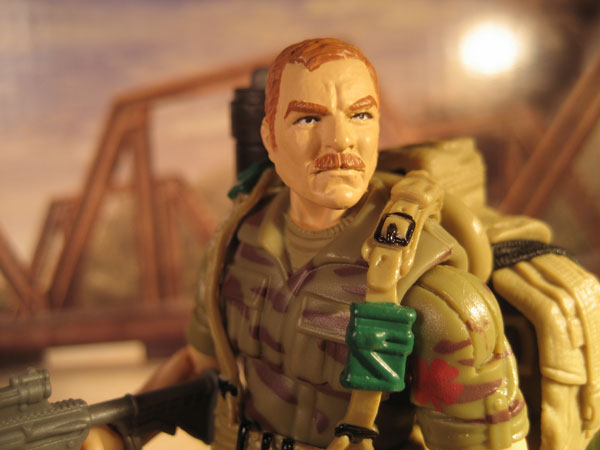 Footloose shares the headsculpt the Club created for last year’s Captain Claymore (which makes sense, since the original Claymore shared Footloose’s head), and the parts chosen for Footloose come together nicely– all the Club’s figures are assembled from existing molds (heads nonwithstanding), but Footloose looks complete and original, much more than last year’s kind of awkward Dialtone. By using some modern parts, there’s a great sense of texture to Footloose’s uniform, and his gear is a nice update of his classic infantry accessories, including Pursuit of Cobra Duke’s excellent backpack, a mortar that’s a straight translation from the 80’s figure, and his signature leaf-covered helmet. We also get treated to some excellent modern articulation here– in addition to the standard 25th articulation model, Footloose also sports the ball wrists that made their way into the line over the past few years, leading to one well-articulated soldier. 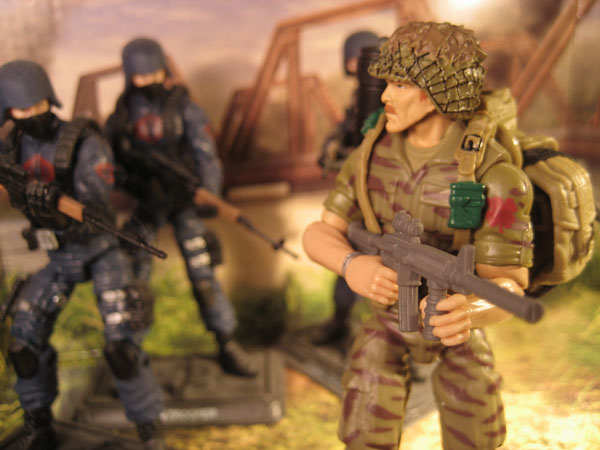 The paint apps on this figure are very solid across the board, with a green camo pattern that matches the classic figure perfectly, Footloose’s traditional reddish hair and mustache, and smooth, clean lines overall especially on his insignias. The figure’s skin tone is much more neutral than the reddish Dialtone, and compliments his uniform nicely, while making the figure look much more like a professional release than a custom job. Like all Joe Club figures, Footloose also includes a display stand with his name and a stand-alone filecard, which replicates his classic card nicely. 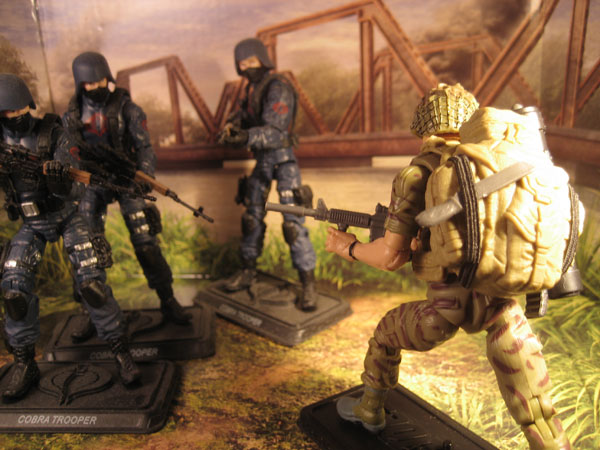 Footloose is a great example of what the Joe Club is capable of, and if future releases share the same level of though and quality put into this fan favorite, it will make it much easier to support the Club’s more questionable pricing and practices.  Footloose was the 2012 membership incentive figure, and was only available until the end of March, but the Club plans to release additional figures on their website shortly– if they follow last year’s plan, expect Footloose to be available at the Joe Club website both loose and carded on a 25th-style package, and available sometime around the Club’s Joe Convention at the end of June. 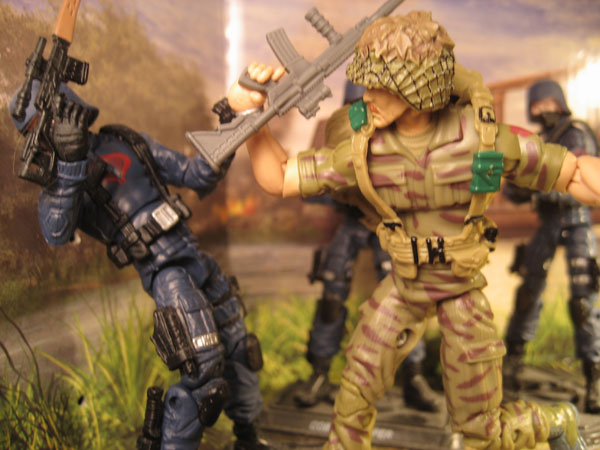 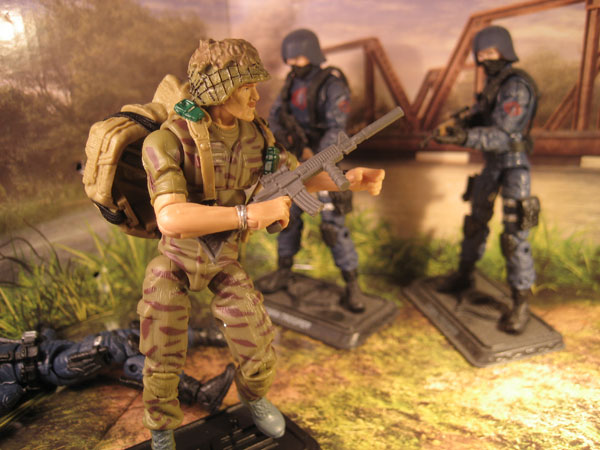 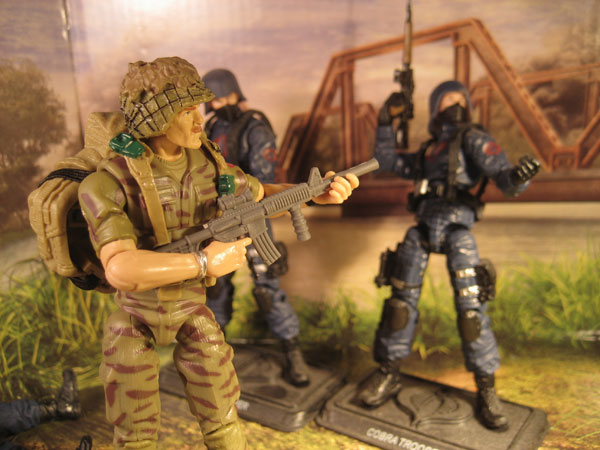 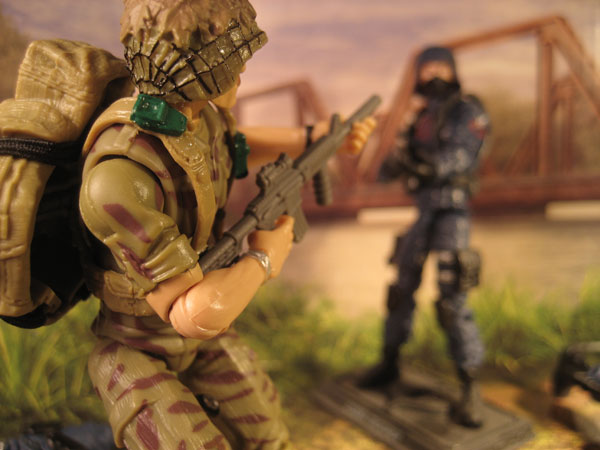 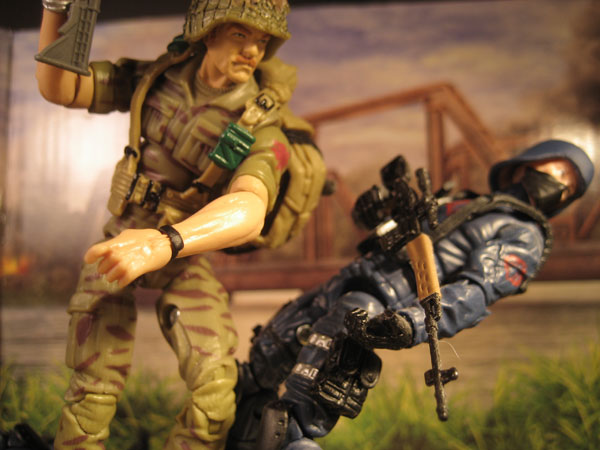