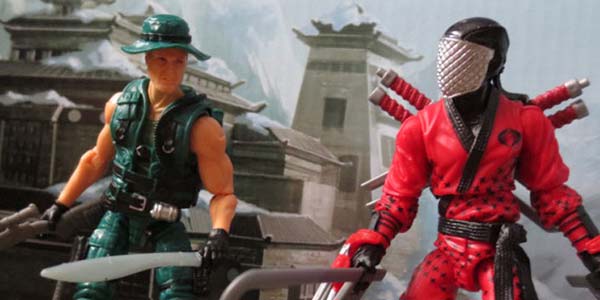 The latest duo from the Joe Club’s Figure Subscription Service can’t quite muster the excitement of the first two figures.

Last month, I was very pleasantly surprised by the first figures in the GI Joe Collector Club’s third Subscription Service series.  Both Repeater and Psyche Out really came together as well thought out, highly detailed and visually dynamic characters, accurate to their 80s counterparts while also feeling perfectly updated to the best of the Modern Era figure specs.  They were the first Joe Club toys in a long time that legitimately felt worth picking up.

I was hoping that feeling would continue for the rest of this Sub series as well, but the second pair of figures, while nice enough, is bringing me right back down to the underwhelming sentiment I had with pretty much all of the Figure Subscription Service 2.0 figures a year ago.

I expected not to like Slice very much, but he ended up way cooler than I would have anticipated… our latest Joe, though, Muskrat, leaves a lot to be desired.  I can’t quite place my finger on why I’m so turned off by the Job Club’s Muskrat figure.  He’s accurate enough, with his teal green swamp fighter fatigues, machete and boonie hat.  And unlike the Night Force edition, this Muskrat even includes his mini surf board, which is nice to have.

Overall, though, Muskrat feels too much like a custom kitbash and not enough like a newly produced figure worth shelling out $30+ for.  Each time I look at this figure, all I could think is how easily I could have made this exact same guy, myself, with minimal effort and for a lot less money.  I appreciate the Joe Club working with Hasbro to borrow molds and tools, but honestly with what they charge I need some unique tooling to justify these short run figures, and Muskrat just doesn’t have enough going on, in my opinion.  The biggest dealbreaker for me? None of this figure’s gear can store… I can’t imagine it would have been tough to make or tweak a backpack that could hold the board or bear trap… but instead those pieces have to either be held in the figure’s hands, or fall by the wayside. 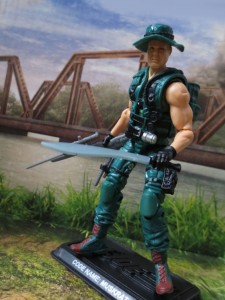 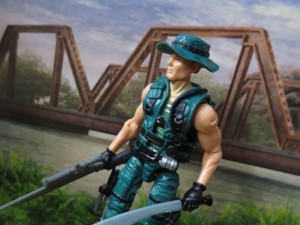 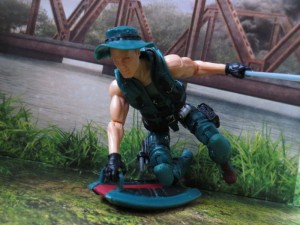 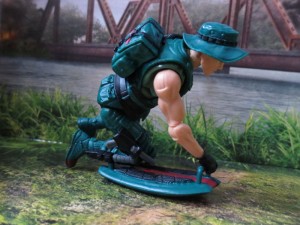 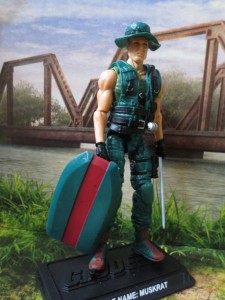 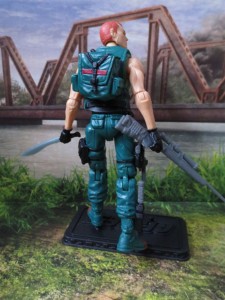 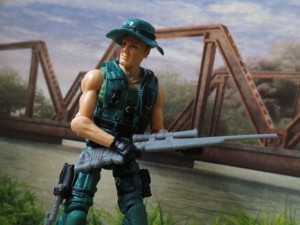 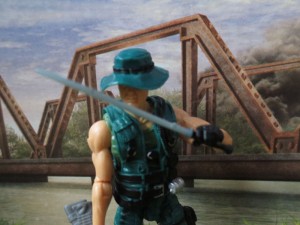 Like I said before, Slice– the Cobra ninja and one half of the evil Ninja Force duo Slice and Dice– is actually way, way better a figure than he has any right to be.  I fully expected the Joe Club to simply recast the Retaliation Red Ninja with a new paint job and the previously-released fencing mask slipped over his head (exactly the same lazy approach they took to the Dice figure last year).  But no– Slice features an all-new, very cool headsculpt, which looks great and maintains a sense of proportion in the figure that might have been thrown off with a larger overlay mask.

Slice also features a ton of accessories, including four swords with a backpack sheath, two wrist blades and two tonfa blades.  Not only does all this gear store in place pretty well on Slice’s wrists and backpack, but the blade theme lends itself perfectly to the character.  Slice’s gi is a simple red-and-black pallet, but the red is bright and contrasts nicely with the black trim, and the black patterning near the middle of the figure breaks up the monotony of the red in a great way.

I’m not the biggest GI Joe ninja fan, so I don’t think I ever considered Slice or Dice to be mandatory additions to my collection, but Slice at least is a very nicely made figure.  While he’s leagues ahead of his partner in crime in terms of sculpting, design, engineering and overall quality, they still look pretty cool as a pair. 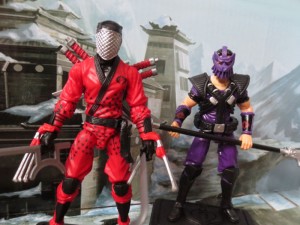 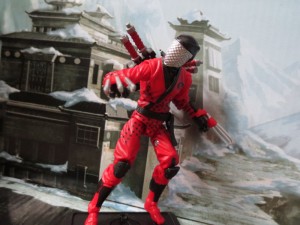 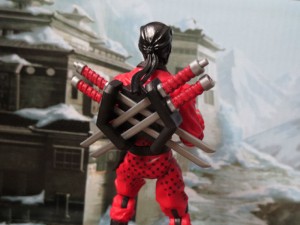 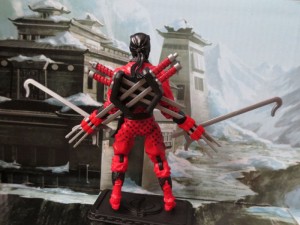 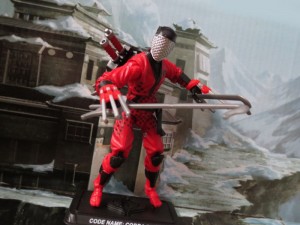 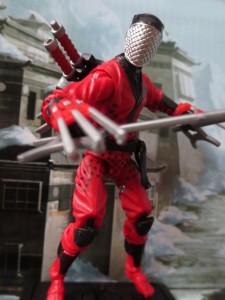 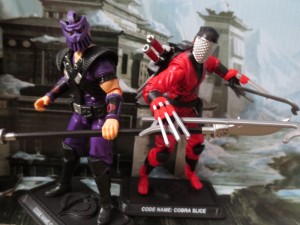 Unexpectedly, Slice almost makes up for the shortcomings of the lackluster Muskrat figure, so I’d call this second wave of figures a wash overall.  It’s nice to have both characters in the Modern Era, but the dull design of Muskrat and the silliness of Slice as a character leave both figures nowhere near the must-own list, especially at the Club’s current pricing.  That being said, Slice keeps up the new attention to detail and quality control which made Repeater and Psyche Out both winners.  That means the Joe Club has really brought their A-game for three out of four FSS figures this time out.  Let’s hope the other nine figures in this series follow suit.