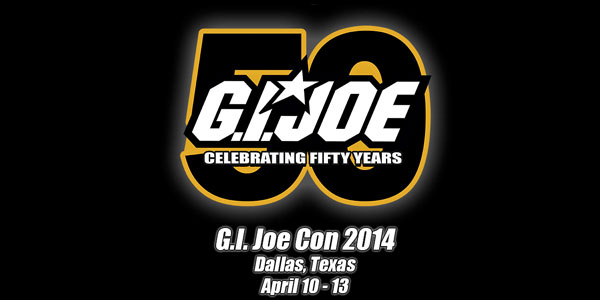 This year’s GI Joe Con set has been announced.

GI Joe Con is coming to Dallas next April, and the first round of details on the show have been revealed at the Joe Con website.  The new 3.75″ set will feature a zombie theme, picking up on the “Compound Z” story arc from the Pursuit of Cobra toy line, and rolling in the Eco Warriors from the 90s just for fun.

It’s a cool concept, and much more exciting than the frequently rumored Tiger Force set.  The lineup of figures will bring long desired figures like the Toxo-Vipers and Toxo-Zombies, as well as modern updates to three of the core Eco Warrior Joes, which is kind of neat and totally unexpected.  This also gives them the opportunity to roll some of the zombie-fied Cobra and Joe figures from Hasbro’s concept vault into the set as Con exclusive side figures, so good news for everyone attending this year.

The 12″ set will commemorate the 50th anniversary of the original GI Joe, with a three pack of Joe Colton figures… two dolls and an all new 3.75″ figure, which will also be available at the Convention as a MOC exclusive.  It’s another good concept, and fitting as Joe celebrates his golden anniversary.

Here’s the whole scoop from the GI Joe Club.  These exclusives sound pretty enticing, so maybe if plane tickets to Dallas aren’t super crazy, we will cover his year’s show?…

COBRA forces have acquired the “Compound Z” formula and have started testing it on their own soldiers. They believe by creating zombie warriors they can rule the World and turn its population into mindless creatures. G.I. JOE headquarters is split on how to handle the zombie affliction: save or eradicate?

GENERAL HAWK has formed two groups to solve this deadly problem. Who will be successful? Will it be the Zombie Hunters whose mission is to eradicate those infected or will it be the E.C.O. (Emergency Chemical Operations) Force trying to rescue and find an antidote for those afflicted? And, what about the team members who become zombies, are they a casualty of war? If too many are turned, who will be left to complete their mission? Only time will tell and it’ s running out!

The 2014 G.I. JOE vs. COBRA convention set contains highly requested teams and some new additions available for the first time in the modern era 25A action figure style. This special edition set includes:

Each of these great teams comes with classic weapons, accessories, figure stands and file cards in this exciting fifteen figure boxed set.

Also, make sure you are there for package pick-up on Thursday night so that you won’t miss this year’s souvenirs! These convention exclusive souvenirs will feature uniquely themed action figures and vehicles to battle the zombie apocalypse! Plus, all these limited edition products will have a major role in our exclusive 2014 GIJoeCon comic book!

He is a legend. His adventures have spanned decades and he has touched the lives of millions. Serving his nation in time of conflict in uniform and out, he became the basis of a force for good standing in the breach in the fight against evil. His birth name is Joseph Colton, but his Codename: G.I. Joe. We have followed G.I. Joe through a series of exploits that took him from the brown boot army, to the founding member of the covert operations team. He has directed this team (which bears his codename) in their quest to face down Cobra’s bid for world domination. He IS the original real American Hero.

In addition, to celebrate all ages of G.I. Joe , this set comes with a unique 3 3/4” Joseph Colton, G.I. Joe with Pistol and Club Action Figure Display System with 50th Anniversary backdrop. All of these items will be packaged together in a 50th Anniversary display box.