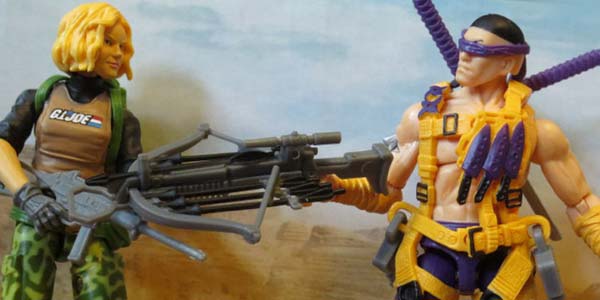 A fan favorite from the Valor vs. Venom era makes her return in the latest wave of figures from the GI Joe Collector’s Club.

We’re nearing the end of the third Figure Subscription Service from the GI Joe Club.  The fifth wave has now been released, consisting of Bombstrike– the GI Joe team’s Forward Air Controller– as well as the Night Creeper Leader, who commands the techno-ninja known as the Night Creepers (duh).  Since these two figures have now shipped, we also know the final round will pair Big Ben with the Crimson Guard Immortal… although that last box will contain the mystery 13th figure, so the element of surprise will still be there.

But that’s for next month, anyway– for now, we’ve got two new figures, both getting their Modern Era debut.  And they’re both pretty good! 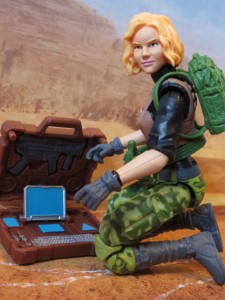 Bombstrike (nee the more degrading “Bombshell”) was one of the last major female characters introduced to Real American Hero continuity, but she was well received when her first figure came out as part of the Valor vs. Venom series, despite a storyline which established her as a Prisoner of War in need of rescue.  It was a bummer to introduce a new female character as, in essence, a victim… but the Joe Club has moved Bombstrike in a different, more empowering direction with their new figure.  Most importantly, they’ve added meaning to her specialty– she’s a drone operator, and comes packed with a UA Air Force branded repaint of the drone that came with Retaliation Duke.  Bombstrike also includes a briefcase computer, which serves as her control unit for the drone, and a rifle and backpack.  This new figure, while retaining the blonde hair and good looks of the original character design, also gives Bombstrike a sense of agency which she lacked in the past, which is a great decision.

As for the makeup of the figure, she features a smart assembly of parts, mostly from Lady Jaye (both Retaliation and 50th Anniversary).  I love the color layout here– the black shirt, camo pants, grey booths and tan flak vest all coordinate to make this figure pop, while retaining a realistic military appearance.  I’m also a big fan of the Joe logo, tampoed on Bombstrike’s chest.  This could have wound up too on the nose (how many Joes have the logo on their uniform, really?)… but here it totally works.  The all new portrait from Boss Fight Studio is great, too, making Bombstrike feel like a wholly new, unique character in the collection.

So Bombstrike is great, and I couldn’t be happier with how the Club handled her update.  On the bad guy’s side, we get Night Creeper Leader, who– while not as excellent as his Joe nemesis– is still a solid enough release.

I liked the Night Creepers well enough.  In continuity, they were technologically-inclined ninjas hired by Cobra after they split from the Arashikage Clan.  That sort of transactional setup was always really cool to me, grounding the often fantastical Joe vs. Cobra in a realistic context.  The Night Creeper Leader– who went by no other, less practical code name– was a presence in both the vintage toy line and the later Joe cartoons.  He’s one of the first characters where I preferred his animated look, essentially a standard Night Creeper uniform, but without the mask. 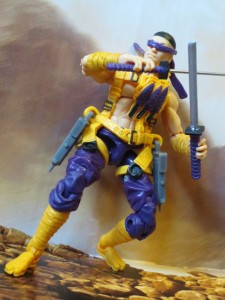 In toy form, Hasbro opted for a more radical design when he was released under the Battle Corp umbrella in the early 90s.  Their version of the head Creeper sported a bare chest, a blindfold over his eyes, and loads of ninja and military gear.  This is the version the Joe Club is paying homage to with their new figure, and he’s a well executed update to this over-the-top look.

Night Creeper Leader uses the Ultimate Snake Eyes based body, a great choice thanks to its hyper poseability and detailed sculpting, as well as the elaborate ninja themed web gear from the Retaliation 3-pack Snake Eyes.  The head on this figure is a re-purposed Serpentor, with the blindfold courtesy of the Club’s own Jinx.  As a GI Joe ninja figure, you can probably guess what this figure comes packed with, but the quick rundown is two swords, two throwing stars, two daggers, two uzis that clip in his belt and a crossbow.  It’s a good spread of gear, but sadly the figure is limited in how much of it he can store (the web gear in question features many of the same weapons, molded permanently in place).

When the character first made his toy debut, he featured two alternate colorways.  The original was predominantly orange and black, with tiger striped pants.  A repaint was issued a year later, with a new deep yellow and purple deco, which was still pretty outlandish, but meshed a little closer to the Night Creeper’s grey-purple-maroon color scheme.  The Joe Club’s figure replicates these repaint colors, and like Psyche Out, the confluence of realistic sculpting and completely silly colors actually makes this guy a fun looking toy.

I do have one other issue with Night Creeper Leader, though.  The vintage figure had a black cap above his blindfold, making it appears as though the entire top of his head was covered.  The Joe Club figure’s blindfold is much thinner, so there is a big gap between the top of the bandana and where his black cap begins.  This leaves the black looking very obviously painted-on, and cheap in my opinion.  I wish the Club had carried the black paint further down the figure’s forehead so it appeared to connect to the purple blindfold.  This would look even weirder if you opted to display your Night Creeper Leader without his blindfold… but c’mon– why would you even do that?

If every release from the Joe Club was as cool, fun and well thought-out as these two figures, the Figure Subscription Service would be one of the best toy lines going.  As it stands, both Bombstrike and Night Creeper Leader are exemplary action figures, and provide great updates to these characters from their disparate corners of the GI Joe universe. 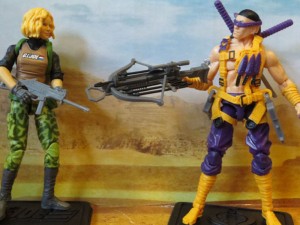 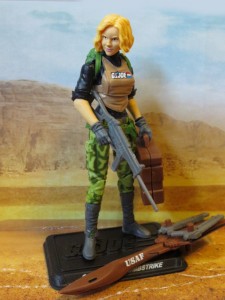 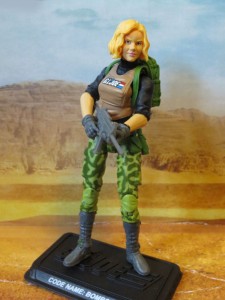 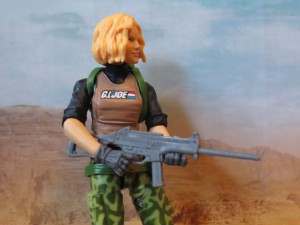 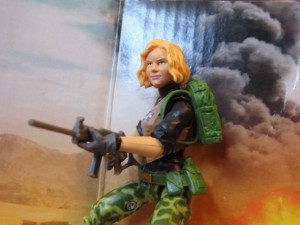 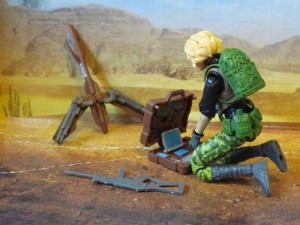 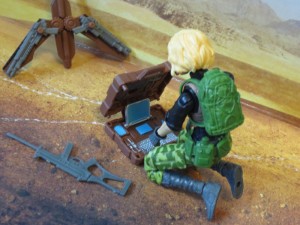 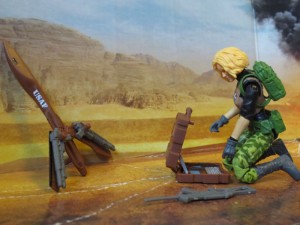 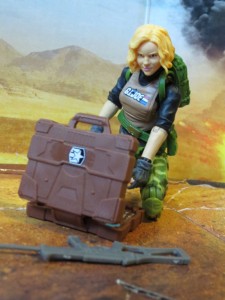 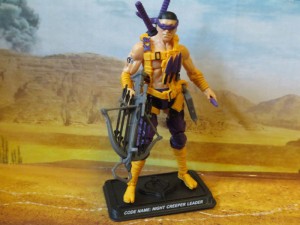 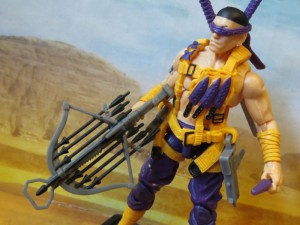 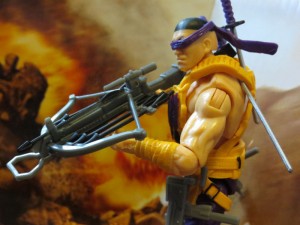 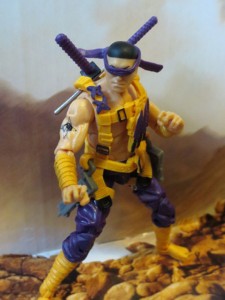 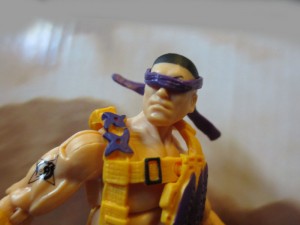 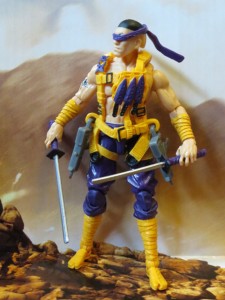 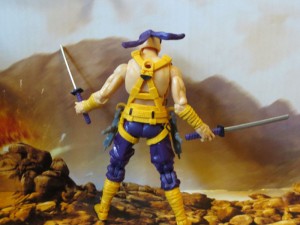 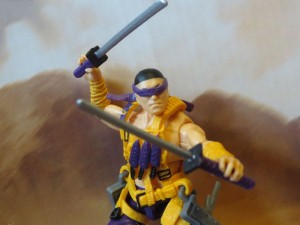 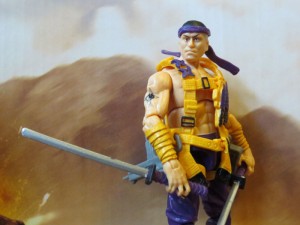 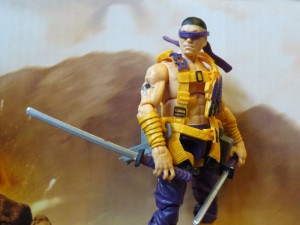