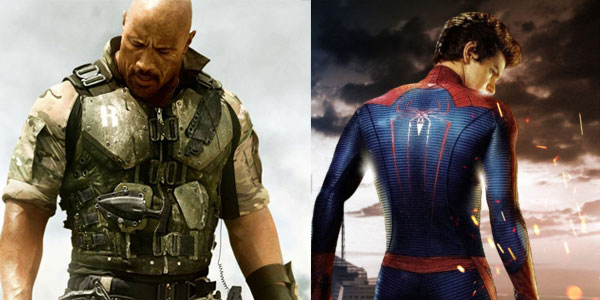 With The Avengers already in stores, Hasbro is gearing up to release their next Summer movie toy lines in just a few weeks. In preparation for the May 28th release dates, Pre-Order solicits for GI Joe Retaliation and The Amazing Spider-Man have gone live at e-tailers across the web. And much like The Avengers line, both new series are pretty broad in scope and (compared to the past) kind of light on action figures.

2012 is shaping up to be a weird year for action figures. With some staple lines like DC Universe Classics fading away, and a trend toward much smaller movie tie-in lines, it seems like there is a much smaller pool of toys to add to the want list compared to the past few years. That’s not a bad trend– I’m more than happy to pocket the extra cash and still have some cool new stuff to add to the collection here and there. The trend I’m less pleased with is the articulation cutbacks we’ve seen from pretty much all of Hasbro’s 3.75″ figures. It wasn’t the deal-breaker I was afraid of with The Avengers, but it certainly will be with the awful 5 point of articulation GI Joe drivers.

Still, even writing off the vehicles, the Retaliation series looks pretty awesome and I am excited to see the first two sets solicited now (as you may recall the first wave is kind of a “concept series,” with Wave Two being the first movie accurate Joe figures). With a healthy dose of troop builders, some very nice movie designs to capture in plastic and good actor portraits, the Joe line promises to be kind of amazing. And those Red Ninjas and Joe Troopers will be mine as soon as possible.

Spidey’s line is VERY kid-focused, as expected based on Toy Fair. There’s a new 3.75″ figure line that rehashes the same characters we already got in the last 3.75″ Spidey series (e.g. Green Goblin, Doc Ock and tons of silly Spidey variants), but with even less articulation. The second set looks more promising, with a movie-accurate super poseable Spider-Man and a mystery figure who is almost sure to be a movie version of The Lizard. The movie Spidey looks good, but truth be told I may wait for more info on the likely-exclusive Legends style Peter and Lizard revealed at Toy Fair.

Here’s a message from Big Bad Toy Store about their GI Joe and Spidey preorders… Check out the links for all the details on these upcoming products.

GI JOE RETALIATION MOVIE TOYS
Hasbro has just announced the line-up of toys for the upcoming GI Joe movie. It
includes 2 series of 3.75″ figures as well as Alpha, bravo and Delta Vehicles,
10″ Figures, Showdown Sets, and a number of role play items like Ninja masks, a
blaster and a sword. Many people have been eagerly awaiting this line, and now
it is ready for pre-orders.

AMAZING SPIDER-MAN MOVIE TOYS
Spider-Man also has a new movie coming out, and the listings are now up for his
new toys as well. It includes 2 series of 3.75″ Mission figures, Web Battlers,
Web Spinners, Flip N Attack figures (that will look more than a little familiar
to G1 TF fans), an Electronic Spider-Man figure, Super Hero Squad Movie Packs,
Zoom N Go Vehicles, a Mega Battle Racer (MASK fans might recognize the
predecessor of this one), all kinds of role play items, EMC 2″ figures and a
vehicle and 8″ EMC Hero figures. Fans of Spidey will not want to be late to
place pre-orders for these new items.

Thanks for your interest in www.bigbadtoystore.com and be sure to check out
some of the new preorders above.