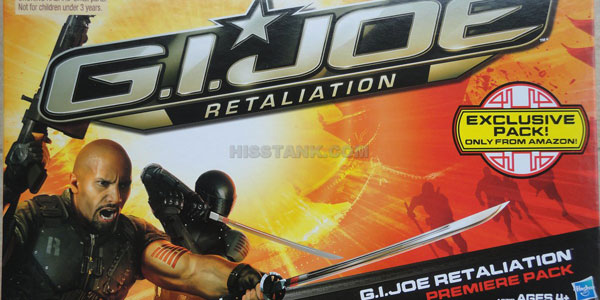 Months before Toy Fair, rumors started swirling around a mysterious listing posted on amazon.com for an alleged exclusive GI Joe Retaliation Preview 4-Pack. While the listing disappeared and Hasbro kept mum of any movie preview sets at Toy Fair, in-hand product shots have now hit the web featuring an Amazon-branded box set… and more exciting is, it’s clearly labelled “Premiere Pack,” so odds are we will be seeing this sooner than later! But the excitement doesn’t end there… Amazon is apparently also releasing a new Renegades 4-pack, too! Get all the latest Retaliation toy news right now.

The Amazon exclusive Retaliation 4-pack includes Roadblock, Snake Eyes, Storm Shadow and Cobra Commander (based on box art the black deco variant that showed up recently on EBay). This matches the short-lived amazon.com listing, so this seems to validate the exclusive. 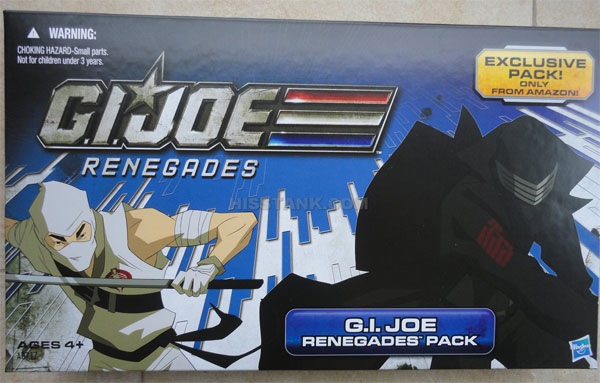 The Renegades pack, meanwhile, includes Snakes, Duke, a Cobra Ninja Viper and Storm Shadow– GREAT news for those who missed the elusive ninja during his rarely-seen 30th Anniversary Wave 3 release, and a testament to Hasbro’s dedication to getting toys in fans’ hands. The Ninja Viper appears to be a red repaint of the Renegades Storm Shadow mold, offering a decent new take on the Red Dragon Ninjas in animated style. Possibly the most intriguing part of this reveal is the artwork chosen for Snake Eyes and Storm Shadow– the animated design of Tommy features his sleeveless costume, while Snakes is sporting his trenchcoat. While this character art alone doesn’t confirm, it’s possible both figures will be retooled to feature these alternate looks from the animated series, which would make this set a much easier-to-swallow purchase, in my opinion.

In other Retaliation news, with the toy line’s street date in May fast approaching, we did some digging and can now share the Target and Toys R Us DCPI and Item numbers for many Joe movie items! Check out the list below…