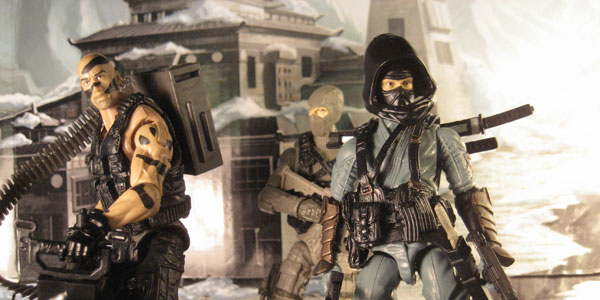 On top of the single-carded figures, Hasbro’s new GI Joe Retaliation line will also feature some themed 3-packs, made up predominantly of repaints and main character variants, with a few surprises thrown in to keep things interesting. Under the label “Ninja Showdown,” the first two sets– available as part of the Retaliation launch on May 28th– earn the name with lots of ninja action.

The first wave of Ninja Showdown sets includes the Ninja Showdown set, containing new deco’s on the Snake Eyes, Storm Shadow and Red Ninja from Retaliation wave one, and the Ninja Dojo set, featuring a Night Ops repaint of Roadblock, along with a new Sideshow-inspired Beach Head and Kamakura. 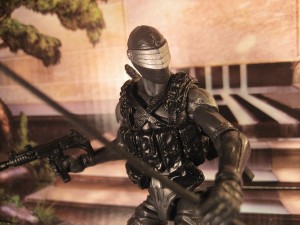 Both sets are pretty solid, but my leaning is more toward the Showdown– Storm Shadow, Snake Eyes and especially the Red Ninja were among the best of the single-card releases we’ve seen so far from Retaliation, and each one’s repaint is pretty solid.  The least new is Snake Eyes, as the ninja commando still sports his black uniform, but now with some silver trim on his body armor. He comes packing some swords and some machine guns, so both ninja and soldier fans have their choice in arming our hero. Storm Shadow features a white and grey costume that pops much more than his single card release (although is not as movie-accurate). 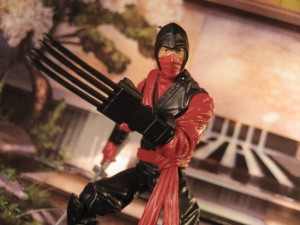 The biggest winner here is the new Red Ninja, who shares much of the same body as the amazing 30th Anniversary Stormy, but in a cool reverse black with red trim costume that compliments the mostly-red single carded ninja nicely. He also includes a sparring mask that fits his face well, and can serve nicely as a stand-in for Slice, the Ninja Force partner of the GI Joe Club’s upcoming Dice figure.  On top of the three figures, this set is loaded with TONS of ninja weapons and other gear… I’m not even sure which pieces are assigned to each figure, because there’s way more gear than any of them can hold. So basically, this set delivers three solid to great repaints, and an arsenal of weapons for all your ninjas– I call that a win. 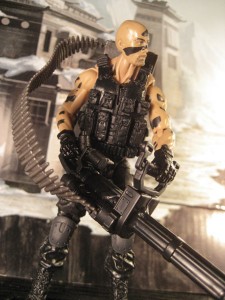 The Ninja Dojo set is also a solid entry. The new Roadblock, featuring an all-black uniform and black camo on his face and arms, is a nice improvement on the single carded release, especially because he has two functional hands, instead of the Battle-Kata feature that crippled the left hand of the single carded release. The likeness to The Rock is still great (although he inexplicably features a blonde beard here?).  My favorite of this set is the new Beach Head, who shares the realistic body of the Pursuit of Cobra Snake Eyes.  It works well, and this version of the Joe Ranger reminds me very much of the fantastic 12″ version created by Sideshow.  Rounding out the set is a franken-Joe Kamakura, who’s not one of the most graceful kitbashes Hasbro’s ever done. The green and black deco of his costume works well enough, and makes him stand out nicely from both Snake Eyes and also Stormy and his Red Ninjas, but the use of the armored Jungle Assault Snake Eyes parts (probably the only bad body created during the Pursuit era) threatens to ruin every bit of good in this figure. 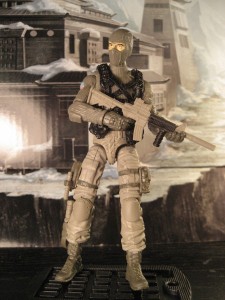 The saving grace is the meshing of the excellent 30th Storm Shadow torso, and the cool webgear courtesy of 30th Stalker.  Adding to the oddness is a too-large black hood, which does not fit his head very well… fortunately the hood is removable, and Kamakura looks worlds better without it.  The Dojo set also sports a ton of extra accessories, including some great knives and pistols with silencers, a rocket launcher and quite a few rifles– it’s a solid arsenal for these three and lots more Joes.

While there’s next to nothing new in these Ninja Showdown sets, the repainted figures are pretty cool variants, and the sets both really do pack a mind-blowing amount of accessories. At only $19.99 each (via Toys R Us, anyway), these three packs are hands-down the best bargain of the entire Retaliation series… That’s less than $7 per figure, PLUS you get all that awesome gear!  It’s unknown if that price point will go up, but I would strongly recommend picking both sets up while they last at this amazing price point. 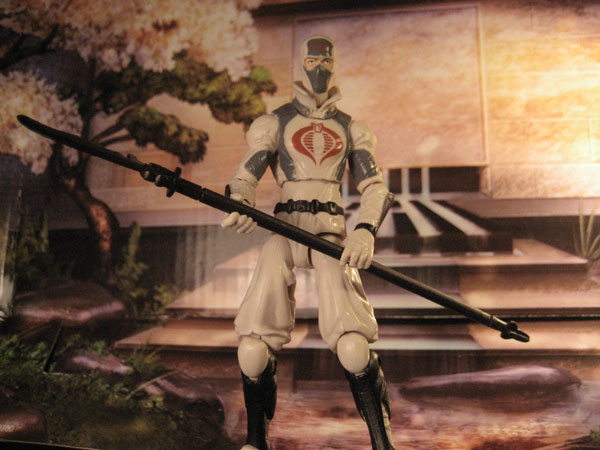 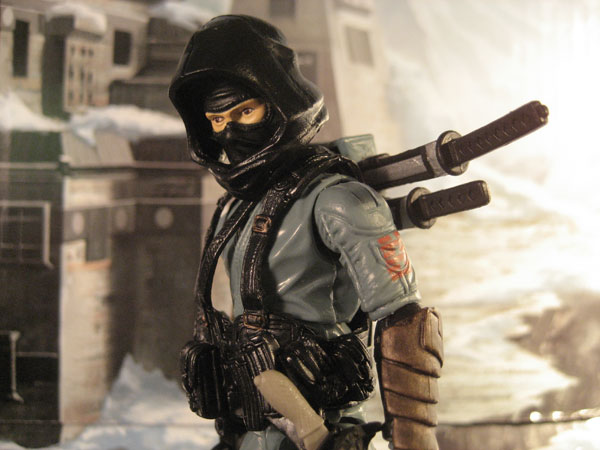 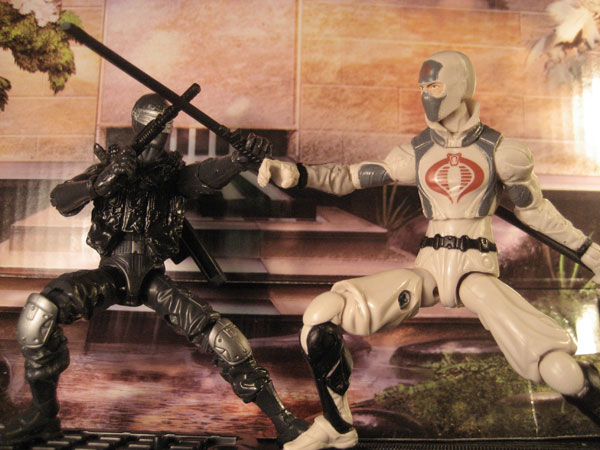 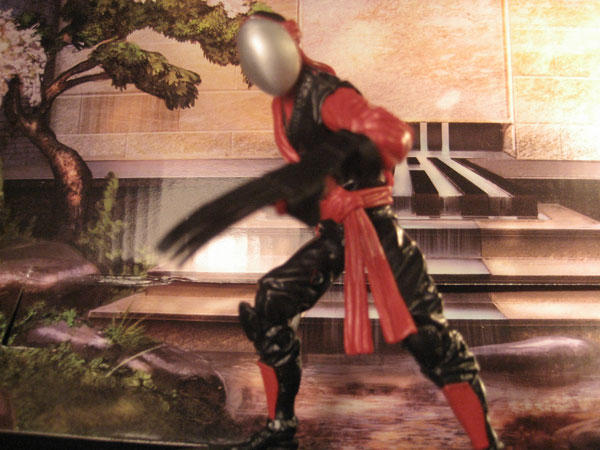 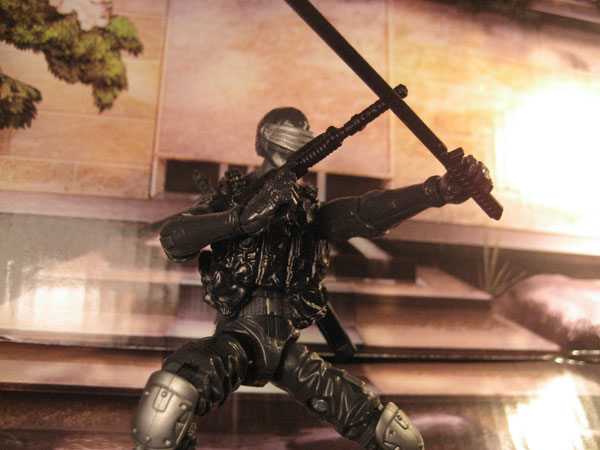 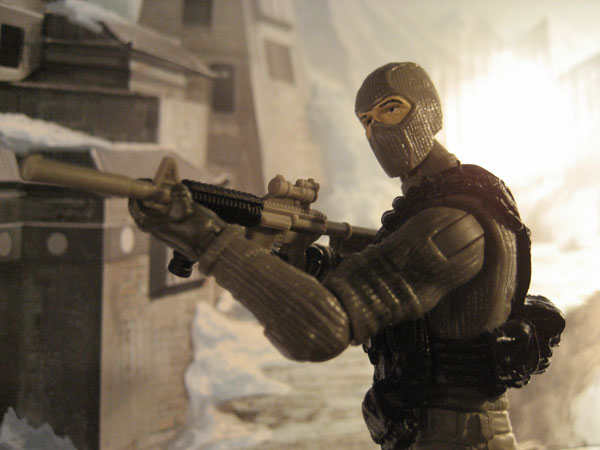 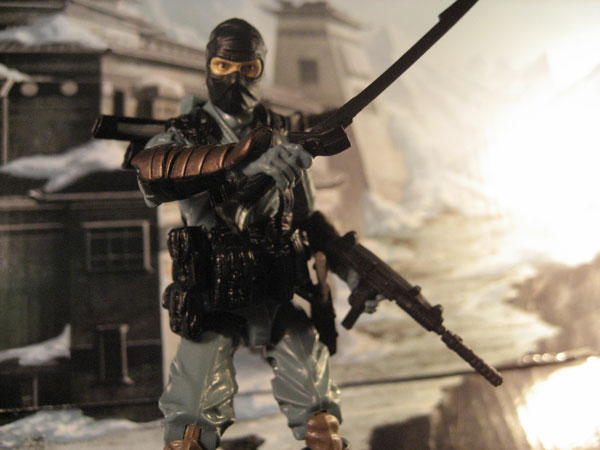 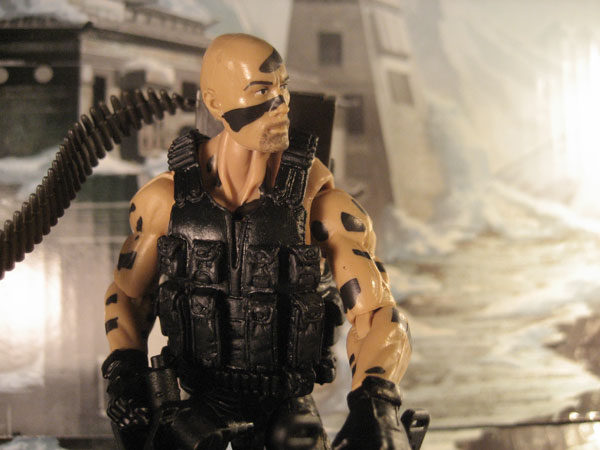 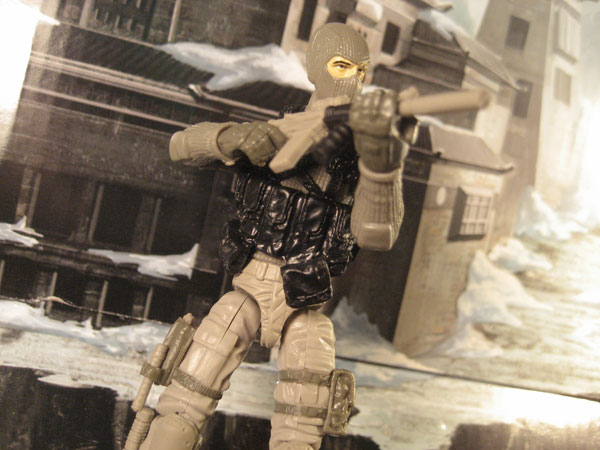