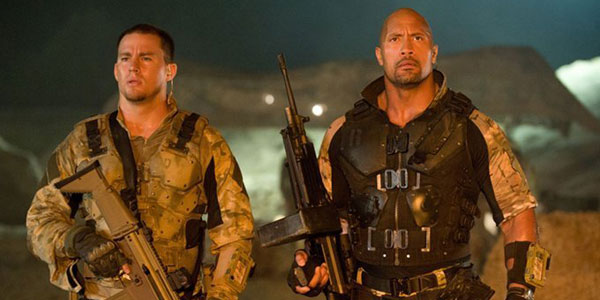 News just broke that GI Joe Retaliation, originally scheduled to be released in four weeks, has been pushed back to March 29, 2013 to be converted to 3D.  This is not good news for Joe fans…

Update: Here is the statement from Hasbro about the future of the toy line for the movie

“G.I. Joe is an ongoing consumer franchise and therefore there is merchandise available to consumers.  There is a limited amount of G.I. Joe Retaliation product at retail now, but in light of the movie moving out to March 29, 2013, the majority of the movie line will be made available early next year in time for the film’s release.”

It’s not uncommon for movies to get pushed back, for any number of reasons.  But when a movie gets delayed a month before the intended release, that usually points to only one desperate sign– the movie is terrible.

I have loved every piece of marketing for Retaliation thus far, from the awesome trailers to the great one sheets that debuted last month, to (most of) the new toy line… but I can’t help but think a last-minute move like this can only be justified by the movie needing a massive overhaul that goes way beyond adding some 3D gimmicks.

I mean, we are five days away from the major product launch for Retaliation on the 28th– there’s no way that would all be thrown to the wayside so quickly unless there was an urgent need to do so.  Keep in mind, this isn’t an absolute sign that things are as grim as they seem… it’s quite possible the suits at Paramount are the only ones who wouldn’t be happy with the current film, and considering they green lit Transformers 2 and 3, to me that says one of two things: A.) they have bad taste in movies, or B.) Retaliation is absolutely terrible.

It kills me to have to write this, as GI Joe has always been that one property I adore more than any others, and everything about the new movie seemed like a great time.  But one thing is for sure– whatever Retaliation looks like right now, it’s bound to be a very different movie when it finally hits next year.

We will hopefully have an update soon regarding the toy line, which may or may not be due to hit shelves this Monday.