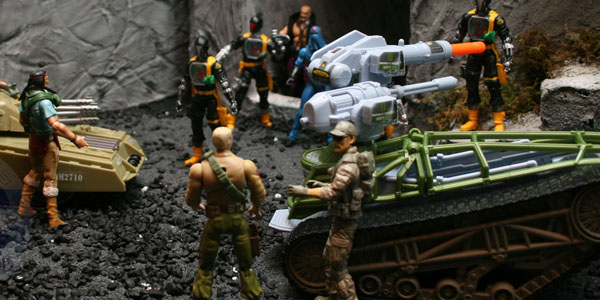 The first wave of vehicles in the GI Joe Retaliation line suffered from extreme cost cutting, does the new Tread Ripper continue this trend?

Thanks to the last-minute date change for the movie, the GI Joe Retaliation toy line was also unceremoniously shoved to a new, early 2013 release date. However, the second wave of Bravo vehicles, featuring the Tread Ripper, have been trickling into Target stores. According to the Hasbro team at Toy Fair, the Tread Ripper is one of the vehicles we’ll actually see in action on the big screen next March, and the toy is a brand new sculpt, although reminiscent of Cobra’s own small-scale tank, the HISS Scout. 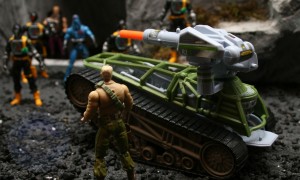 The setup of the Tread Ripper is simple, with a pair of tank treads (molded pieces, so once again fans of the functional treads on the Pursuit of Cobra HISS may be disappointed) attached to a chassis with a rollcage and two big guns mounted on top. The vehicle can comfortably fit any Joe driver– including the Clutch figure included here– and the canopy opens well in spite of the two cannons mounted on the back kind of getting in the way of opening the hatch completely.  The cannons are cast in a light grey and feature a spinning gattling gun and a missile launcher, respectively.

The vehicle looks cool, and I can see it looking very good on screen, however the colors of the vehicle, much like the previous Ghost Hawk II, seem a little too garish to pass off as a legit military vehicle. The sculpt is still quite nice, and it’s not as overtly toy-ish as the Ghost Hawk, with its bright orange missiles all over the place. So that’s a definite improvement over the first series of vehicles. 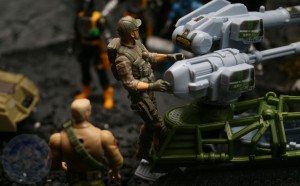 Sadly the driver, Clutch is just as frustratingly lousy as the other drivers. Sporting an all-new sculpt with some great looking, realistic military web gear and an awesome new headsculpt with sunglasses, a beard and a ball cap, Clutch should be a highlight of Joe figures. But Hasbro’s cost-cutting lead him to lose all but five points of articulation, leaving him pretty much useless, especially considering his pre-posed, mid walk stance (the bane of my existence as a toy collector is mid-walk figures, I can’t stand em!).  It’s a shame because the sculpting is top notch, with lots of great details applied to his fatigues and combat gear, but I just cannot abide a figure this low-tech being called a GI Joe.  I’m sure I’m not alone when I say I’d gladly pay extra bucks for vehicles with decent drivers, or even a fully-articulated kitbash driver instead of these hunks of newly-sculpted plastic.  Credit where credit is due, Hasbro was decent enough to give these garbage drivers ball joint necks, so their heads are easy to swap onto vastly superior bodies from the Retaliation or any other modern era Joe figure. Clutch’s head looks particularly nice on the Ninja 3-pack Beach Head body, so that’s how he’s staying for me.

It seems like a shame that every aspect of Retaliation has been plagued with compromise and half-measures. From the embarrassing eleventh hour delay on the movie, to the quality cuts seen in the toy line, even the best Retaliation toys don’t feel like something I can completely get behind. Hasbro set the bar very high with their amazing Pursuit of Cobra and 30th Anniversary toy lines, and the Retaliation line, while good in its own right, is such a step down from the pedigree of toys the preceded it it’s impossible to overlook. 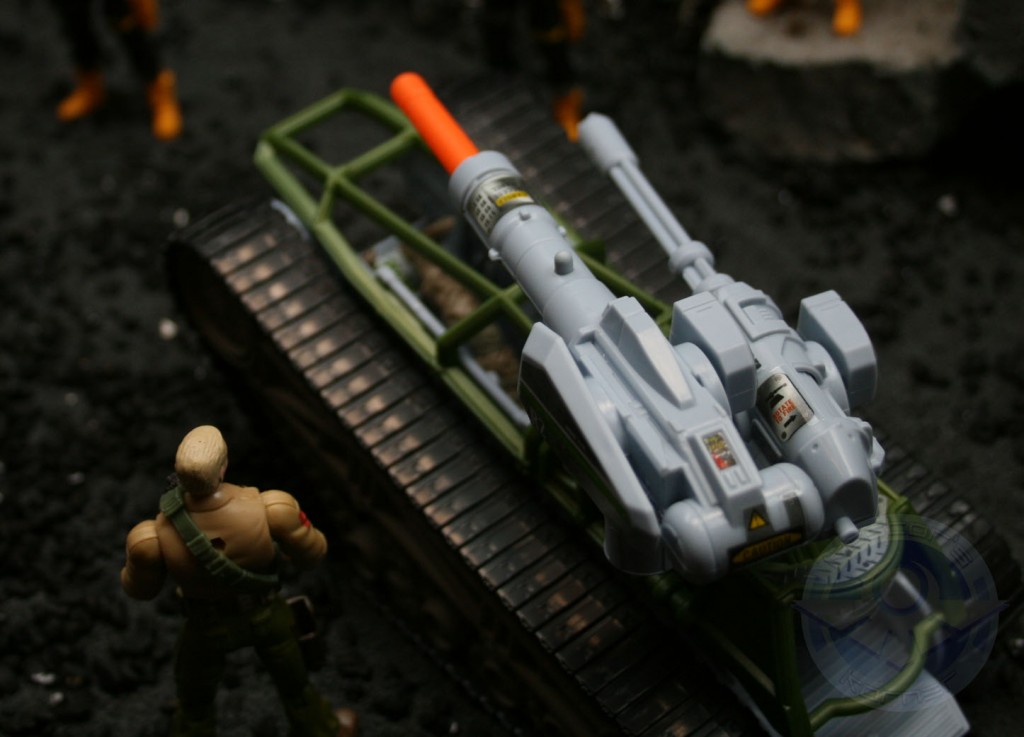 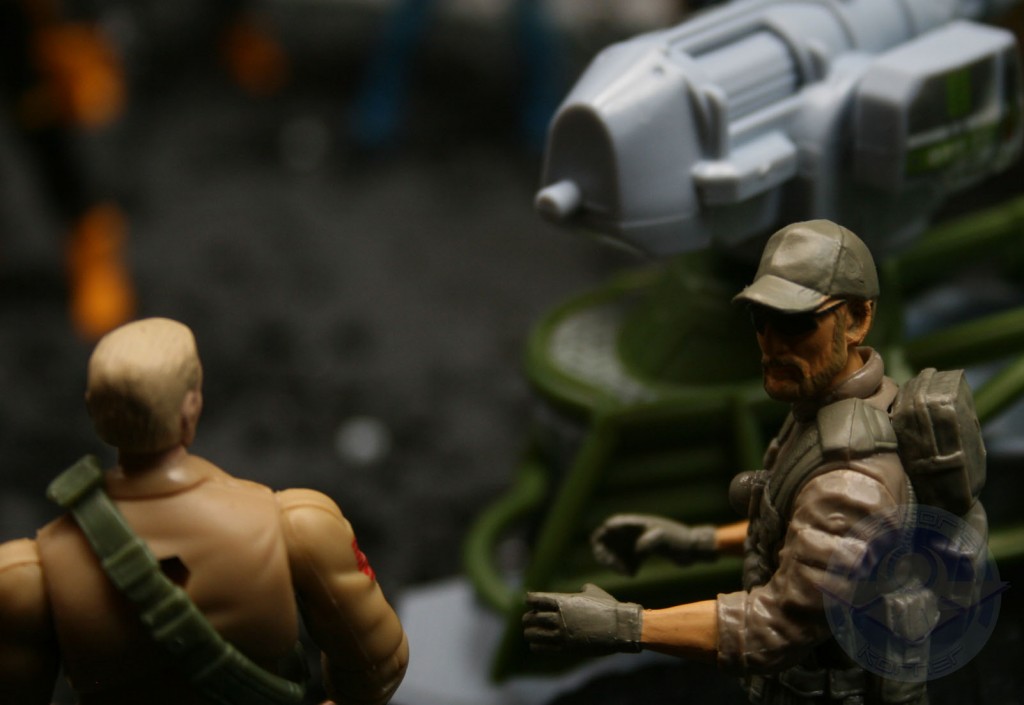 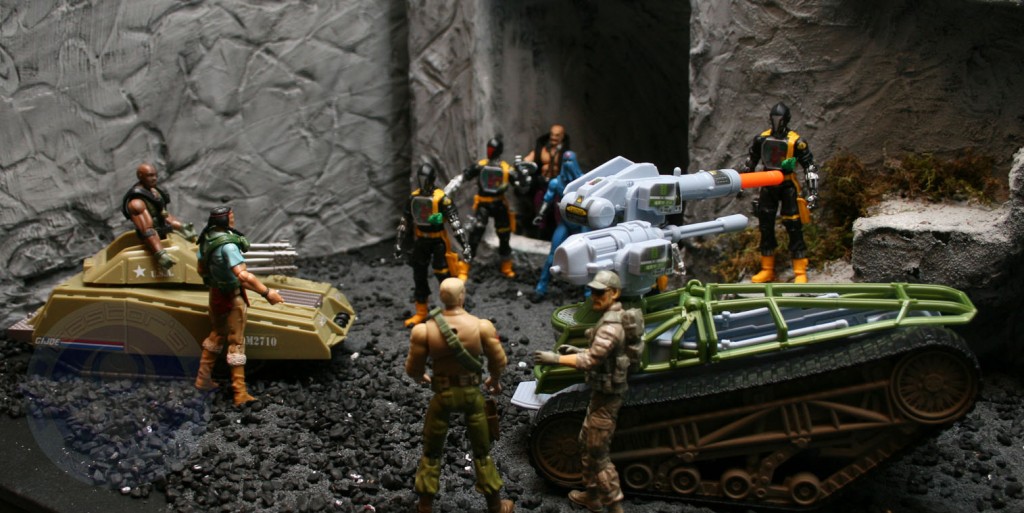 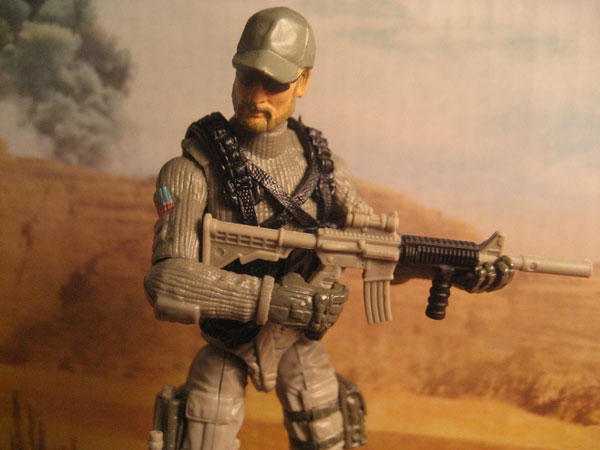 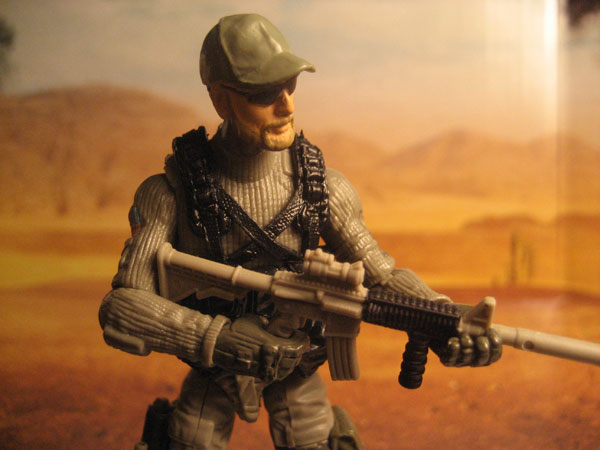 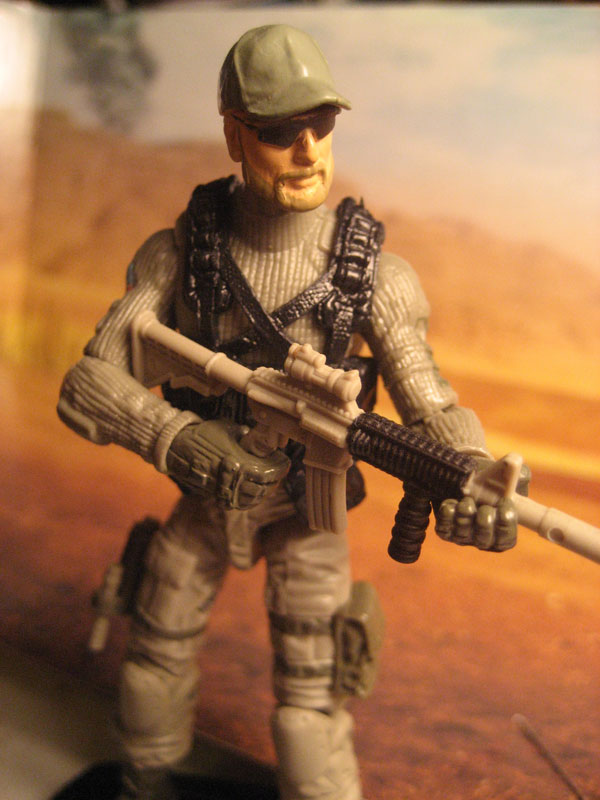