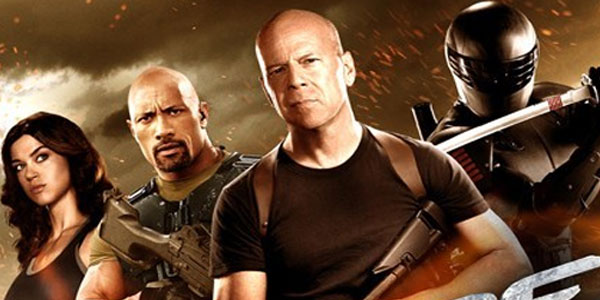 Is there any way the GI Joe sequel can actually be as good as the trailers make it look?

The eleventh-hour delay of GI Joe Retaliation, just a month before its original June 2012 release date, is not a good sign. The fact that Paramount would pull the cord that late in the game is a pretty sure sign the movie is awful– especially considering the Paramount folks responsible for the delay are the same ones who did release Battleship, so that shows you what kind of low expectations Retaliation failed to reach.

So, why do the trailers for Retaliation continue being so awesome? The latest one below, a new international trailer, sports some amazing new footage that feels like it’s ripped straight out of the 80’s cartoon and Larry Hama’s Marvel comics run.  Giant, city-destroying satellites in space, complete with the big, ol’ Cobra logo on the side… That awesome bike the splits apart into a hail of missiles… the cliff-side ninja battle– this trailer is amazing, in that it’s getting me very excited for a movie almost sure to be a letdown.

How can this movie suck??? I want to be wrong so bad. Retaliation has a solid cast on its side, and everything we’ve seen thus far– from the costume designs to the big set pieces to the goofball tech– all feel very faithful to the Real American Hero we know and love.  Maybe GI Joe: Retaliation really will be a kick-ass one-two punch of popcorn entertainment?  Could it be that the taste of the Paramount execs– responsible for dreck like Battleship and the Transformers series– didn’t know what to do with a good movie on their hands??  The March 2013 (re)release date is a lot closer than it seemed in June, and this new trailer has done nothing but get me more pumped for this flick.