GODZILLA is a Smashing Good Time 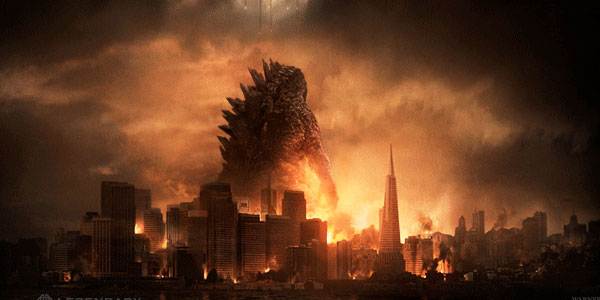 The King of Monsters returns to the big screen in a spectacle-filled– though not quite spectacular– new movie.

Let me get this out of the way up front– I really, really liked the new Godzilla.  While not all of the pieces of this big budget reboot of the classic monster movie franchise come together– thanks to a sub-par script and some lackluster performances– the overall effect delivers loads of giant-sized popcorn movie fun.  What the movie gets right, it gets perfect… and thankfully that includes all the core traits that make for a good Godzilla movie.

When it comes to modern mega-scale blockbusters, it’s all too easy to lose sight of true movie magic.  So many films pile on CGI effects and huge set pieces so liberally, we as the audience are left totally burned out long before the movie is over.  Gareth Edwards’ Godzilla bucks this trend by taking a more old fashioned approach, using the art of withholding to tease us for much of the movie’s run time.  We get bits and pieces of Godzilla and the other monsters (yes, there’s more), we see the ruined cities left in the wake of their gigantic battles, and we see their scraps on TV monitors… but it’s not until the end that we get a good, long look at these fantastic beasts.  By taking this approach, Edwards keeps the audience hooked and craving more, so by the time the monsters converge on San Francisco for their final fight, we’re fully invested and ready for the big payoff, instead of desensitized by it.

The structure of the movie is great in this respect, as Edwards taps into that same sense of wonder and movie magic which we see in Steven Spielberg’s classic blockbusters, and just to drive the point home, we’re treated to a number of visual nods to the legendary director’s biggest movies, such as Jurassic Park and Jaws.

None of this would matter, though, if the new Godzilla wasn’t worth watching as a character, but he very much is.  The movie offers a unique take on the colossal creature– he’s not the result of atomic mutation, but something older than time, part of an extinct race of giants that roamed the Earth in pre-Prehistoric times.  Now, Godzilla exists to maintain balance in the world.  The monster– who in the past has been a hero, a villain and everything in between– is essentially Earth’s “bouncer” in this story.  If you’re causing trouble, then he’s got a problem with you… and his lumbering gait, angry face and generally foul disposition perfectly illustrate that Godzilla is NOT someone you want to have a problem with.

The creature design is perfect, instantly recognizable as Godzilla (unlike the last American attempt at bringing the monster to the big screen in the 90s), and while he is a computer generated creation, Godzilla maintains the iconic proportions of the classic Japanese “man in suit” monster.  He’s joined in the movie by his monstrous opponents, the MUTOs, a pair of nuclear-powered creatures that share an equally strong (although much more modern) sense of design, and who serve as formidable opposition to Godzilla’s might. One of my favorite nuances of the movie stems from the MUTOs not really being evil– these are just huge animals, and they are trying to do what animals do.  They’re not wreaking havoc out of malice or anger, only attempting to ensure their survival and propagation, and Edwards includes a few scenes which allow us to feel for these monsters, adding a layer of sadness to the knock-down, drag out brawl with Godzilla that we know is inevitable.

While Godzilla is for all intents and purpose our hero, that by no means suggests he’s fighting to defend humanity.  The site of each monster attack is left absolutely devastated, by both the MUTOs and Godzilla himself… Godzilla’s not out to destroy anything except the other monsters, but he has a complete disregard for any structures, armies or bystanders that happen to be in the way of his mission.  That disregard for humans is something me and big guy shared for much of this movie, honestly.  While the monster stuff is incredible, Godzilla is unfortunately saddled with a mostly lame human-scaled story, following  Aaron Taylor-Johnson’s Navy soldier Ford Brody as he attempts to make his way home to his family in San Francisco.

The main through line of this story never really comes together, thanks to the convenient twists which guarantee Brody will find himself smack dab in the middle of each giant monster battle set piece, and the rudderless character arcs of his family back home, especially the utterly wasted Elizabeth Olsen as his wife Elle.

And the “human stuff” feels less impressive when you realize there’s so many other avenues that could have been explored to make for a more satisfying central story.  On one end of the spectrum, we have Ken Watanabe’s Dr. Serizawa, head of the scientists that have been studying these giant monsters for years in secret.  Watanabe goes absurdly broad with his performance, mugging for the camera with silent, befuddled amazement at what he’s witnessing, and offering aggrandized postulation about what these monsters are actually all about.  Serizawa is campy and (I think intentionally) hilarious, and Watanabe plays him like he could fit into any one of the classic Toho Godzilla movies over the past 60 years.

But on the opposite side, we’re also treated to some remarkably strong– and tragically too short– work from Bryan Cranston and Juliette Binoche as Brody’s parents, working at a nuclear plant in Japan whose destruction is tied to the monsters’ origin.  Both actors do amazing work in the time they’re given, delivering full characters and drama that feel compelling and grounded, in a way that Brody, his family and the general do-goodery of his military allies never does.  Cranston’s driven, obsessed Joe Brody is so watchable, especially as he goes through a complete meltdown after discovering the truth of the plant explosion and the monsters, I can’t help but think what a more interesting and dramatic story we would have if he had been our protagonist.

Everybody else in the movie falls squarely in the middle, lacking the gravitas of Cranston and the tongue-in-cheek fun of Watanabe, and it doesn’t do the cast any favors.  While the momentum of the monsters on their road to a truly epic rumble is enough to keep the movie moving forward, the “people stuff” does run the risk of slowing things down too much on more than one occasion.  In the end, these puny humans don’t do much more than provide a worm’s eye view of Godzilla and his nemeses. But sticking with this small-scale human perspective on the great beasts and the carnage they cause is another way Edwards withholds from us the true scope of what’s going on, until the final combat begins.

In my opinion, all is forgiven when we DO finally get to that big fight.  The final battle is great, filmed in the Toho tradition with lots of wide shots to show off the maximum urban devastation surrounding our fighters.  The MUTOs fight like animals, but Godzilla is something different, rolling in delightfully human-like moves to his attacks.  By the time Godzilla unleashes his atomic fire breath– with half of San Francisco in utter ruin– I nearly stood up and cheered involuntarily.  The fight is huge in scope, and maintains the Toho “man in suit” aesthetic while remaining astonishingly realistic and grounded (for a giant monster movie anyway).  And since we’ve been waiting for this scrap for the movie’s entire run time, what we get feels extra satisfying, as all our pent-up excitement finally pays off.

Godzilla and his city-leveling battles were strong enough to win me over completely by the time the credits rolled.  Gareth Edwards proved to me that he really knows how to put a movie together, and I very much respected his thoughtfulness in regards to the pacing of his reveals, the pathos of his monsters, and yes, even a bit of the true, real-world repercussions of mass devastation on this scale which we get to witness.

Godzilla is a very different movie than the trailers lead me to believe, and I’m glad for that.  While much of the movie maintains a serious tone– only straying into campiness with Watanabe’s character and a traditional Toho throwback final scene– it was a lot more aware of its own fun that I had expected.  The new Godzilla is not the fairly somber meditation on nuclear warfare that made the original 1954 film an all-time classic… but it makes a fantastic entry that stands shoulder to massive shoulder alongside any of Godzilla’s greatest monster battle movies.