Godzilla Vinyl Wars is a collaboration between Japan’s classic Sofubi manufacturers and cutting-edge toy maker MEDICOM Toy. Each release in GVW is a reproduction of a classic Toho Sofubi from the ’60s through today, released legitimately for Western collectors for the first time ever.

The bright green 1967 Sofubi is modeled after the kaiju depicted in Son of Godzilla, a film which helped bring Godzilla to younger audiences. The GMK Sofubi is a modern take on the character, styled after Godzilla’s grittier, spikier appearance in the 2001 film Godzilla, Mothra and King Ghidorah: Giant Monsters All-Out Attack. 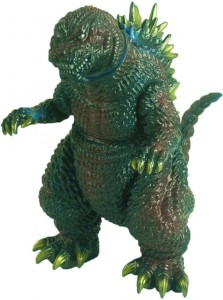 Each hand-crafted, hand-painted Sofubi is exclusive to comic book specialty shops and available to pre-order at any comic shop from page 513 of the June PREVIEWS catalog. Find a shop at www.comicshoplocator.com.